This is the second post about optimization, in the first one I tried to give you the big picture of my ideal workflow and what are the tools I like best when I'm trying to figure out where to start. 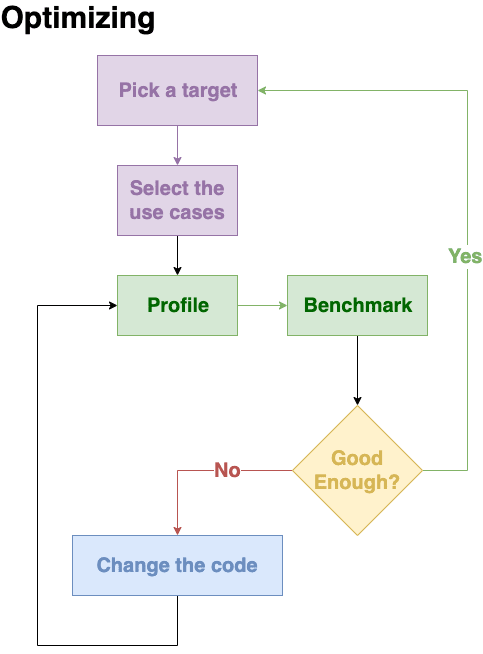 Let's assume we already decided what we want to optimize for, we have our testcases ready and we managed to profile and prepare the benchmarks.

What to do now?

To keep things simple we focus again only on two subsets among the possible optimization targets: single execution time and total number of allocations.

In order to speed up something we have a number of strategies, here I'm giving you a list in order of expected gains.

Sometimes you start with a naive implementation that works but has a cubic complexity or worse, sometimes you picked a refined O(ln(n)) algorithm and you forgot to make sure it doesn't have constant overheads that dwarf the rest of it for your specific workload.
Thinking again about what you are solving can lead to surprising gains, the best algorithm on paper might not be the right one for you sometimes.
Sometimes having better cache locality and more compact code has more impact than using a theoretically optimal algorithm.

Most architectures support SIMD in a way or another.

When you are going through this path cargo-asm helps a lot seeing what is going on and you should look for cache-misses and branch-misprediction statistics in your profiler if you aren't getting the performance you expect.

Last but not least you should be careful on which instruction sets you are using. Modern x86_64 provides extremely powerful instructions in the avx512f set, but either you use them extensively or you might hit significant slowdowns due the cpu-state change.

Most CPUs come with at least 2 cores and/or 2 or more hardware threads nowadays.

Using threads is the first clear example of throwing in more resources to get more performance: using additional threads usually means you end up using more memory and spend some cpu cycles on synchronization, the Amdahl's_law usually models well the theoretical optimum you can reach.

The rust standard library comes with a good set of built-ins you can use, but there is an ecosystem of external crates to help further, among those my favorites are:

If your application is doing a good amount of I/O, you might want to explore asynchronous programming patterns. Under the hood you might deal with coroutines or threadpools, the API you are facing is still the arguably easy one based around futures, the best runtimes I know are:

The asynchronous programming features provided by rust try to be nearly zero-cost abstractions, yet you have to deal with an additional cognitive burden when using it, so I suggest to not jump on it without considering all the other options.

Remove slowdowns from the critical path

Once you managed to use the optimal algorithms, simdify lots of code and split the workload over a pool of threads, you will start seeing unexpected impact of your changes:

Halving time spent in an hot path that comes in the top 5 from perf report or equivalent, does not map to the expected reduction of the overall execution time.

This happens when we split the workload over multiple threads, once you start doing this you need to pay additional care when profiling on what is going to run in parallel and what is painfully serial.

I decided to not focus much on how to reduce the resident set or the peak memory usage since there isn't much to say:

The number of allocations is a more interesting problem:

Within reason you might want to have stack-allocated buffers to use instead of having Vecs and Boxes around, rust makes fairly easy pass around references, even across threads (as shown by crossbeam scope)

I provided some pointers on how to optimize, and, as for the previous post, I intentionally avoided making examples to keep the whole thing reasonably compact.

During the next posts I'll start to focus on specific situations that happened while developing rav1e and provide some example usage of some of the tools.

References to Literals in Rust?!

Once suspended, luzero will not be able to comment or publish posts until their suspension is removed.

Once unsuspended, luzero will be able to comment and publish posts again.

Once unpublished, all posts by luzero will become hidden and only accessible to themselves.

If luzero is not suspended, they can still re-publish their posts from their dashboard.

Once unpublished, this post will become invisible to the public and only accessible to Luca Barbato.

Thanks for keeping DEV Community 👩‍💻👨‍💻 safe. Here is what you can do to flag luzero:

Unflagging luzero will restore default visibility to their posts.