Recently I decided to brush up on my computer science foundation by enrolling in a popular online computer science course. As the final project of the first module, we were tasked with writing a basic terminal program in Python and documenting our journey in a blog post. I settled on modeling one of my favorite television game shows, Who Wants to Be a Millionaire? 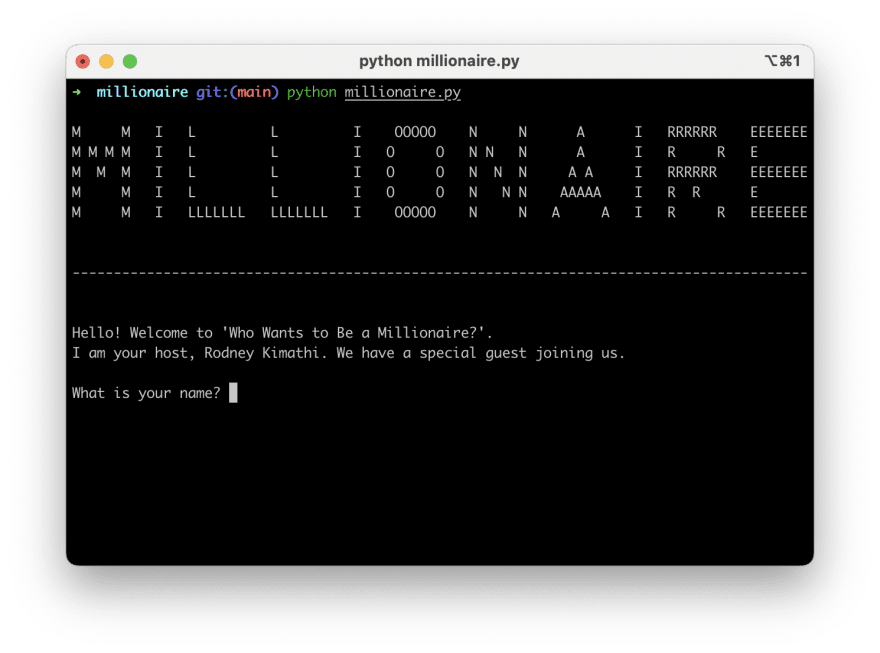 I took an object-oriented approach for the implementation. There are three classes - Question, Answer, and Prize - that are used to model the main components of the game. Two helper scripts, setup.py and play.py, control the game setup and gameplay mechanics respectively. The entry point, millionaire.py, is in charge of welcoming the player and revealing their total prize money at the end of the game.

Here is the repository for the program. Clone it and play the game, then share the prize money you won in the comments section. No cheating!

Some improvements can be made to the program to make it more true to life:

This was a fun project to work on. Thank you for your time!

Managing the directory structure of a large scale FastAPI App

Once suspended, krodney will not be able to comment or publish posts until their suspension is removed.

Once unsuspended, krodney will be able to comment and publish posts again.

Once unpublished, all posts by krodney will become hidden and only accessible to themselves.

If krodney is not suspended, they can still re-publish their posts from their dashboard.

Once unpublished, this post will become invisible to the public and only accessible to Rodney Kimathi.

Thanks for keeping DEV Community 👩‍💻👨‍💻 safe. Here is what you can do to flag krodney:

Unflagging krodney will restore default visibility to their posts.