The Observer is a behavioural design pattern that lets us define a subscription mechanism to notify multiple objects about any events that happen to the entity they're observing.

The Observer pattern allows objects to notify their observers when their internal state changes, meaning that a single class has to be aware of the entities that observe it. It also needs to communicate to those observers about alterations in the subject's state. Further, the observers should be notified automatically.

Let's imagine that we have an online store. We have the entities Customer and Store. One of our customers has a very peculiar taste and is interested in a particular brand of super universal remotes. These remotes should be available in our store very soon.

The customer could visit the store every day and check product availability. But while the product is still en route, most of these trips would be pointless.

On the other hand, the store could send tons of emails to all customers each time a new product becomes available, saving some customers from endless trips to the store. At the same time, it'd upset other customers who aren't interested in new products.

An object with an observed state is commonly known as a subject, but since it notifies other objects about state changes, we'll call it a publisher. All other objects that want to track changes to the publisher's state are called subscribers.

The Observer pattern suggests that we add a subscription mechanism to the publisher class so individual objects can subscribe to or unsubscribe from a stream of events sent by the publisher.

In reality, this mechanism consists of an array field for storing a list of references to the subscriber objects and several public methods which allow adding subscribers to and removing them from that list. 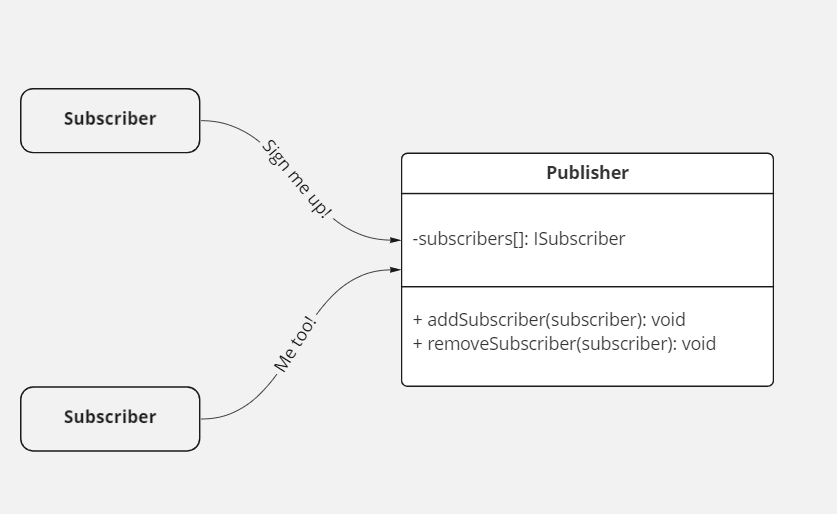 Now the publisher goes over to its subscribers and calls their specific notification method.

Real-world applications might have dozens of different subscriber classes interested in tracking events of the same publisher class. We wouldn't want to couple the publisher to all of those classes.

If our application uses several different publisher classes, we can make all publishers use the same interface. This interface would only need to describe a few subscription methods. The interface would allow subscribers to observe the publishers' states without coupling to their concrete implementations.

In its base implementation, the Observer pattern has four subscribers: 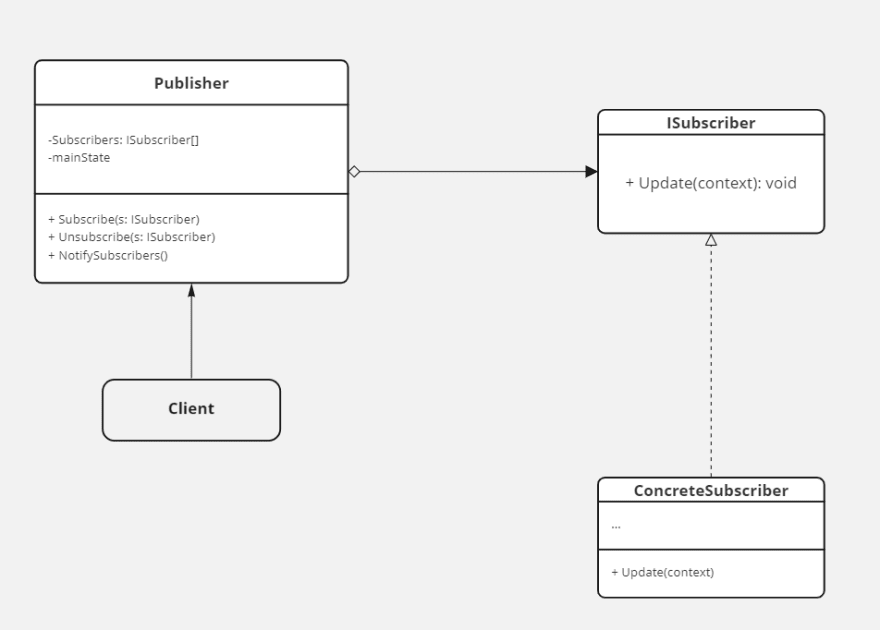 To demonstrate our observer, let's imagine that we are going to implement a system that tracks the fluctuating prices of goods in our local farmer's markets.

On some days, the goods will be more expensive than on other days, due to factors like the season, the size of the harvest or the quality of the goods themselves. Further, we need to allow restaurants to watch the prices and place an order when the price of a particular item falls below a specified threshold, which is different for each restaurant.

First, let's define our Subject participant abstract class Goods, which needs to implement the methods by which it can attach or detach observers and keeps track of a certain good's current price:

We also need some ConcreteSubjects which represent the price of specific products, in this case, Cucumber and Mutton.

Now we can define our Observer participant. Remember that restaurants want to observe the vegetable prices, so our Observer will naturally be an interface IRestaurant, and this interface must define a method by which its implementors can be updated:

Finally, we need our ConcreteObserver class, which represents specific restaurants. This class must implement the Update() method from IRestaurant:

The restaurants will only buy goods if the price dips below a certain threshold amount, which differs per restaurant.

To put this all together, in our Main() method we can define a few restaurants that want to observe the price of cucumbers and mutton, and then fluctuate the price:

If we run the application, we will see that as the price changes, the restaurants get notified, and if the price drops below each restaurant's threshold, that restaurant wants to place an order. Below is the output: 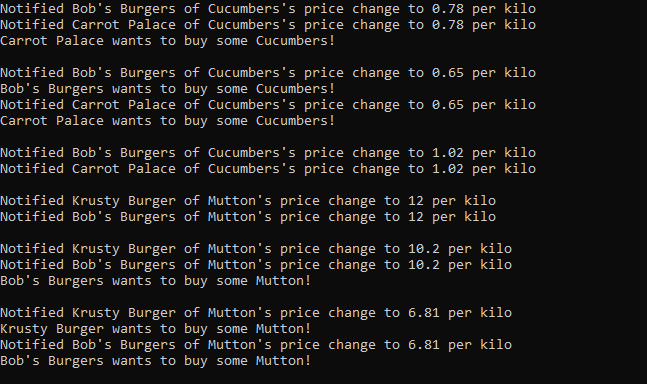 As you can see, the subject-object (Cucumbers and Mutton) automatically notify the observer restaurants of their price changes. which can then decide what to do with that information.

Difference Between Mediator and Observer

When you are confused about whether you have a Mediator or an Observer remember that the Mediator can be implemented differently. For example, you can permanently link all components to the same mediator object. This implementation won't resemble the Observer pattern but will still be an instance of the Mediator pattern.

Now if you have a program where all components are publishers, allowing dynamic connections between each other, you have a distributed set of Observers, since there is no centralized Mediator object.

Pros and Cons of Observer Pattern

The Observer pattern seeks to allow Observer objects to automatically receive notifications (and possibly change their own state) when a Subject class changes its state. In short, should the Subject change, the Observers will be notified about said change.

The Observer design pattern is helpful in many ways and is quite flexible if appropriately used. However, it's worth noting that the Observer pattern, along with the rest of the design patterns presented by the Gang of Four, is not a panacea or a be-all-end-all solution when designing an application. Once again it's up to the engineers to consider when to use a specific pattern. After all these patterns are useful when used as a precision tool, not a sledgehammer.

How to use Twitter OAuth 2.0 and Passport.js for user login

Build a Job Board with Next Using Xata and Cloudinary