The Bridge is a structural design pattern that lets us split a large class or a set of closely related classes into two separate hierarchies -abstraction and implementation- which can be developed independently of each other.

The Bridge design pattern decouples an abstraction from its implementation. As a result, the abstraction and implementation can be developed and changed independently. This pattern's primary use is to enable the separation of concerns.

In effect, the Bridge maintains a reference to both abstraction and implementation but doesn't implement either, thus allowing the details of both to remain in their distinct classes.

Imagine that we are working on a CAD application. Currently, the application has an IShape class that provides functions for the various geometrical shapes, and some subclasses: Circle, Triangle and Rectangle.

The problem occurs because we're trying to extend the shape classes in two independent dimensions, form-wise and colour-wise.

The Bridge pattern attempts to solve this problem by switching from inheritance to object composition. What this means is that we extract one of the dimensions into a separate class hierarchy, so that the original classes will reference an object of the new hierarchy, instead of having all of its state and behaviours within one class.

Following this approach, we can extract the colour-related code into its class with three subclasses: Red, Green and Blue. The IShape interface then gets a reference field pointing to one of the colour objects. Now the shape can delegate any colour-related work to the linked colour object. That reference will act as a bridge between the IShape and IColor classes. From now on, adding new colours won't require changing the shape hierarchy, and vice versa.

Now that we have established a simple example with shapes and colours, let's decipher the meaning of the terms Abstraction and Implementation.

Note that we are talking about interfaces and abstract classes of C#. These aren't the same things.

Generally speaking, we can extend such an application in two independent directions:

In the worst-case scenario, the application might look like a big ball of mud, where hundreds of conditionals connect different types of interfaces and implementations all over the code.

We can bring order to this chaos by extracting the code related to specific interface-platform combinations into separate classes. However, soon we'll discover that there are lots of these classes. The class hierarchy will grow exponentially because adding a new GUI or supporting a different API would require creating more and more classes.

The abstraction object will control the appearance of the application, delegating the actual work to the linked implementation object. Different implementations are interchangeable as long as they follow a common interface, enabling the same GUI to work under Windows and Linux.

As a result, we can change the GUI classes without touching the API-related classes. Moreover, adding support for another operating system only requires creating a subclass in the implementation hierarchy.

In this basic implementation, the Bridge pattern has 5 participants: 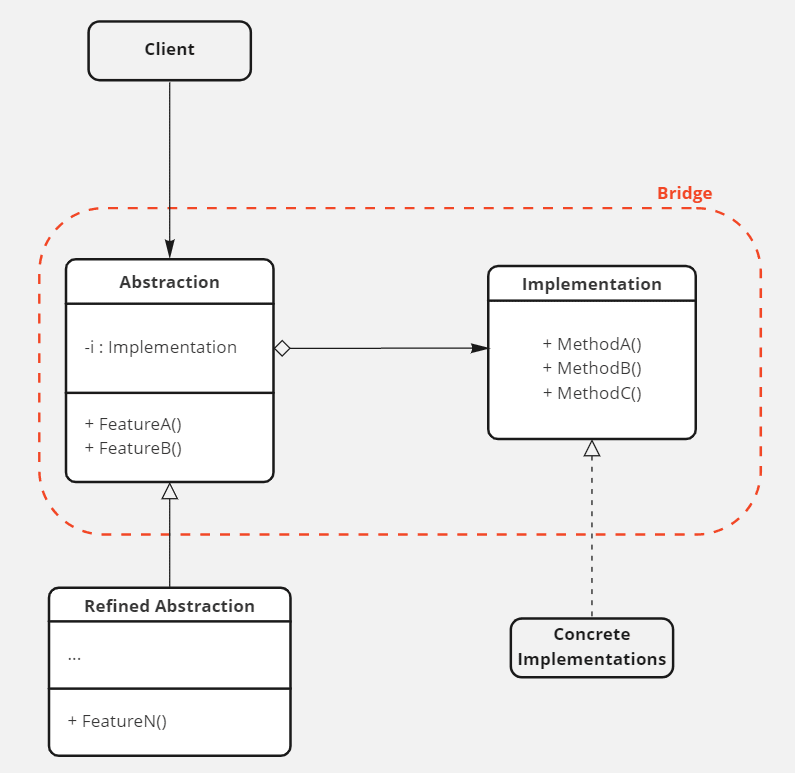 To demonstrate how the Bridge pattern works, we are going to create an ordering system for people who have special dietary needs. Many people have diseases like Celiac diseaseor AGS that prohibit them from consuming certain foodstuff. Consequently, it can be difficult for a person with such issues to order a meal from restaurants, since often they don't provide the proper special-needs meal with the person's needs (and even if they do, the environment in which the food is prepped is often not properly ventilated or sterilized, making cross-contamination likely).

The idea goes like this: I should be able to pick a type of special meal and pick a restaurant, without needing to know exactly what either of those things is (e.g. a meat-free meal from a diner or a gluten-free meal from a fancy restaurant).

If we used a traditional inheritance model, we might have the following classes:

But what if we also need to keep track of what kind of restaurant the order came from? There is no real relation between the meal and the restaurant, but it might still be part of the model.

In this case, we might end up with a convoluted inheritance tree:

Here we're modelling two orthogonal properties (meat-free/gluten-free and diner/fine dining) but we need three interfaces and six classes. We can simplify this using the Bridge pattern.

The Bridge pattern seeks to divide the responsibility of these interfaces such that they're much more reusable. With that we will end up with something like the following;

Let's expand this to full implementation of the Bridge pattern. First, we need our Implementation participant who will define a method for placing an order:

We also need the Abstraction participant, which will be an abstract class and will define a method for sending an order and keep a reference to the Implementation:

Finally, we need to implement our ConcreteImplementation participants, which are the restaurants themselves:

Finally, we need a Main() which uses the Bridge to create different orders and send them to different restaurants:

Here's a screenshot of the demo app in action:

Applicability of the Bridge Pattern

The Bridge pattern is quite helpful in the following scenarios:

Avoiding coupling between abstraction and implementation

Although it's optional, the Bridge pattern lets us replace the implementation object inside the abstraction. It's as easy as assigning a new value to a field.

By the way, this is the main reason why people confuse the Bridge pattern with the Strategy pattern. Remember that a pattern is more than just a certain way to structure your classes. It can also communicate intent and a problem being addressed.

Having extensible Abstraction and Implementation

The Bridge suggests that we extract a separate class hierarchy for each of the dimensions. The original class delegates the related work to the objects belonging to those hierarchies instead of doing everything on its own.

Changes in Implementation can affect the client

The Bridge pattern can help you avoid any changes done in the implementation that would affect your client, or there wouldn’t be a need to recompile the code on the client’s side after some changes in implementation.

Organizing and splitting a monolithic class with numerous functionality alternatives

The bigger a class becomes, the harder it is to figure out how it works, and the longer it takes to make a change. The changes made to one of the variations of functionality may require making changes across the whole class, which often results in making errors or not addressing some critical side effects.

The Bridge pattern lets you split the monolithic class into several class hierarchies. After this, you can change the classes in each hierarchy independently of the classes in the others. This approach simplifies code maintenance and minimizes the risk of breaking existing code.

Pros and Cons of the Bridge Pattern

In this article, we have discussed what is the Bridge pattern, when to use it and what are the pros and cons of using this design pattern. We then examined some use cases for this pattern and how the Bridge relates to other classic design patterns.

It's worth noting that the Bridge pattern, along with the rest of the design patterns presented by the Gang of Four, is not a panacea or a be-all-end-all solution when designing an application. Once again it's up to the engineers to consider when to use a specific pattern. After all these patterns are useful when used as a precision tool, not a sledgehammer.

7 Awesome Free APIs for Your Next Node.js Project

Test Your JavaScript Knowledge with These 12 Basic Quizzes!