Apache Kafka is our rocket, and the individual partitions provide order and structure to all work processes at every stage of the flight. But how many partitions should we set up? A good question, which should be answered before we deploy Kafka to production. And also a question that the following blog post addresses. 3,2,1 – launch. 🚀

Why do we need partitions in Apache Kafka at all?

In Kafka, we use partitions to speed up the processing of large amounts of data. So instead of writing all of our data from a topic to one partition (and thus one broker), we split our topics into different partitions and distribute those partitions to our brokers. Unlike other messaging systems, our producers are responsible for deciding which partition our messages are written to. If we use keys, then the producer distributes the data such that data with the same key ends up on the same partition. This way, we can guarantee that the order between messages with the same key is guaranteed. If we do not use keys, then messages are distributed to the partitions in a round-robin manner.

Furthermore, we can have at most as many (useful) consumers in a consumer group as we have partitions in the topics they consume. The bottleneck in data processing is often not the broker or the producer, but the consumer, which must not only read the data, but also process it. 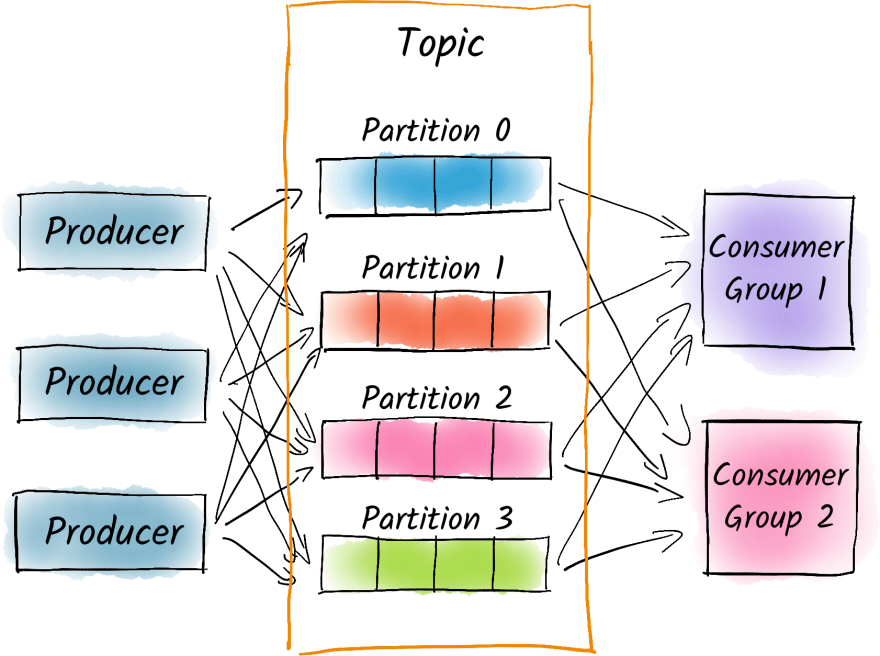 In general, the more partitions, the

There are no hard limits on the number of partitions in Kafka clusters. But here are a few general rules:

This reduces downtime in case something does go wrong. But beware: It should not be your goal to push these limits. In many “medium data” applications, you don’t need any of this.

As already described at the beginning, there is no “right” answer to the question about the number of partitions. However, the following rules of thumb have become established over time:

In my consulting practice, 12 has become a good guideline for the number of partitions. For customers who process very little data with Kafka (or need to pay per partition), even smaller numbers can make sense (2,4,6). If you are processing large amounts of data, then Pere’s Excel spreadsheet that he has made available on GitHub will help: kafka-cluster-size-calculator.

This blog post was written by a guest-author from Community Stream: by developers, for developers.

Looking to publish with us or share your Kafka Knowledge?
Join our Discord to take part!

As an IT trainer and a frequent Blogger for Xeotek, Anatoly Zelenin teaches Apache Kafka to hundreds of participants in interactive training sessions. For more than a decade, his clients from the DAX environment and German medium-sized businesses have appreciated his expertise and his inspiring manner. In that capacity, he is delivering trainings for Xeotek Clients as well. His book is available directly from him, from Hanser-Verlag, Amazon. You can reach Anatoly via his e-mail. In addition, he is not only an IT Consultant, Trainer and Blogger but also explores our planet as an adventurer.

Kadeck
Thoughts on the future of data, from the people and us.

Once suspended, kadeck will not be able to comment or publish posts until their suspension is removed.

Once unsuspended, kadeck will be able to comment and publish posts again.

Once unpublished, all posts by kadeck will become hidden and only accessible to themselves.

If kadeck is not suspended, they can still re-publish their posts from their dashboard.

Once unpublished, this post will become invisible to the public and only accessible to Alexander Hertwig.

Thanks for keeping DEV Community 👩‍💻👨‍💻 safe. Here is what you can do to flag kadeck:

Unflagging kadeck will restore default visibility to their posts.