This is an introductory tutorial for anyone interested in building their own AI to play in a game. All you need to start is some familiarity with programming in Python. This is part 1 of a series originally published on the Coder One blog.

We'll be using a custom game environment called Dungeons and Data Structures. It's inspired by the classic NES game Bomberman, but with some variations. This game was used for an AI game competition called the AI Sports Challenge organized by Coder One.

In this first part of the tutorial series, we'll cover:

In Dungeons and Data Structures, your goal is to either be:

You can take away an opponent's HP and earn points by using bombs to destroy wooden and ore (green) blocks. For a full description of the game rules, you can check the Dungeons and Data Structures Game Documentation.

You can do that by heading over to the Dungeons and Data Structures Repo, and downloading the package coderone-challenge-dungeon-0.1.6.tar.gz from the Releases page.

Install it by navigating to the working directory containing the package you just downloaded, and run in your terminal:

To check that your installation is working, run:

You should see a window similar to this pop up: 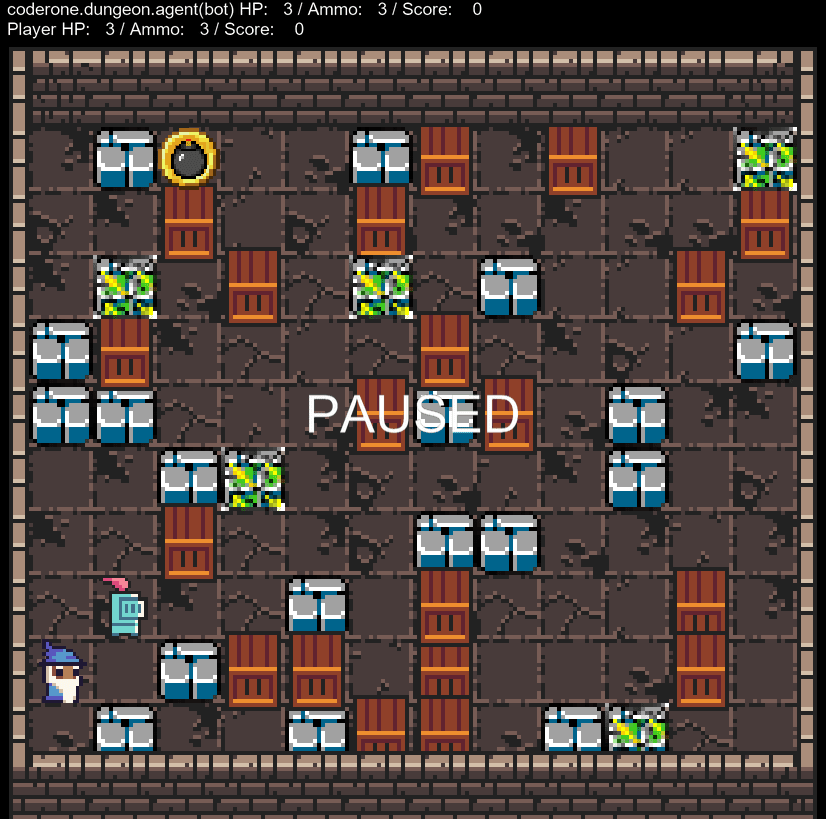 Press ENTER to un-pause the game. You'll be able to play as the knight, using the arrow keys ↑ / ↓ / ← / → and SPACE to place a bomb. You're playing against the default agent provided in the game (which does nothing but stand still). Close the window when you're done.

Setting up our starter agent

To create your own bot that interacts with this game, create a file in your working directory called my_agent.py. In this file, paste the following:

At a high level, the job of your my_agent.py script is to:

This basic starter agent will randomly choose an action from the list of those available.

Now save your file, and run in your terminal:

This will load up the game, and allow you to play against the bot whose behavior we defined in my_agent.py.

Here are some additional details on the earlier command we ran in the terminal:

--watch loads the game in a format where you can make live changes to your code.

--interactive allows you to play the game as well.

my_agent is the name of your bot's Python script that you want to play against.

Note: you will need at least two agents for the game to start. In the code above, my_agent is Player 1 (Wizard) and you are Player 2 (Knight). You can also try:

Feel free to play around with the starter code (e.g. try making a bot that only moves up).

Getting familiar with the game Environment

In the previous section, we mentioned that your bot receives two inputs: game_state and player_state. These variables contain information about the game environment and your player respectively. They both contain some useful information (a full list is available in the Game Documentation), but the most important ones for now are:

Below are some examples of use cases for these properties, given game_state and player_state. Have a go at filling in the code yourself, and checking them against the provided answers.

In addition to properties, game_state also contains some useful methods. The ones we'll use in this tutorial are:

Some more example use cases are provided below.

Feel free to try playing around with the environment and building your own agent! Otherwise check out Part 2 below.

If you've got any questions or feedback, feel free to let me know in the comments below.