Regression is a commonly used kind of machine learning for predicting numeric values.

Machine learning is based on statistics and math, and it's important to be aware of specific terms that statisticians and mathematicians (and therefore data scientists) use. You can think of the difference between a predicted label value and the actual label value as a measure of error. However, in practice, the "actual" values are based on sample observations (which themselves may be subject to some random variance). To make it clear that we're comparing a predicted value (ŷ) with an observed value (y) we refer to the difference between them as the residuals.

We can summarize the residuals for all of the validation data predictions to calculate the overall loss in the model as a measure of its predictive performance.

Regression is a form of machine learning in which the goal is to create a model that can predict a numeric, quantifiable value, such as a price, amount, size, or another scalar number.

For example, a company that rents bicycles might want to predict the expected number of rentals in a given day, based on the season, day of the week, weather conditions, and so on.

Bike-sharing is very popular albeit still new and experimental. Utilizing a mobile phone, a rider can sign up online, download a phone application, locate bicycles, and rent one. This model creates an entire ecosystem where nobody needs to talk or meet in person to start enjoying this service.

Train and evaluate a regression model

Regression works by establishing a relationship between variables in the data that describe characteristics (known as the features) of the thing being observed, and the variable we're trying to predict (known as the label). In this case, we're seeing information about days, so the features include things like the day of the week, month, temperature, rainfall, and so on, and the label is the number of bicycle rentals.

To train the model, we start with a data sample containing the features as well as known values for the label - so in this case, we need historic data that includes dates, weather conditions, and the number of bicycle rentals. We'll then split this data sample into two subsets.

The use of historic data with known label values to train a model makes regression an example of supervised machine learning.

Let's take a simple example to see how the training and evaluation process works in principle. Suppose we simplify the scenario so that we use a single feature, average daily temperature, to predict the bicycle rentals label.

We start with some data that includes known values for the average daily temperature feature and the bicycle rentals label.

Now we'll take the first five of these observations and use them to train a regression model (in reality, you'd randomly split the data into training and validation datasets - the split needs to be random to ensure that each subset is statistically similar)

Our goal in training the model is to find a function (let's call it f) that we can apply to the temperature feature (which we'll call x) to calculate the rentals label (which we'll call y). In other words, we need to define the following function:

Let's start by plotting the training values for x and y on a chart: 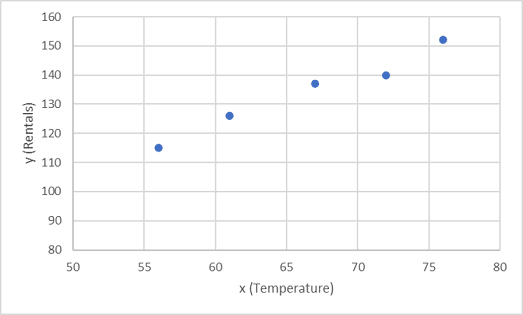 Now we need to fit these values to a function, allowing for some random variation. You can probably see that the plotted points form an almost straight diagonal line - in other words, there's an apparent linear relationship between x and y, so we need to find a linear function that's the best fit for the data sample. There are various algorithms we can use to determine this function, which will ultimately find a straight line with minimal overall variance from the plotted points; like this: 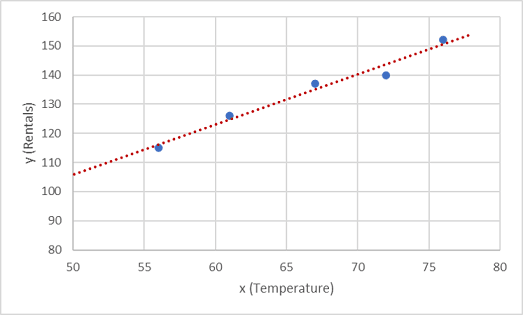 The line represents a linear function that can be used with any value of x to apply the slope of the line and its intercept (where the line crosses the y axis when x is 0) to calculate y. In this case, if we extended the line to the left we'd find that when x is 0, y is around 20, and the slope of the line is such that for each unit of x you move along to the right, y increases by around 1.7. Our f function therefore can be calculated as 20 + 1.7x.

Now that we've defined our predictive function, we can use it to predict labels for the validation data we held back and compare the predicted values (which we typically indicate with the symbol ŷ, or "y-hat") with the actual known y values.

Let's see how the y and ŷ values compare in a plot: 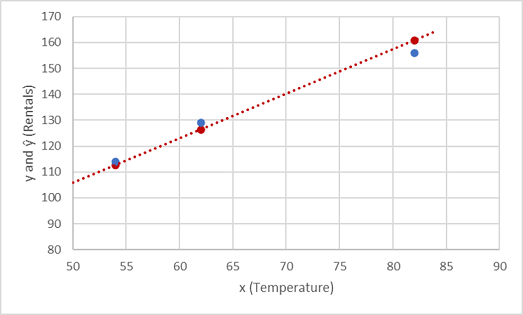 There are various ways we can measure the variance between the predicted and actual values, and we can use these metrics to evaluate how well the model predicts.

One of the most common ways to measure the loss is to square the individual residuals, sum the squares, and calculate the mean. Squaring the residuals has the effect of basing the calculation on absolute values (ignoring whether the difference is negative or positive) and giving more weight to larger differences. This metric is called the Mean Squared Error.

For our validation data, the calculation looks like this:

We do know that the lower the value is, the less loss there is in the model and therefore, the better it is predicting. This makes it a useful metric to compare two models and find the one that performs best.

Sometimes, it's more useful to express the loss in the same unit of measurement as the predicted label value itself - in this case, the number of rentals. It's possible to do this by calculating the square root of the MSE, which produces a metric known, unsurprisingly, as the Root Mean Squared Error (RMSE).

So our model's RMSE indicates that the loss is just over 3, which you can interpret loosely as meaning that on average, incorrect predictions are wrong by around 3 rentals.

Many other metrics can be used to measure loss in a regression. For example, R2 (R-Squared) (sometimes known as the coefficient of determination) is the correlation between x and y squared. This produces a value between 0 and 1 that measures the amount of variance that can be explained by the model. Generally, the closer this value is to 1, the better the model predicts.

Jupyter Notebook 101: Everything You Need To Know

How to use Serverless Lamba Function with Appsync and DynamoDB