I've been a geek and the 'computer guy' of the family for pretty much my whole life. Everyone thought I'm going to study Computer Science, Engineering, Robotics or something similar, but that never happened. Throughout my late teens and early 20s, a mix of bad decisions and life kicking me in the butt has successfully kept me in dead-end low paying jobs.

I caught a break when I started working for an online store. I began as an intern but rose up in the ranks quickly to become a sales executive responsible for a solid chunk of change. It's a relatively small company, so I get to influence product design, liaison with manufacturers from China, acquire new international clients and oversee general sales strategy for my products.

Unlike in my previous jobs, I don't have a set of responsibilities assigned for every waking minute of my workday. I get to assign my own goals and work at my own pace. Quite quickly I noticed how inefficient our office runs, and how massive the tech debt has gotten at this point. I started doing some Java tutorials during my work hours and not long after I parsed CSVs and built data visualizations like there was no tomorrow. That was a little over two years ago. Since then I expanded and used my newfound coding skills countless of times and by now saved hundreds of manhours.

Over time, as my tasks at work have become more repetitive. I love discovering new things and reaching my goals, but hardly anything new ever happens here. It must have been about a year ago that I've decided to shape up my coding skills and go through with a career change.

Without a shadow of a doubt, I have greatly improved since then. I touched on just about every buzzword out there and I can hold my own in a tech conversation, yet I still didn't apply for a single position. My cushy job is holding me back. I live in a small town and I'd likely have to relocate for any tech job. I don't particularly mind moving. At the same time though, the prospect of having to move and the fact that it would be a while until I'd get equal or larger salary than that of my sales exec job has successfully dissuaded me from trying to apply.

What if I'm not good enough? Maybe if I just learn one more library or a framework it will be enough. The impostor syndrome was real. That's when I read some stories from dev.to community and watched youtube videos about when one could get a first coding job and..

I should have applied a long time ago.

I think I'll hate myself If I'm still in sales in a few years. I love solving problems, discovering new things and I think quick on my feet. Anything mundane and commonplace bores me, it sucks the soul out of me. When I solve problems with coding sparks fly and unicorns gallop across the rainbow-filled sky.

Imo, this looks like a GitHub of a person who shouldn't be afraid to apply.

A few weeks ago I took part in a Ludum Dare game jam, and I have gotten a lot of great feedback. What I lacked in skill, I made up for with cheap humour and it turned out a lot better than I could have imagined. I made a Ludum Dare Simulator, a card game about people making games for the LD gamejam. So. Meta. 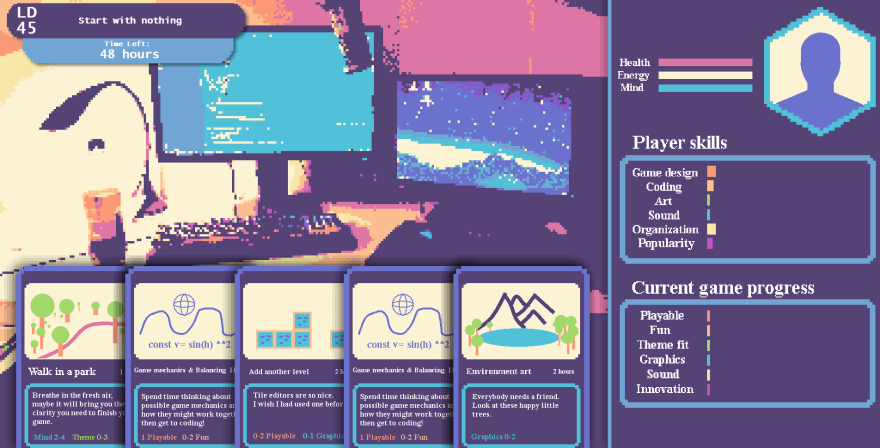 What I lacked in skill, I made up for with cheap humour.

Writing code for myself and never showing it to the world was a mistake.

I'm oddly proud of this one. Don't open if you're an orc right activist. Why is it cool? Pixi.js webgl renderer, orc bodies splinter dynamically based on where the arrow hits them, arrow & orc physics with matter.js, custom blood emitter. It's not hosted anywhere right now, I broke it a little but it's high on my TODO list.

My GitHub is a mess and I don't have a working portfolio as of yet, but I decided to get it all sorted out throughout this year's holiday season and start applying right after new years.

I plan to share my experience, post tutorials and stuff about cool things I encounter on my journey.

Next stop - portfolio to show off my skills. 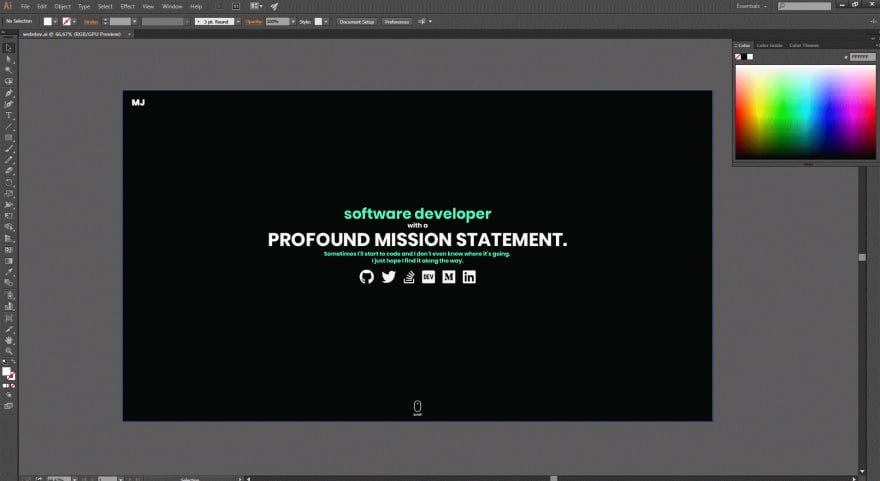 Methods can be passed around like normal functions... you didn't knew that.. did you?😎