TLDR; This article is about learning what Gatsby is and what problems it solves.

At the beginning of the web it was all about documents and hyperlinks leading to other documents. We created these documents with the markup language HTML.
Soon we got other things to enhance the experience namely CSS and JavaScript. Sites, in the beginning, were all static, files that one created and part of our site would never change. Then came AJAX and the ability to ask for content as part of user interaction or some other reason and the page could suddenly change from underneath us. The next revolution came with the arrival of SPA applications. SPA or Single Page Applications gave us the ability to create apps that would stay in one place. It would mimic having multiple pages through the use of JavaScript. Now we got web pages, that didn't make our pages flicker every time we navigated to a new page. In fact, we got apps that are fast and snappy just like client apps. All this speed comes at a price though.

These SPA applications came with some problems namely:

This brings us to the present day where different innovations have been made to try to fix the above issues. To fix discoverability, different pre-rendering techniques have been invented to ensure our dynamic pages would exist when a web crawler came knockin. Another approach is using Static site generators. Static site generators are applications helping you author static content like HTML, CSS, and JavaScript. They have been around since the beginning of the web to make authoring documents a faster and more streamlined process. They have recently experienced an upswing in popularity, which brings us to Gatsby...

The What and Why of Gatsby

A static site generation tool today needs to be handle not only content existing in different formats such as XML, JSON, YAML, and more but also that content might need to be fetched from an endpoint for example. A tool like that needs to support a lot of file formats and ways of fetching content out of the box. Or it needs to be built in a way so that it can easily be extended to support the ever-changing landscape that is the Web and new file formats. Gatsby is both, it's able to support a lot of formats out of the box and fetching data using Web Requests. It also comes with a competent plugin system that enables you to easily add more functionality. Plugins can either be downloaded as modules you can author yourself and add them directly to your Gatsby project.

What you author in Gatsby are components. When the components are put through a build process they turn into static HTML files. Gatsby's model consists of authoring components and pair them with content from a built-in data graph. How do we do that? Well, there are some core technologies that help us do just that namely:

So how do you get started with Gatsby? You should have some things downloaded first like:

To create a Gatsby project type the following in a terminal:

Replace <project name> with an arbitrary name that you choose.

Now you should have a Gatsby project created.

Type the following to start up the development server and see your Gatsby project: 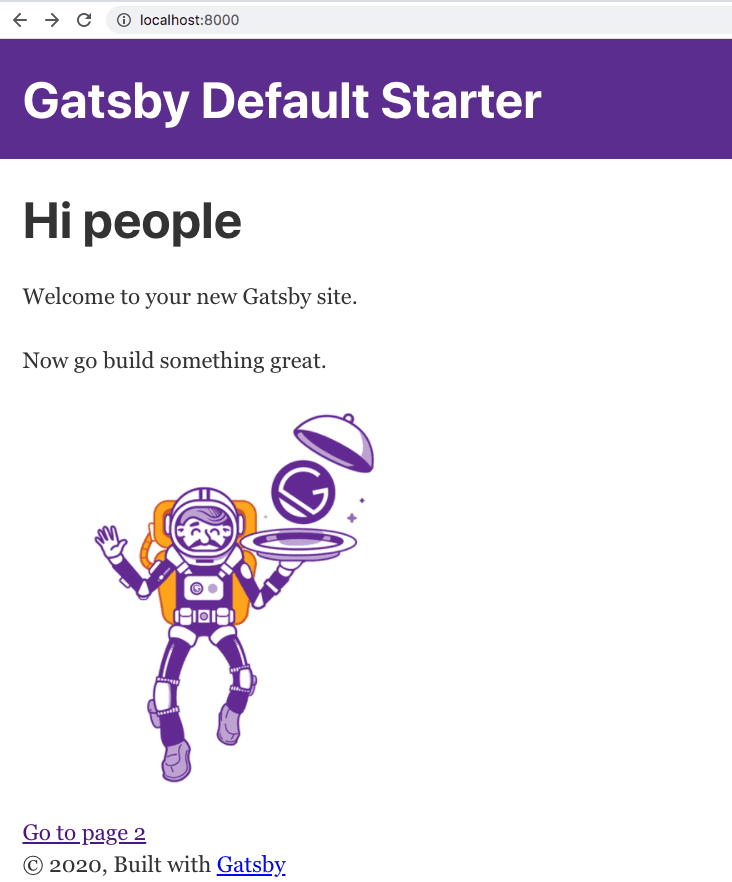 Next, we want to visit the in-memory data graph. Type the following address in your browser:

Create a page with data

Now that we have a working Gatsby app up and running let's learn how to add some data to it. For this we will do two things:

In the directory src/pages, create a file about.js. Give it the following content:

Startup your development server with this command:

Change the URL of your browser to http://localhost:8000/about, you should see the following being rendered:

Next, we will learn to use the built-in graph. Change your browser address to http://localhost:8000/___graphql. On your left drill down into the elements until you have the following selected:

In the middle section, you should now have the following query created for you.

Make a note of it by copying it to the clipboard.

Return to your about.js file and replace its content with the following:

The code above does the following. The query from the visual environment ended up at the bottom of the page. Then a new input parameter data was introduced to the component. data is assumed to contain the result of the query and the result is laid out in the markup part of the component. What happens here is that during build-time Gatsby will execute the query against the tree and input the result into your component.

One of the most powerful things about Gatsby lies in its ability to use plugins to extend its capabilities even further. For this demo you will learn how to:

Create the directory data under the src/ folder. In the data/ directory create the file products.json and give it the following content:

There are two things we always need to do when it comes to our content and getting it into the built-in graph.:

Open up gatsby-config.js and in the plugins array add this entry:

The above instruction is told to source the following directory ${__dirname}/src/data as instructed by setting the path property. This means our data/ directory where the JSON files live.

All we need to do to configure this plugin is to ensure it's mentioned by name so Gatsby knows to invoke it. Add the following as an entry to the plugins array in gatsby-config.js:

The configuration in gatsby-config.js should now look like this:

Run the app with the command:

In your browser navigate to http://localhost:8000/___graphql. Note how the JSON data has been sourced from the JSON file and put in the built-in graph:

Drill down into the tree and select out properties. The constructed query should now look like the following:

Make a note of the query by copying it to the clipboard.

Now create a file products.js under the pages/ directory and give it the following content.

Above we are adding the query we just made a note of. In the component we are laying out the response from the query like so:

and it renders like so in the browser at http://localhost:8000/products:

In summary, you were taught some background on the history of the web and how static generators came about. You also learned how Gatsby addresses some problems with modern web development. Finally, you learned how to create and run a Gatsby app and also how to add different types of data to your app.

How to Build a Responsive Dashboard Application in Angular