A weekly blog series where I discuss and share my journey with IBM Cloud Services. In this THINK tutorial, we will demonstrate:

What is the IBM Cloud Container Registry?

In the case that you don't have the above CLIs installed, I would recommend navigating to the links and following the respective Getting Started guides.

Building an image for a NodeJS app using a Dockerfile

I have created a simple NodeJS App that generates random facts about cats. We are using the Cat Facts API to generate the facts. Simply, clone this repo and follow along:

The following files are needed to run the app in a container:

[1] Create a Docker File.
Add a new file at the root of the project and call it Dockerfile 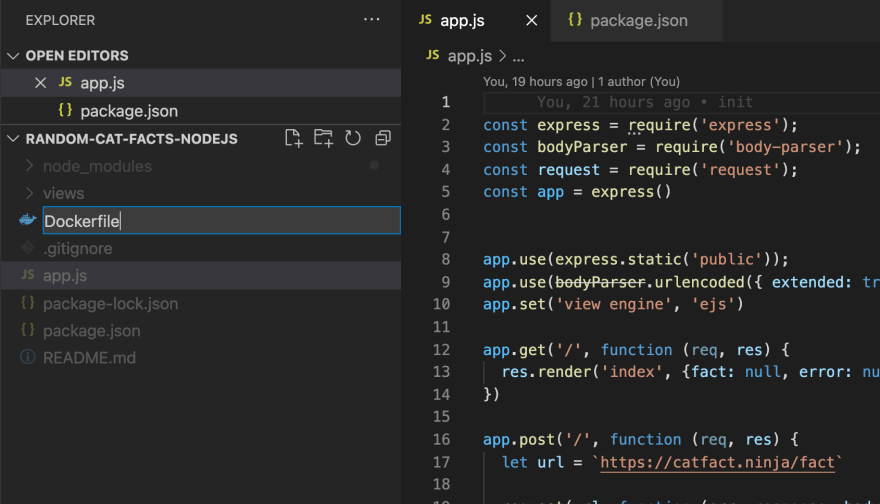 [3] Add the app.js and package.json files as part of the docker build instructions.

[4] Add instructions to executing the app on Docker. We will first use the RUN command to install all packages in package.json that is needed for the app. Then we will use the EXPOSE command to point to the port that app will be listening on.

[5] Finally, add instruction to run the app when we spin up a Docker image

Run the following command to build the docker image:

Verify that image was built. List images to see your image tagged random-cat-facts:v1

Just like that we have built an image for our NodeJS App!

Running an image as a container using Docker

Now that we have successfully built an image, let's run it in a Docker container.

This step is pretty straightforward, simply write a docker run command pointing the image to the port the app will be listening on:

Once we have done this, I have inserted a console.log() statement that this step was successful and the app is ready to running in a Docker Container

Open up a second terminal and use the curl command to ping the application.

In this demo app, I have built in a /test endpoint to test our application and as expected pinging our app does display a random cat fact.

After building and running the image, we are now ready to deploy the image onto an IBM Cloud Container Registry.

The result should look something like the following where you are pointed to the respective api and region:

[2] Log your local Docker daemon into IBM Cloud Container Registry so that you can push to and pull from the registry.

[4]Tag your image so that it can be pushed to IBM Cloud Container Registry.

[6] Verify that the image was successfully pushed by listing images in Container Registry.

Oila! You have successfully built a Docker Image for a NodeJS app and deployed it onto an IBM Cloud Container Registry.

Thank you for following along this THINK Day's Tutorial and be sure to look out for my next post, where I will continue sharing my Journey with IBM Cloud Services!!!