We’ve heard about so many cloud models over the past decade, and we have learned to use them efficiently. Around 7/10 organizations have adopted cloud technologies, especially during the pandemic to support different types of workloads, and utilized hybrid cloud and multi-cloud deployment models, but what is lacking is the consistency between environments.

Let’s talk about some of the issues that organizations face when adopting public cloud technologies. Firstly, data residency, organizations want to keep the data within the country or at least on-premises to ensure that the data falls under the right data regulations per the country they are operating in. Secondly, latency, real-time workloads require low latency connections that would allow them to process the data, and the workloads have to be closer to the data itself, a primary example here would be running applications on the edge. Irrespective of these issues, other issues need focus, such as the inability to instantly customize environments and applications, and the lack of visibility, management, and agility.

So, what is distributed cloud? How is it going to transform the world of cloud computing?

As you have heard about distributed computing, where applications are scaled across different computers networks together to improve performance and overall efficiency.

Similarly, the distributed cloud has a similar aspect, it is a public cloud computing service that allows you to run public cloud infrastructure in multiple and different locations, may that be your own data center, but even on your cloud provider's infrastructure. The idea here is to expand public cloud services to various locations, allowing you to manage everything from a single control plane.

As distributed cloud services can run on your infrastructure, it also allows you to run cloud applications on the edge, as Gartner stated that by 2025, they predict that 75% of enterprise-generated data will be created and processed outside the traditional data center or cloud.

Moreover, it also helps you overcome the issues highlighted earlier regarding latency and data residency including the inability to instantly customize environments and applications, and the lack of visibility, management, and agility. As a result, distributed cloud resolves the operational and management inconsistencies that occur in hybrid cloud and multi-cloud environments.

Once again, in simple terms, the distributed cloud is you extending public cloud services into your infrastructure or on top of your existing cloud provider’s infrastructure.

You can also check out this really interesting video talking all about distributed cloud!

How does distributed cloud work from a responsibility point of view?

As you are aware by now, that distributed cloud leaps into providing a public cloud provider’s services and computing stack to wherever a customer might need it, may that be on-premises or off-premises in one or more public cloud data centers that may or may not belong to the cloud provider and even on the edge.

The cloud provider takes responsibility for the operations, updates, governance, security, and reliability of the distributed infrastructure. The customer focuses on their infrastructure, where the public cloud services are being extended, which may be virtual machines, disaster recovery, hypervisors, and much more, in other words, when we are talking about distributed cloud, we are looking towards a shared responsibility model.

So, what does IBM provide when it comes to distributed cloud services?

IBM Cloud Satellite helps you deploy and run applications across all on-premises, edge computing, and public cloud environments from any cloud vendor. It standardizes a core set of Kubernetes, data, AI, and security services to be centrally managed as a service by IBM Cloud, with full visibility across all environments through a single pane of glass. The result is greater developer productivity and development velocity. 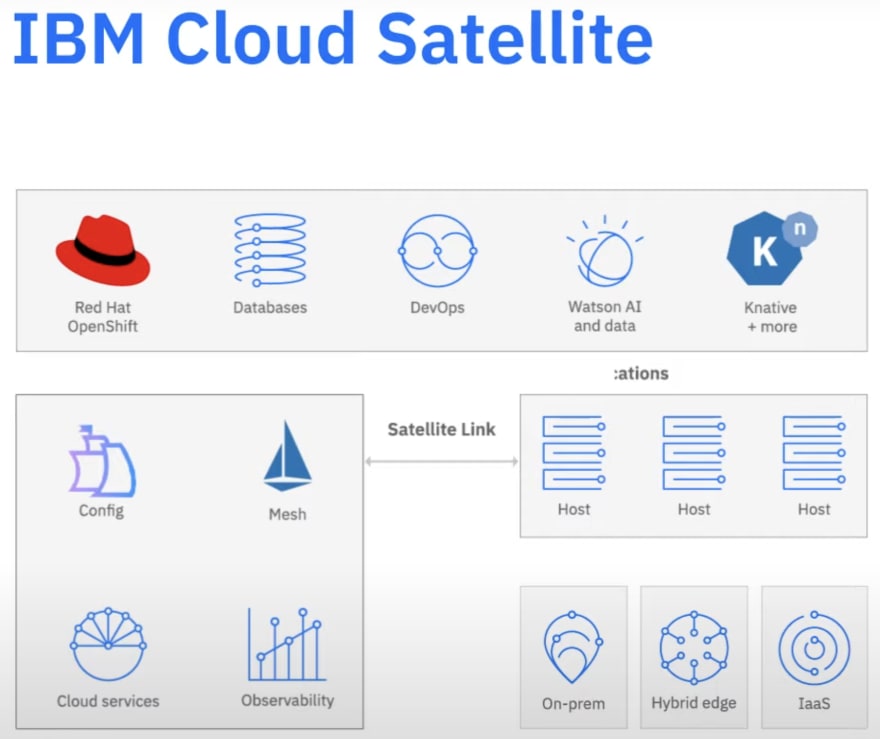 Check out this cool video about an introduction to IBM Cloud Satellite!

And check out these cool use cases explaining how IBM Cloud Satellite fit into your environment!

Want to talk more about distributed cloud use cases and other IBM Cloud services?

You can reach out to me on LinkedIn & Twitter

Once unpublished, this post will become invisible to the public and only accessible to Fawaz Siddiqi.

Thanks for keeping DEV Community 👩‍💻👨‍💻 safe. Here is what you can do to flag ibmdeveloper: