Today we're going to stop react for a little and create a quick simple Express server to serve our files.

The purpose of this is to serve our file manager only so we won't go deeper.

Express for those who are not familiar with it, is a simple Node.js framework that helps you create a server easily.

Let's create a new directory beside our react directory and name it server and rename our React js project to be client so we can easily distinguish between them.

We're not going deeply into express installation, you can read the official documentation for that.

Faker to generate our fake data and @mongez/fs to help us with our file system.

We need to create two directories, src that will manage our server and generator and data to store files and directories inside it.

process.cwd() is the current working directory, which we can call it our root directory, so we're going to create our data directory inside it.

Here we simply imported our @mongez/fs package and faker to generate our fake data.

dataDirectory is the directory where we're going to store our files and directories.

We created a function called start and called it at the end of the file.

Here we created two functions, the first one is makeFiles and the second one is make.

In make function we'll store the directories that we created in an array called directoriesList and we'll loop through it until we reach the number of directories we want to create.

Only directories that are really does not exist will count and stored in the directoriesList array.

Then we'll call makeFiles function to create files inside the directory.

This command will make recursive directories and files, but you'll need to stop the script after some time and run it again.

But we'll not use start script for now, we'll use it later.

After running and stopping the command multiple times, we'll have a directory called data that contains directories and files. 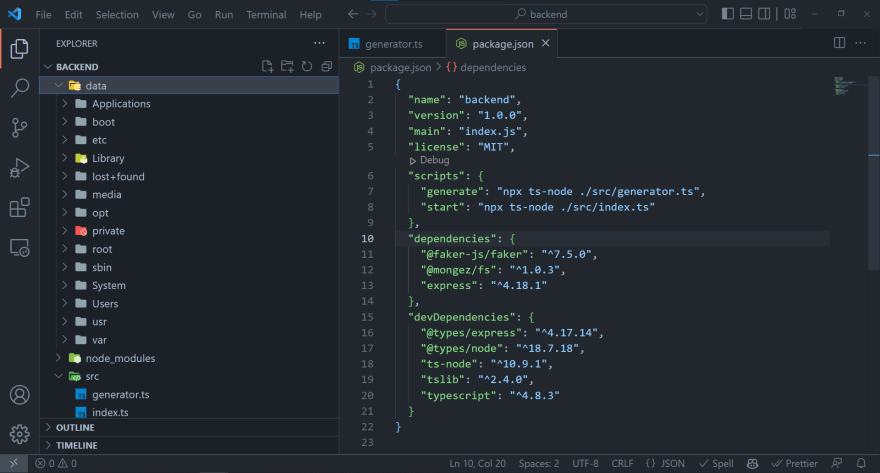 Now let's make a simple server so we can send requests over it, create src/index.ts file and let's import express.

The code is very simple, we created an express server and defined a route handler for the default home page which will display Welcome to File Manager.

You should see in the terminal ⚡️[server]: Server is running at http://localhost:${port}

Now open the browser and navigate to http://localhost:8001 and you should see Welcome to File Manager in the browser.

In the next chapter

You can see chapter files in Github Repository

Don't forget the main branch has the latest updated code.

Tell me where you are now

If you're following up with me this series, tell me where are you now and what you're struggling with, i'll try to help you as much as i can.

Once suspended, hassanzohdy will not be able to comment or publish posts until their suspension is removed.

Once unsuspended, hassanzohdy will be able to comment and publish posts again.

Once unpublished, all posts by hassanzohdy will become hidden and only accessible to themselves.

If hassanzohdy is not suspended, they can still re-publish their posts from their dashboard.

Once unpublished, this post will become invisible to the public and only accessible to Hasan Zohdy.

Thanks for keeping DEV Community 👩‍💻👨‍💻 safe. Here is what you can do to flag hassanzohdy:

Unflagging hassanzohdy will restore default visibility to their posts.