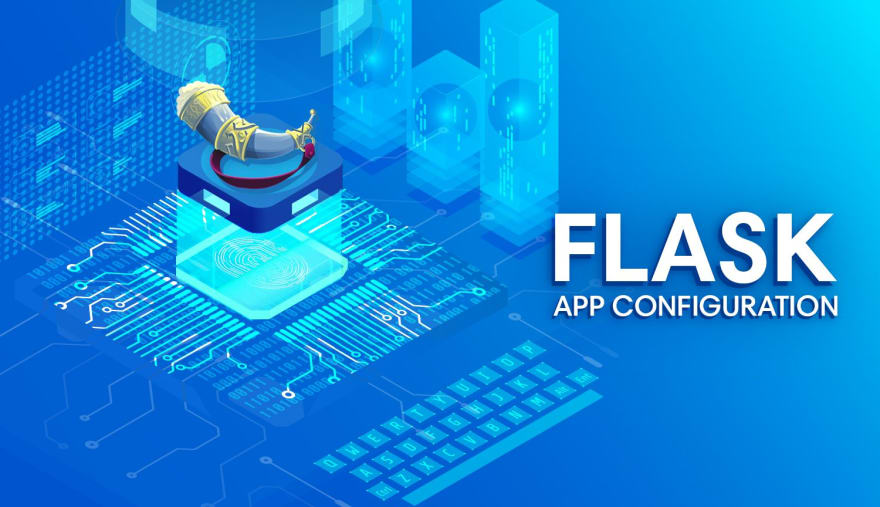 The software industry has seen no shortage of new web frameworks over the years, but I certainly wouldn't be alone in saying that none. Discovering Flask is to rediscover instant gratification itself: all it takes is a mere few seconds for anybody to deploy a Python application, alive and well on a development server. I believe the cliche that the hardest part of anything is getting started, so it's no surprise that Flaks can get the imagination brewing.

Configuring apps isn't the sexiest topic to cover in the realm of hot new frameworks, which is precisely why most newcomers skip over this aspect of Flask development entirely. This level of short-term procrastination seems harmless to the untrained eye. From my perspective, it's like watching a generation of grown professionals postponing their child's potty-training by one more day: both cases ultimately end with grown adults shitting their pants.

Every web app needs to be configured with things like database URIs and secret keys to enable critical functionality. Unlike Django, there's no monolithic settings.py file in Flask (thank god). Instead, we can choose to configure Flask via several methods. Today we're covering two topics in Flask configuration: best practices in configuration structure and configuration settings themselves.

What Not To Do: Inline Configuration

The fastest, dirtiest, and most dangerous method for configuring Flask is by directly setting config vars in source code using plain text. Amongst tutorials, it also seems to be the most common. Stop me if you've seen something like this before:

From the perspective of an author writing tutorials for strangers, it's convenient to pretend that setting config values this way is acceptable. Surely nobody who is clicking into "How To Do This Sensational Thing in Flask" tutorials care to learn best software development practices, which encourages a lot of bad behavior and leaves many questions unanswered. For instance, why would we wait until after we create the Flask app object to set something as important as FLASK_ENV? Isn't the point of configuration to inform our app on how to function before it starts... functioning?

As the Flask docs promise, your app's config can be modified as we did above and can be modified/changed at any time. Let's set aside the horrendous readability this creates down the line. We'll even turn a blind eye to the unimaginable shit show we create by mutating configs while our app is running. To make matters worse, it encourages committing sensitive values such as secret keys in the middle of your codebase:

We could update these settings in bulk instead, which is a slightly prettier way of executing the same horrible configuration pattern:

Config variables belong in config files for a reason. They're an organized set of instructions that are defined before our app is live. Moreover, it's much easier to avoid compromising sensitive secrets such as AWS or database credentials when we manage these things in one place. Let's explore our better options.

Configuration from a .py File

The simplest way to configure a Flask app is by setting configuration variables directly in a config file such as config.py.

This allows us to avoid the mess in the previous example by isolating our configuration to a file separate from our app logic:

Flask immediately recognizes these variables as being Flask-specific and implements them without any further effort. This is a big win in terms of organization, but we still haven't solved the issue of exposing stuff like SECRET_KEY in a file that might make its way onto a public Github repo by accident someday. A standard solution is to pull these values from environment variables.

SECRET_KEY will exist as long as you keep your terminal open. You can retrieve variables like these on your local machine like so:

It would be annoying to set these variables every time we open our terminal, so we can set environment variables in a local file called .env instead and grab those variables using a Python library like python-dotenv:

Our app is now both significantly cleaner and more secure as long as sensitive values live in .env :

We can take our configuration a step further by setting different configuration values depending on which environment we're running in (production, development, etc). We accomplish this by splitting configurations into Python classes in config.py :

Instead of a one-size-fits-all config, we can now swap configurations based on which environment Flask is running in. ProdConfig and DevConfig contain values specific to production and development respectively. Both of these classes extend a base class Config which contains values intended to be shared by both. Swapping between configs is now this easy:

Now, what do all these variables mean anyway? We've polished our app to have a beautiful config setup, but what do SECRET_KEY or SESSION_COOKIE_NAME even mean anyway? We won't go down the rabbit hole of exploring every obscure setting in Flask, but I'll give you a crash course on the good parts:

Configuration for serving static assets via the Flask-Assets library:

Flask-SQLAlchemy is pretty much the choice for handling database connections in Flask:

Flask-Session is excellent for apps that store user information per session. While Flask supports storing data in cookies by default, Flask-Session builds on this by adding functionality and additional methods for where to store session information:

We've spent way more time on the topic of configuring Flask than anybody could enjoy. Instead of making a dry technical post longer, why not learn from example by cruising our collection of countless Flask tutorials? We've pumped out at least a dozen Flask projects - feel free to find an example Flask project that meets your needs and take it from there.

Getting started with Pipenv

From Frontend to Python and Flutter