For years now I have been reading and hearing the term Wearable computing everywhere. "Wow look at this super cool whatever that you can wear and changes shape", "take a look this fashion week's new bliking garments"... After a couple of examples it seemed that the only thing you could do in this field was attaching very basic (mostly quite ugly as well) interaction - visualization interfaces on a piece of fabric. But, oh, I realized last week I have been living in dark ignorance on this subject for a very long time.

I was curious to see if there exist any Augmented Reality solutions that let people see waves and wireless signals. So, I went and asked Lord Google and I here I am trying to understand this instructables post that teaches you how to build a Sequential Wave Imprinting Machine S.W.I.M., a machine that let's you see the radio or sound waves being emmitted around you using a self built electric circuit and the aid of a photocamera. With this he invented the term Metaveillance, using Sousveillance (looking from below, the user) to monitor the devices that monitor us (Surveillance), thus empowering the individual who doesn't know when he is being captured by cameras around him. 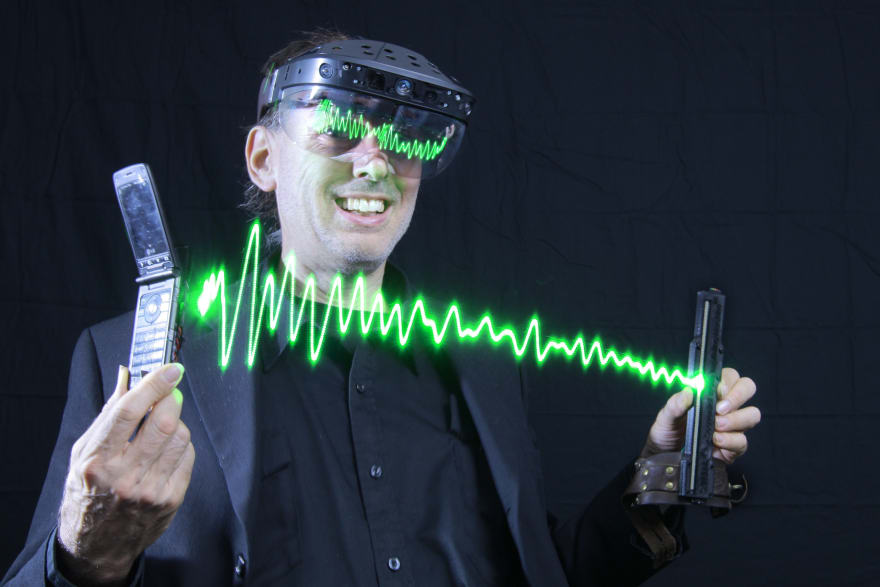 I was curious to see who is the person responsible for such a crazy project, developed in the 70s!!! and I actually find out he is considered the father of wearable computing. A true pioneer. He was considered a lunatic and he ended up inventing an academic field. How about that!!

He has worked on many projects that question the agency of individuals in front of corporations and government in an increasingly interconnected world. All his work is very remarkable, but the ones that stroke me the most is his series of performaces WearCam. They are variations on the same theme, empowering otherwise passive subjects of observation by reverting the act of surveillance back to the observer through technology, or put in other words, giving superpowers to the user. 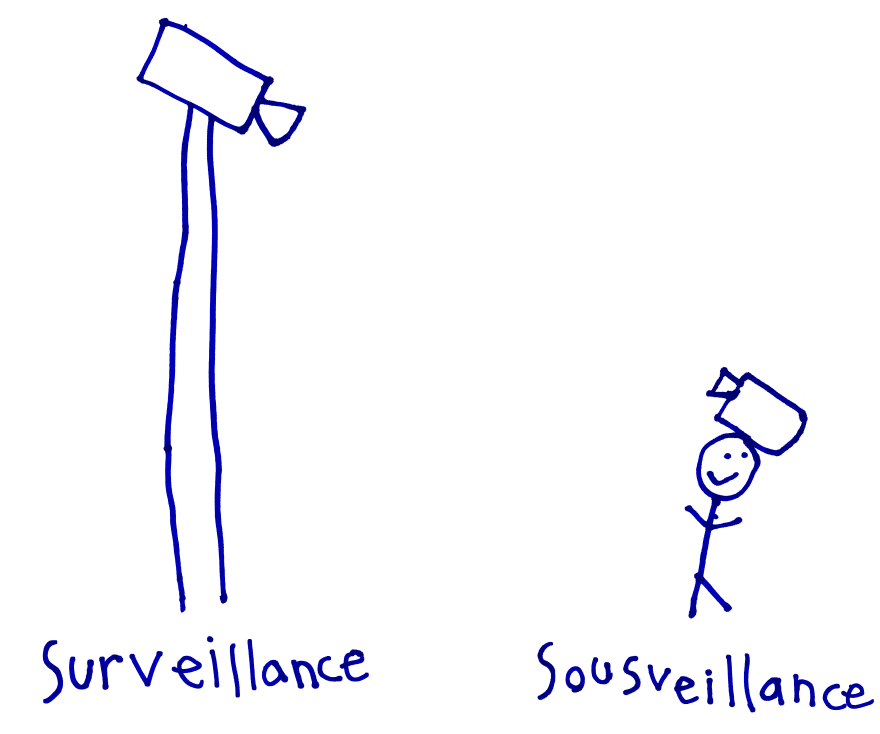 A cute explanatory drawing made by his daughter.

A particularly funny part of the experiment is the idea that sousveillance make clerks into humans again: if you go to a shop, let's say, and you ask a person working there why you are being filmed by the security cameras, he "will absolve himself from the responsibility for the situation by making reference to the MANAGER. (...) Similarly, the MANAGER is bound by, or can pretend to be bound by, conditions from a chief executive officer (CEO)" and so on. Thus making it very difficult to address the problem at a specific person because they would always take responsibility off their shoulders. 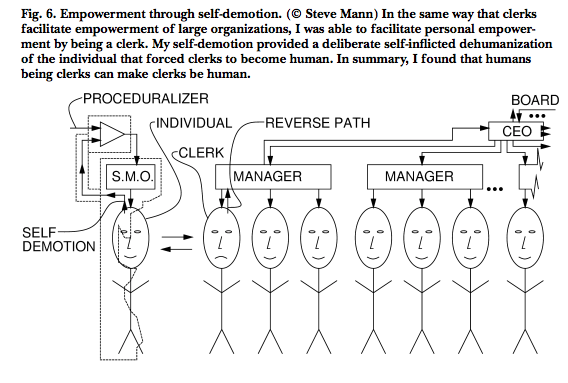 Now comes the funny part, in a situation like this, complaining to the MANAGER, then the CEO, would require maybe writing a letter and waiting and maybe never getting a response, but if you take photographs or video of the CLERK, he will immediately call his supervisor, and if this escalates, the person that is a step up in the hierarchy will be called. Thus these experiments created a bridge between the subject of surveillance and the people who could be responsible of surveillance. (If you didn't understand my attempt to explain this, please read the article ). 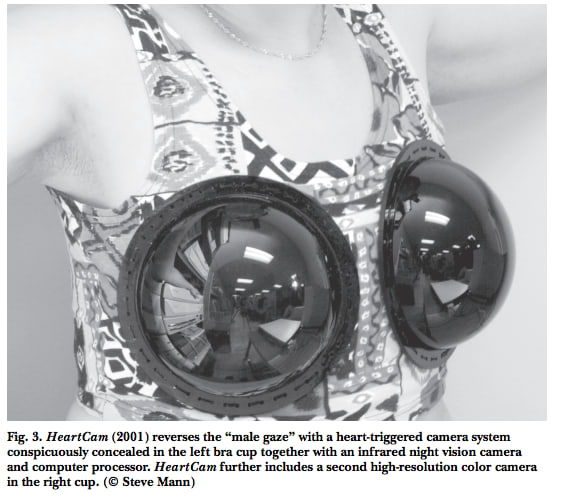 This device takes pictures if the heart beats faster, using the heart rate "as a natural index of frame rate (...) Moreover, if an assailant objected to the camera, or the possibility of a camera, by assailing the wearer, whether verbally or otherwise, the frame rate would increase. [...] Since this feedback loop was beyond her control, it could be said that the assailant was taking pictures of himself by agitating her."

You can see more of this series at Wearcam.org.

All this takes me back to my first thoughts, which is that sewing a piece of digital technology onto cloth can be called a wearable if you like, but it is ultimately the meaning it creates which makes it valuable. So, thanks Steve Mann, I am sold and deep into Wearables now. Going back to the origins is always necessary to understand a technology.

I strongly encourage you to read more about his work if you are interested in surveillance and wearable technology. You can start by watching this video: 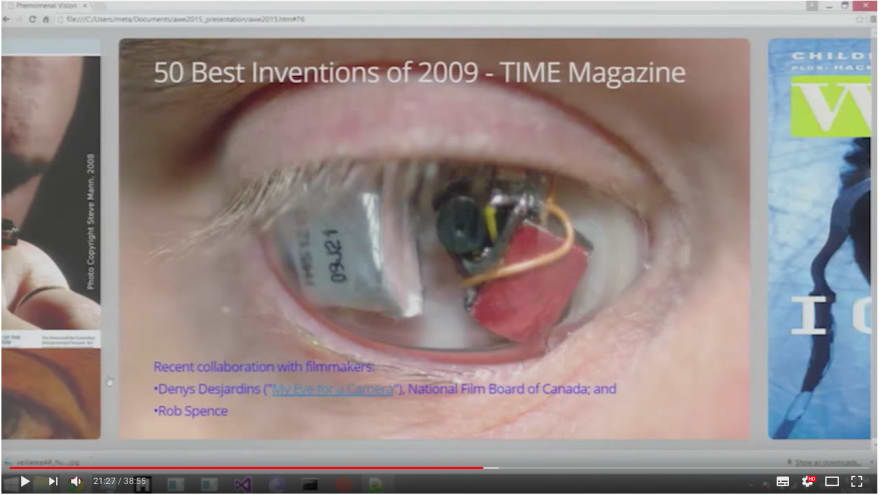 and reading this article. Existential Technology: Wearable
Computing Is Not the Real Issue!

(Failed attemped) How to get Maixduino connected to AWS IoT

What is edge computing, why do it, why send IoT data to the cloud?