The goal of this series of articles is to introduce the features and explain the functionality of the Helm Universal Layer Library - in short HULL. It is a Helm library chart which can help in efficiently creating and managing applications in Kubernetes. The HULL project is open source and you can find it on GitHub:

This repository contains the HULL Helm library chart. It is designed to ease building, maintaining and configuring Kubernetes objects in Helm charts and can be added to any Helm chart as an addon to enhance functionality without any risk of breaking existing Helm chart configurations.

The chart itself and all documentation related to it can be found in the hull folder which is the root folder of the HULL library helm chart.

The Kubernetes API JSON Schemas are stored in the kubernetes-json-schema folder.

If you are unfamiliar with the terms Helm and Kubernetes a brief introduction will follow. However if you have no experience with Kubernetes and Helm it is recommended to study and get practical experience first before proceeding with the tutorials because some familarity with the concepts is required to follow the article(s).

Kubernetes is the defacto standard in modern application deployment and management, especially in the cloud. Helm is a wide-spread tool for packaging and managing Kubernetes applications in form of so-called Helm Charts. Helm supports the concept of 'Library' charts which in itself do not contain deployable objects but only helper funcions to foster Helm chart creation and configuration. HULL falls into this category and can be thought of as an extension or plugin to Helm.

Before getting started with creating a real-life HULL based Helm chart step-by-step in the next articles of this series, some light shall be shed on the concept of HULL and how it affects the Helm Chart based workflow in this introduction. Feel free to skip to the next article in the series if you like to start more practically. Yet it is recommended read on to have an idea why you might want to use HULL (or why not).

Kubernetes objects are typically defined as YAML files and submitting these YAML files to the Kubernetes API (for example via kubectl commands) will create them as entities in the Kubernetes cluster. An application normally will consist of multiple objects such as Deployments, ConfigMaps, Ingresses and so on. Helm expects all the YAML files it needs to deploy to be created in the /templates folder of a Helm chart which is to be deployed.

The external source for controling the templating logic is in the first step the so-called values.yaml file which is contained in each Helm chart. It serves multiple purposes in reality:

For visualization consider some example mappings of a fictitious Helm chart with one deployment and a configmap in the /templates folder:

The following can be deduced from the example shown above:

The most positive aspects of the above outlined approach is full flexibility in defining what the mappings shall do. Hence it is possible to control aspects of:

Basically anything is possible but must be explicitly realized by writing the templating logic - even the most simple 1:1 projections. Each Helm chart has in that sense its own individual API which can be tailored towards the usage of the application.

While the Helm mapping flexibility shines when complex application configurations are required, it cannot on the other hand work without existance of explicit mappings. Considering that within a regular Helm chart typically a significant number of the implemented mappings are rather simple 1:1 mappings between values.yaml properties and single object fields involving no further logic, the Helm mapping approach adds a noticeable overhead to chart writing. For each mapping or projection, template files for the objects need to be created, the templating logic needs to be inserted correctly and the values.yaml needs to be updated to indicate the mappable property and the underlying logic needs to be documented.

As seen there is a significant amount of manual caretaking required when developing and maintaining a Helm chart this way. Consider a real life Helm chart having dozens of objects with hundreds of YAML lines where many mapped values in the templates may need configuring. Furthermore often configurable options on objects are left out initially because they are either not as relevant as others to the chart creator or out of laziness. If someone needs to configure such an option for his deployment scenario the chart needs to be adapted by either submitting a pull request, local forking or any other similar method.

From the perspective of someone who is proficient with Kubernetes it is often unnecessarily unclear how to achieve the desired Kubernetes object configuration without inspection of the mappings between values.yaml and the templates. In this sense, each Helm chart has its own unique API which requires analysis to understand the effects configuration changes in values.yaml have on the templates. The documentation of this interface, the values.yaml comments, often lack in explaining the effects that setting a specific property has on the generated templates. Meanwhile certain conventions have been established that can be found in multiple charts but there is no guarantee that an identical named property in values.yaml will have the same effect in different charts.

What is the difference when using HULL?

The HULL library Helm chart provides a single common interface to specifying Kubernetes objects within Helm Charts. The interface itself is based on the Kubernetes API schema itself which is integrated as a JSON schema in the HULL chart. Since all objects are defined directly in the values.yaml under the hull key there is no need to create and maintain custom template files when creating objects with HULL, everything happens in the values.yaml.

The following diagram sketches how the myapp Helm chart would be built and processed when using HULL: 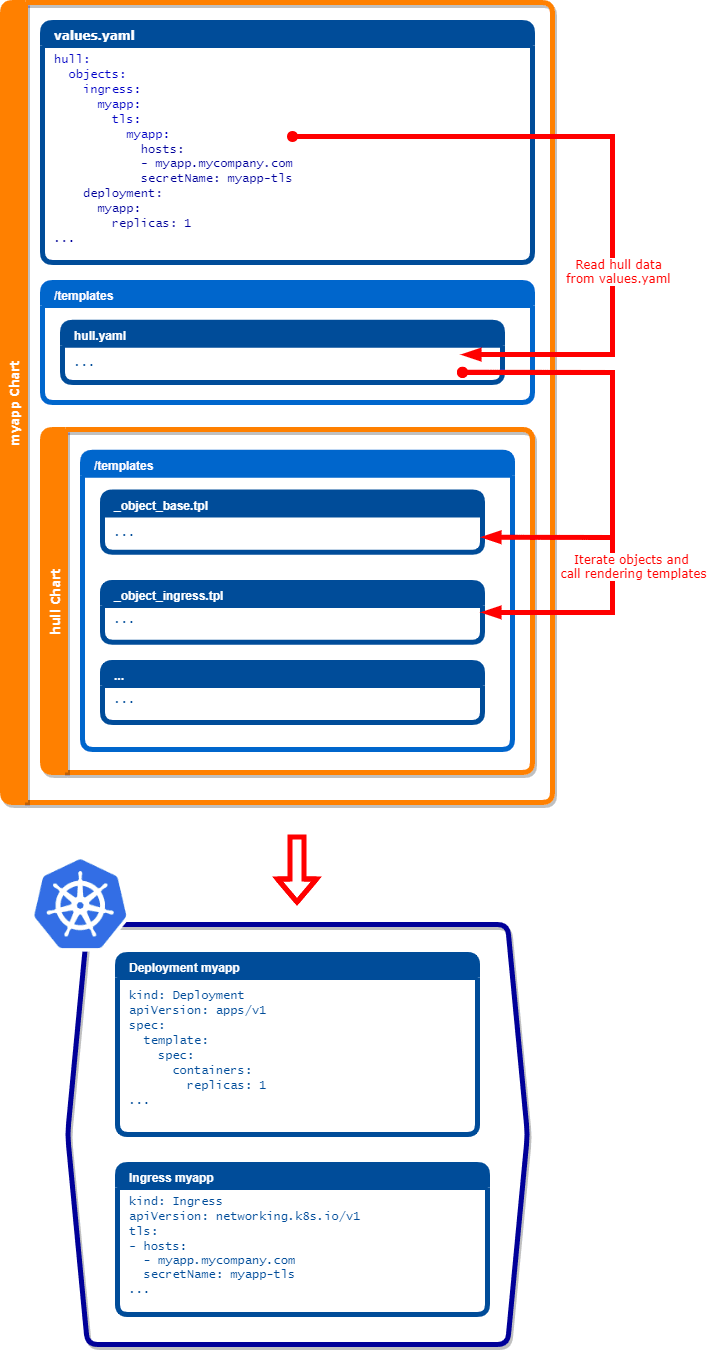 Being able to directly manipulate any object's property is advantageous in getting rid of the need for implementing explicit mappings, but it would alone not be sufficient to model more complex aspects such as the mentioned 1:n, n:1 or n:n mappings. To cater for this, HULL integrates a unique mechanism called HULL transformations to also allow integrating Go Templating expressions into the values.yaml itself without violating the constraint that the values.yaml file must be valid YAML.

This means you bascially have the same toolset available as with the regular Helm chart workflow but you can restrict yourself to only model configurational relations where it is useful or required. There is no need to model all exposed object properties explicitly, resulting in the amount of code to maintain within a Helm chart to be reduced drastically. Depending on application structure more than 50% of overall lines of configuration code can be saved when building a Helm chart with HULL.

So why would you want to choose using HULL?

The strengths of the HULL based approach are:

So whenever you either maintain many not overly complex Helm charts and want to have a fully flexible, maintanable, documented and common interface to all of them, HULL may be the right choice for you.

If on the other hand you manage a single or small number of Helm chart(s) for your company to be deployed to a limited number of environments you might not benefit as much from building charts around HULL though because the benefit pays of when you have to scale the chart creation process.

Thanks for reading and hoping this sparked your interest. If you'd like to please proceed with the tutorial on chart building with HULL where the popular kubernetes-dashboard Helm chart is being 'reinterpreted' using HULL to showcase its applicability to real life use cases!

What is Kubernetes HPA and How Can It Help You Save on the Cloud?

CLI vs API: What's the Difference?

gre9ory
Meme Monday 🦊
#jokes #discuss #watercooler
What was your win this week?
#discuss #weeklyretro
Reasons NOT to...
#devrel #leadership #discuss

Once suspended, gre9ory will not be able to comment or publish posts until their suspension is removed.

Once unsuspended, gre9ory will be able to comment and publish posts again.

Once unpublished, all posts by gre9ory will become hidden and only accessible to themselves.

If gre9ory is not suspended, they can still re-publish their posts from their dashboard.

Once unpublished, this post will become invisible to the public and only accessible to gre9ory.

Thanks for keeping DEV Community 👩‍💻👨‍💻 safe. Here is what you can do to flag gre9ory:

Unflagging gre9ory will restore default visibility to their posts.