We talked to Siddharth Kshetrapal, the maintainer of bundlesize and creator of react.games, who has recently joined Codesandbox

Siddharth Kshetrapal has always been passionate about design, CSS, and JavaScript. Sid also started the design systems team at Auth0, however, later he decided to concentrate on his side projects and became an indie developer. While being his own boss, he blogged at sid.st/blog, created react.games, and started a tinyreact.email newsletter. Recently, he decided to hop on a new adventure and joined Codesandbox. Sid gives a talk and teaches a workshop at React Advanced in London, Oct 23 & 25.

Hello Sid, and welcome to the interview with React Advanced! Please, introduce yourself.

Hi I’m Sid. I work at Codesandbox. I just joined them and I’m still figuring things out :)

Why did you decide to pursue a degree in Physics rather than Computer Science or Mathematics?

Story time! Thanks to my Dad, we had a computer at home when I was really young. I spent a lot of time making animations in Powerpoint 😋. To make my animations more interesting, I had to learn how to make graphics. I was lucky to find free and open source tools that I could explore my creativity with. Shoutout to Gimp!

When it was time for college, I didn’t think design was a real career choice and chose to study Physics instead (I used to be really into it back then). Ended up hating the theoretical parts of it and kept designing on the side. Graphic design led to Interface design and I bumped into the world of web development, discovered CSS and Javascript and never looked back.

Please describe your previous work experience prior to becoming an indie developer.

Along with Fernando, I started the design systems team at Auth0. The team eventually expanded to 4 people. We built out reusable components and design assets for the rest of the company to use. The component library part of it is open source, you can explore it here: auth0/cosmos.

I kept working on side projects at my time there. But, after 18 months, I really felt the urge to focus all my time on own projects. That's when I left my job at Auth0.

That said, I still recommend Auth0 to my friends, it's one of the best places I’ve worked at.

What hardships did you go through while being your own boss? What were the daily challenges you faced?

There’s a lot to dig in here. There were the predictable challenges of picking the right thing to work on, being productive, and finding your rhythm. Then there were challenges that hit me out of nowhere - like the anxiety of not making a consistent salary, dealing with self-doubt and facing my own lack of specific skills.

This sounds cheesy, but I think more than anything, I learned more about myself.

What has changed since then? Why did you decide seek full-time employment again?

A lot has changed since 😅 Most notably, the country I live in.

I learned a lot about making products, marketing them, and about my own skills during this short period. I still believe that it’s easier now than ever to work for yourself, but this just wasn't the right timing for me.

We are extremely privileged to work in an industry where it doesn’t feel like I’m giving up on anything at all. I'm joining Codesandbox at a really exciting team and I'm pretty excited about where we can take it.

I've moved to Amsterdam to work with the @codesandbox team 🎉

twitter.com/EedenOskar/sta…
Oskar van Eeden @EedenOskar
📣Very excited to announce @siddharthkp has joined @codesandbox as front-end dev! 🛩️He relocated from Bangalore, India and will be working from our new HQ in Amsterdam 🏙️. Also proud @christianalfoni signed with us to continue his work on state management 🔁. We are now 10 💪.

Can you briefly describe each of your side projects?

I try to teach everything I learn on my blog: sid.st/blog. I mostly write about React, Design Systems, and productivity.

I maintain a newsletter which sends top 3 React resources of the week in your inbox: tinyreact.email.

I also maintain bundlesize which is an open source tool to keep your JavaScript bundlesize in check.

Finally, I’ll plug react.games, which is a course where you learn React Hooks by building a game!

From all of the above-mentioned projects, which are you most proud of?

That’s a tough question to answer! I’m proud of different projects of mine for different reasons.

I’m really product of the React blog posts I’ve written, they summarize a lot of advanced concepts that I’ve learned over the years. The blog posts then became conference talks that were really fun.

The hooks course holds a special place in my heart because it was the first indie project I made and it gave me the confidence to stay in the game longer.

Finally, even though I feel a lot of guilt towards bundlesize (because I don’t spend enough time maintaining it), but I’m amazed it does more than 200k builds every month!

Bundlesize is the big one, last I checked it does over 200 thousand builds every month. Recently the Chrome Performance Fund invested in the project to help take it forward.

Other than that, I use open source as a platform to learn new things and experiment with them with a bunch of tiny projects. 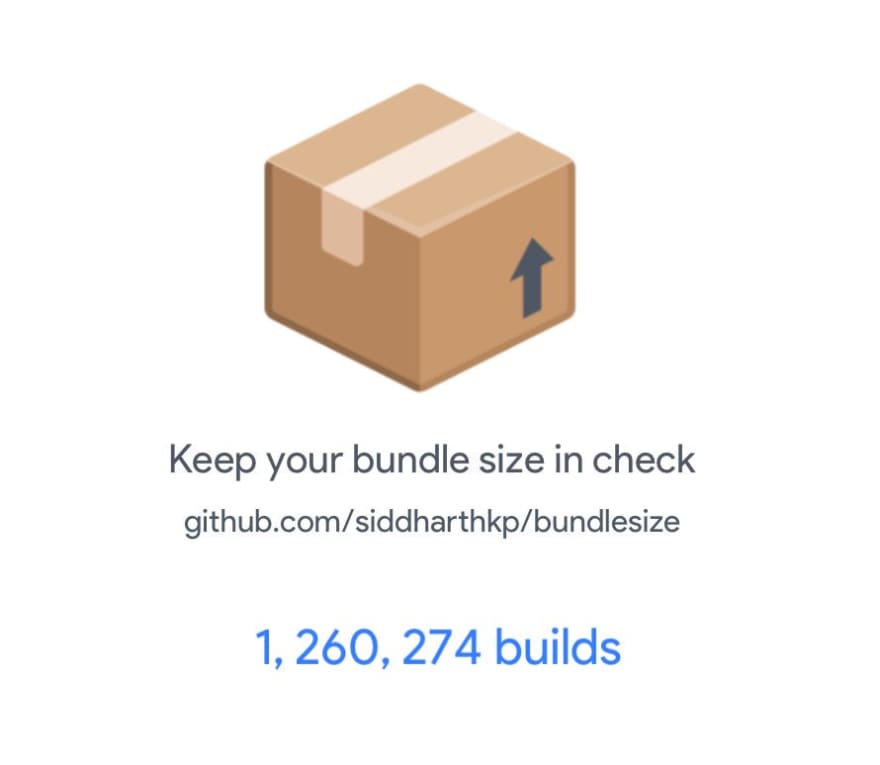 It's easy to get sad about open issues & unreviewed PRs, bundlesize brings a lot of guilt for me

I just saw it's helped folks keep their applications/libraries in check over a MILLION times! that's amazing!

Why do you think it’s important to support an Open Source community and help it grow?

I don't have a strong opinion on open source support. I do think developers should be paid for their time, but there are also many unsolved problems that is' not that simple. I think we have dug a whole so deep that it will take a few years to come out it. That's my loosely held opinion.

What’s your area of expertise at the moment?

React, Developer tooling and Design systems. I wouldn’t say I’m an expert at either of them, they are all massive ecosystems with areas where I’m completely clueless. But, it’s where I spend most of my time :)

My job at Codesandbox helps with that, I'm also working on some design systems tooling on the side that I'm excited to share at the conference.

Do you think React as a technology is deemed to supersede Vue and Angular? Or do you think these front-end solutions are going to combine?

React definitely has a massive community going for it. It's 2019, I want to believe we're past the framework wars and hope that the popular libraries continue to build on top of each other’s best ideas which gives us a great choice of tools.

What talks have you given in recent years?

Most of my recent talks have been about composition in React components or about design systems. I have a few more lined up.

My favorite talk is probably the last one I gave at React Amsterdam, the talk was about code smells in a React project and how to refactor them out. What made the talk really fun was that I was sharing my code editor on a giant screen and felt like pair programming with hundreds of people. 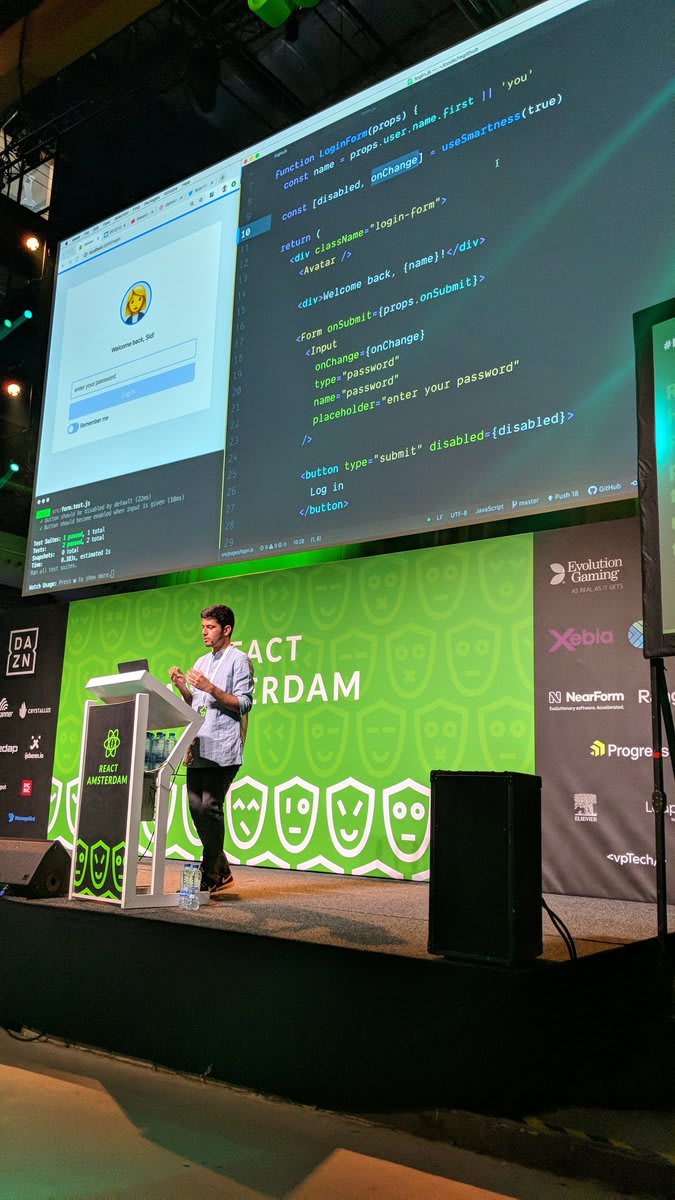 Do you have hobbies? What are they?

Outside of nerdy things, I play football and read books. I also enjoy skateboarding and surfing, but I’m not good at either of them 😅

Are you excited about the upcoming conference in London?

I’m really excited to meet my old friends in the community and make some new ones.

I’m giving a talk about the thinking model behind design systems which I’ve cheekily called Design Systems design. I hope I can inspire folks to steal some ideas from the design systems community that can benefit most UI projects.