Polyop, a London-based band formed in 2015, has developed its own unique and unprecedented visual-audio experience that fuses nature with the machine

Jack Driscoll and Alex Kempton, Polyop’s band members, leverage the power of JavaScript and WebGL to the new imaginary heights, blending technology with visionary prowess of fiction, folklore, and myth to create immersive textures and geometries that mimic the world we live in yet break, and they question the reality for the sake of discovering and entering the unknown. Polyop is going to do an audiovisual performance at React Day Berlin, December 6, 2019.

Hello, Polyop, and welcome to the interview for the upcoming conference React Day Berlin, organized by GitNation. Please, tell us about yourself. What background are you coming from?

Alex: As a kid I had a lot of fun making Flash animations of stick-men fighting each other. After spending hours labouring over these frame-by-frame pieces, I needed somewhere to put them all, so I had to learn how to make my own website. That eventually led to a career in front-end web development. It was only in 2014 that I actually started tinkering with the fun stuff, canvas and WebGL, which is how all of the Polyop visuals are made.

Jack: I started out DJing as a teen, and then learnt to make electronic music using software a little bit later. It was mostly making dance music to begin with, but I also hung around with some musicians who were in a post-punk band and they needed someone to play the keyboard. I have continued on that path since, performing and releasing music with various alias or bands.

I should also mention that there’s not just the two of us, Harry Orso and Finlay Macaulay joined us later as we started to expand the group for live performance, and they have been contributing to the music and ideas since. Also, Frank Holčík, an excellent electronic wind instrument player, will be joining us for the next string of shows too.

What do you do apart from playing music? Do you have day-time jobs or is music your only aspiration and means of existence?

Jack: I work part-time as a technician at a university helping out students with their projects in the sound studio. The rest of the days are spent co-managing our label Nudibranch Records, and doing audio mixing and production work for other producers.

Alex: As well as making visuals, I like drawing pictures (with or without the aid of my drawing robot), juggling, bouldering and looking for bugs. For money, I work as a freelancer on WebGL and React projects.

Who and what inspired you to pursue a career in music?

Jack: My first music role models were my dad and uncle who were musicians in a Ska band called the Potato 5 in the eighties, and would play me old cassette tapes of their music, and lots of ska, reggae and dance music. Their dad was also a musician, he played the violin and piano, so there’s a bit of nature & nurture going on. Despite that, I really struggled with learning instruments as a kid (mostly because of Dyspraxia and a short attention span), but listened to a lot of music, and became aware of dance music and DJ’s at about 8 or 9 years old.

Around the late 90’s, groups like The Prodigy, Chemical Brothers, etc. were in the charts, and DJ culture had become huge, and I found it fascinating that music could be made with gadgets and computers, without needing to learn instruments the traditional way.

When I was a bit older, I started to learn more about the London underground music scene, pirate radio stations, raves. I was drawn to the attitude of it all - DIY, creative ways of putting on parties in weird spaces, the culture of sampling and sharing sounds, the economy of techy people building and modding music machines, creatives making music on them, and DJ’s playing the music to enthusiastic ravers over home-built sound systems. 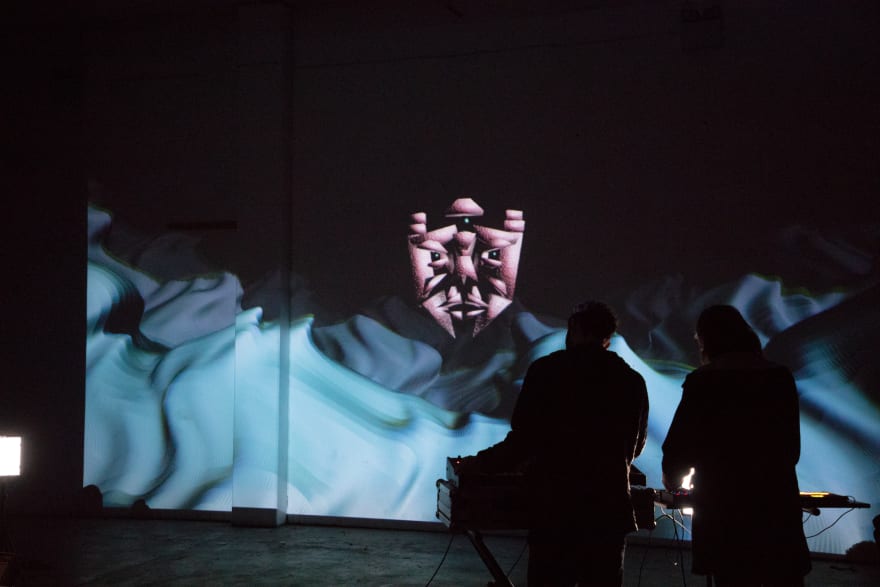 What kind of music do you play and why? What’s behind the name, Polyop?

Jack: The music incorporates a lot of interests; techno, disco, electro, breakbeat, psychedelic-jazzm and acid. I have seen the term ‘genre-fluid’ being used recently, I like that, and I think it’s a testament to the times, people are a lot more open to more variety in electronic music now, now that everything's been uploaded and catalogued online, older music is bubbling up to the surface, and inspiring new generations.

Alex: The name is just a misspelling of the juvenile form of a jellyfish, a "polyp". We like the name because of the "poly" part. It just sounds a bit geometric I guess!

What/who has most influenced the work? What themes are you trying to uncover in your show?

Jack: We’re definitely both inspired by 90’s video games, that great time before they worked out what they were doing with 3D games and everything started became overpolished. For example, Zelda: Ocarina of Time, and the Rare games like PerfectDark – their graphics left a lot to the imagination, but actually, I think the games were more immersive as a result, they were their own world, based on myths, folklore, and fiction, rather than trying to mimic the real world.

Alex: Interestingly, we’ve found that working with Javascript and WebGL has come with its own limitations (largely based around performance), which has forced us to be creative in ways we wouldn’t have tried otherwise. This has contributed to the show having a semi-retro style and has forced us to be more focused on the fundamentals, such as working with interesting textures and geometries to create weird characters and bizarre scenarios.

What are the most important ideas and concepts that you impart in your works?

Jack: The story revolves around a mysterious demi-god that wakes up from a deep sleep, and he has a run in with an alien clan called the Junkers. There’s a really powerful hallucinogenic substance (actually it’s the most powerful in the entire universe) and their leader, (who we have nicknamed him The Alchemist) is the only one who can manufacture it.

Why did you decide to accompany your music with visuals?

Alex: When we first started working together, we were just going to make a one-off "fun audiovisual web thingy" but somehow turned into a live band. It’s a nice symbiosis, the music is inspiring the visuals and that feeds back into the direction of the music. Having this process has really helped us form the strange world we’re trying to portray in the show.

What technologies do you use while creating visual accompaniments for your music tracks?

Alex: All of the visuals run in the open source app we're developing, Hedron. It's an Electron app, using React for the GUI and three.js for the visuals.

I started making visuals using JavaScript because that's what I knew best! The software was originally a bunch of separate pages running on a local PHP server (yep). I’d switch between Chrome tabs at parties when I wanted to change the effects! After a few more hacky iterations, I eventually felt the need to use something more sophisticated to create the GUI, and I chose React. I always intended to make Hedron open source, so working with libraries that are familiar to the rest of the world, rather than my own tangled system was important.

Using three.js has been really fun. The library is constantly improving and it’s exciting to be making use of new features that weren’t available to us a few years back. I often wonder if I should be using something more powerful such as Unity but the limitations also have their benefits, as it forces me to work in interesting ways.

Would you say your music offers a psychedelic experience?

Which performances or recordings are you most proud of?

Alex: Probably the last gig we did, Null and Void at The Glove That Fits, in Hackney, London. It's a tiny little basement that we didn't expect to work well for the visuals but it actually turned out great. The energy from the crowd in that tiny space made for a very special experience for us!

Do you change your repertoire from season to season or do you have a set of tracks you play regularly?

Jack: This current show started as a storyboarding session two years ago, where we developed a narrative and some characters, and began to piece together acts and scenes. Once we had something we began thinking about what sort of music would work for each part. Every show is a barometer for the next, so the music has changed quite a bit over time, and it's dependent on the environment. Recently, the show has got faster, more ravey, more trippy, which reflects the spaces and parties with been playing in. 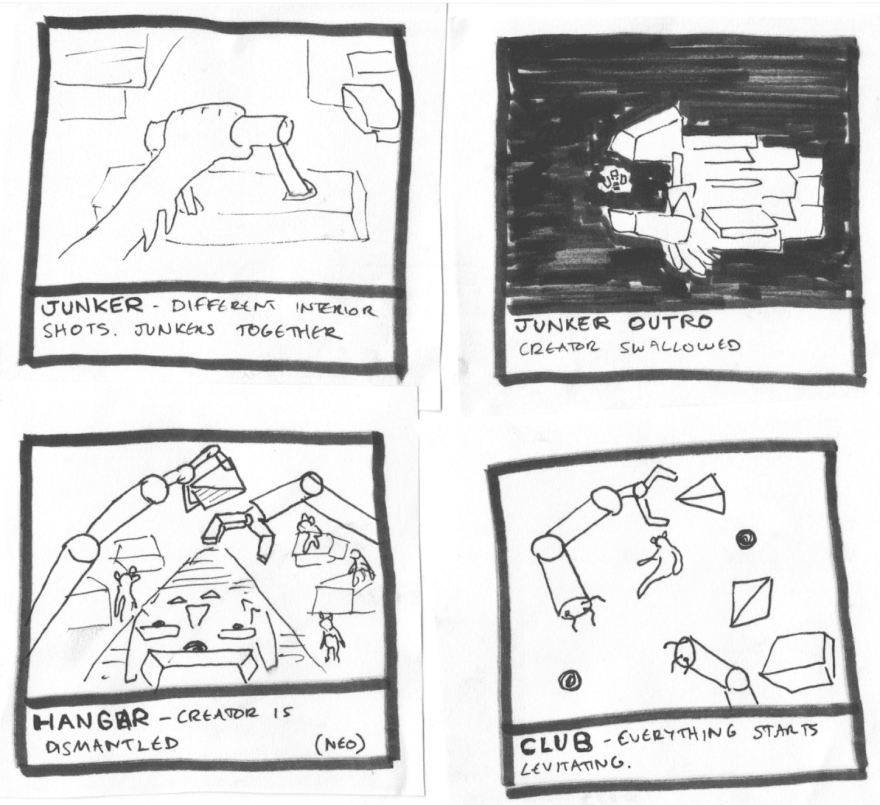 Do you plan to perform something special for React Day Berlin? What are you going to play?

Alex: Some of the alien characters have some new dance moves and we’ve generally been having fun with post-processing feedback stuff lately, to make the show as trippy and colourful as possible.

Jack: We’ve incorporated a new acid machine into the set-up this week, and Frank will be improvising on his EWI, so more improvised jazz synths and even more acid.

A Woman’s Guide to Project Management