So, for the past few months since my last blog post, I hit a brick wall in my progress because I was stuck with this problem when I finally got the chance to work on the music implementation for my game "Maliksi." This led me to take a rather long break out of near frustration and stress, especially because I wanted to move on to other projects, plus I got busy with other obligations to worry about. Now entering 2022, I'm wanting to finally try to finish this game once and for all!

Side-note: I'm still in current development, but I really felt the urge to blog this as soon as I found a working solution.
So it might be a little messy with my current way, but I wanted to preserve this information for future references.
There are probably better ways to do this, but I was at least able to get this to work for me.
For this purpose, I'm using Unreal Blueprinting.
Also, I'm no expert in Unreal Engine, as I'm still learning this engine myself too.

To play a Wwise music event and control its state when transferring to different levels in Unreal Engine.

Coming from a Unity background, I was used to the "DontDestroyOnLoad" feature attached to a game object, where I could let that run even when transferring to different scenes, all until the game closes. From my research high and low, Unreal Engine did not have a component like that.

If you are not sure how to play a Wwise music event into a scene, here is a youtube video for playing an SFX object, but it's essentially the same way for music.
How To Integrate Wwise With Unreal Engine + Play An Ambiance SFX by Scott Game Sounds
Time Stamps:
10:20 - Wwise Setup
15:20 - Unreal Engine Setup

For a brief summary, the life cycle of a game scene or level (this applies to both Unity & Unreal Engine), 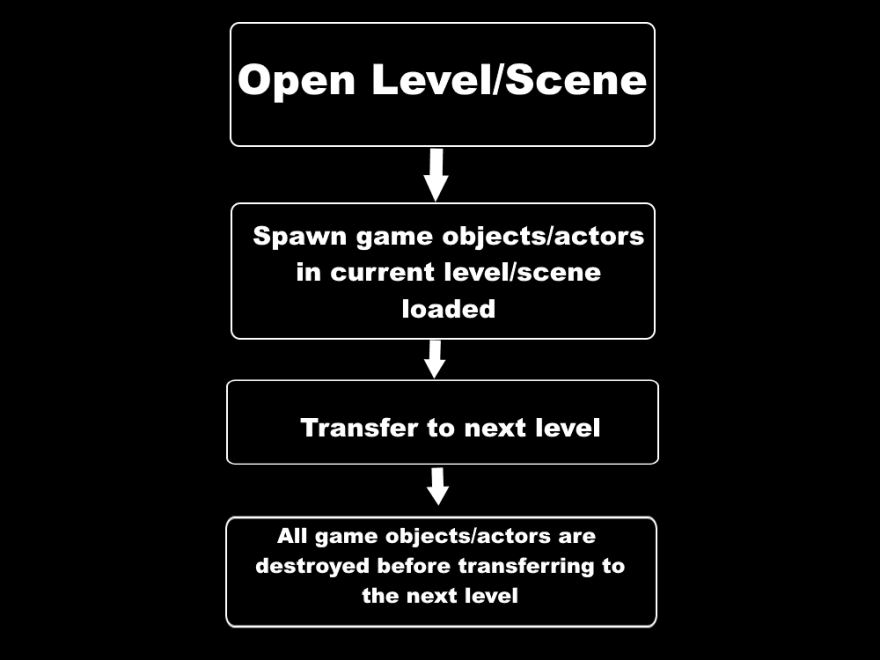 I could just create a new Wwise music object every level and play the music for that level, but I also had a change for vertical orchestration layering. Here is my setup for how I want my music to play. 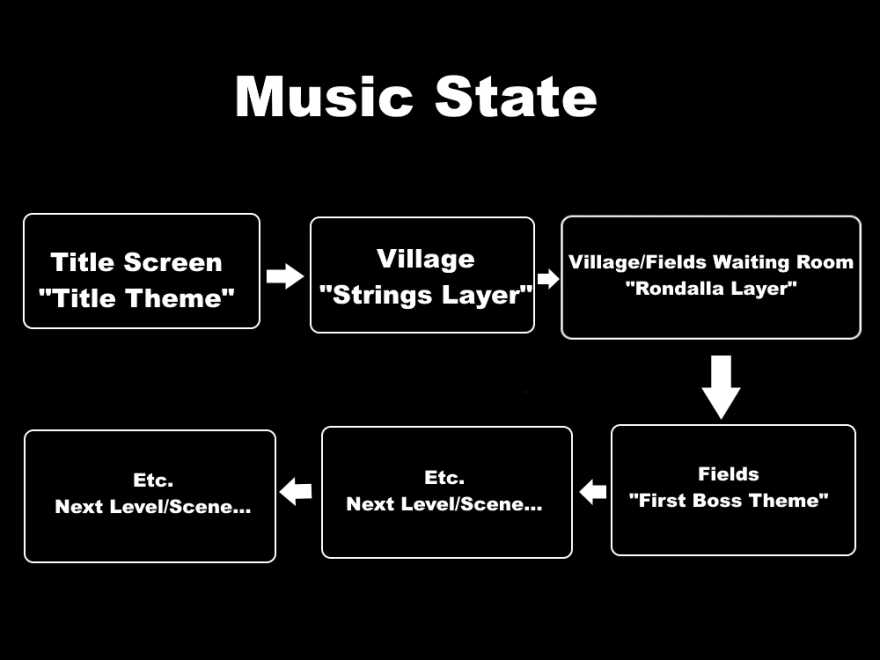 So going back to an early point I brought up, from Unity "DontDestroyOnLoad" was something I needed to find something that's similar on Unreal Engine. Here were two options I found:

I experimented with both, but which one worked in my favor at least? The Persistent Level choice. You can skip to the Persistent Level section to read about using that one, I wanted to share my experience with the problems I occurred trying out with game instances.

So what are game instances? These are objects that are created as soon as the game loads, mainly like in it's own storage. You can possibly think of them as static since they can only exist once but its values can be altered.

For example, I use game instances in my game as unlocks, when Malik defeats a boss, she gains a new skill unlocked, which retrieves the game instance to tick that THAT certain skill is now unlock because the particular boss is now defeated. With this in mind, I thought I could use this to save the state of the game object that contains the Wwise music event. However, I realized that you can't save objects or actors onto game instances, only variables with data type values such as int, boolean, string, etc.

Although, I could possibly still use the game instance to save and alter the state value, but I ended up not doing it when I tried implementing the 2nd option.

What is a persistent level? It's a level that will be continuously running along with your main levels and maintains any objects contained in that level. For example, this can be applied to maybe having the character UI run throughout the game or certain environment assets.

1 - Create a new empty level, name it anything you want, I named mines "MusicManager".
2 - From your first level opened, mine specifically is "Title", open the levels window. 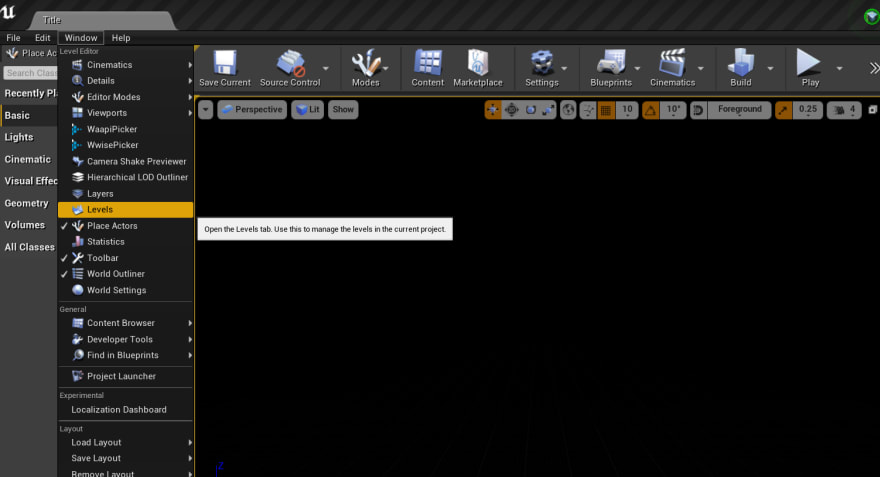 3 - At the top should say "Persistent Level," drop the "MusicManager" level under. 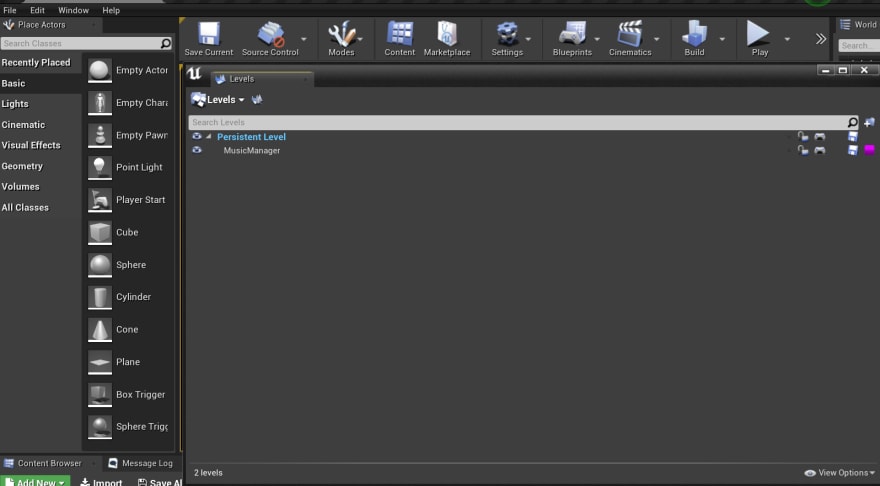 4 - Right click the "MusicManager" Level in the Windows Level, go through to the drop menu to "Change Streaming Method" and make sure the "Always Loaded" option is checked. 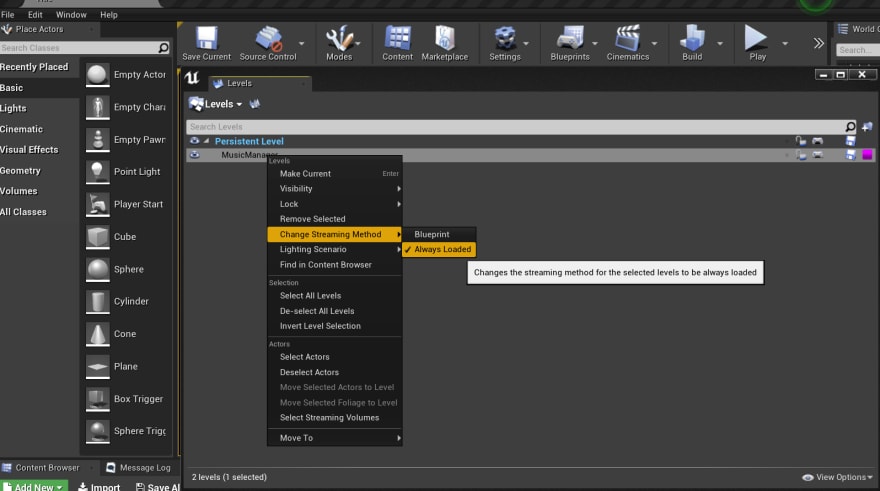 5 - Create a new actor new blueprint, I called mines "musicObj." Attach an AkGameObject component (or Ak component, I believe either should work).

Get the current level name, use that as the condition for a switch statement for each of your levels (you can probably create an array too to manage the levels as well). 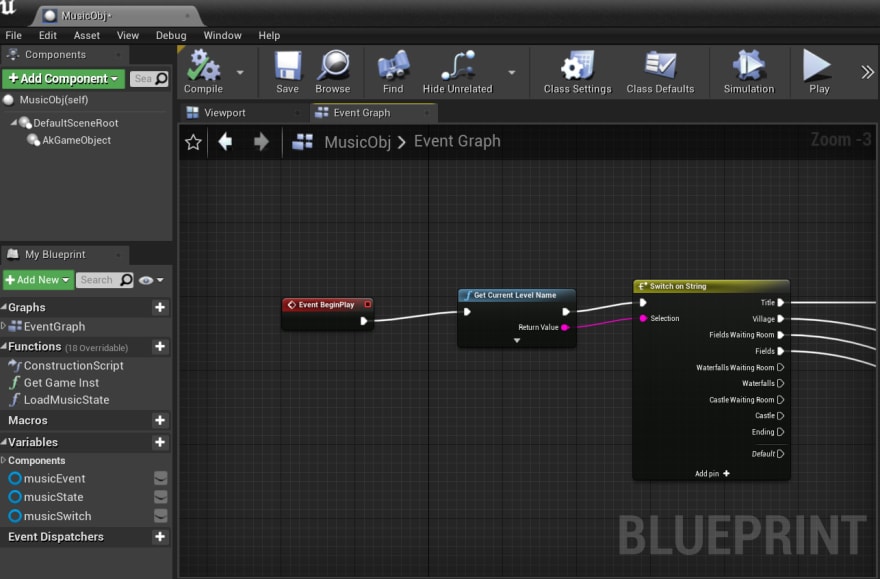 6 - The starting condition will immediately set state to the music state event I have already set up in Wwise and then post event. Make sure that the post event references itself.

7 - As the following conditions, it just has to set state.

7.5 - Note, if your music event ends, such as playing an ending stem but still want to play the next music event, just add another post event after. I did test this and it worked. 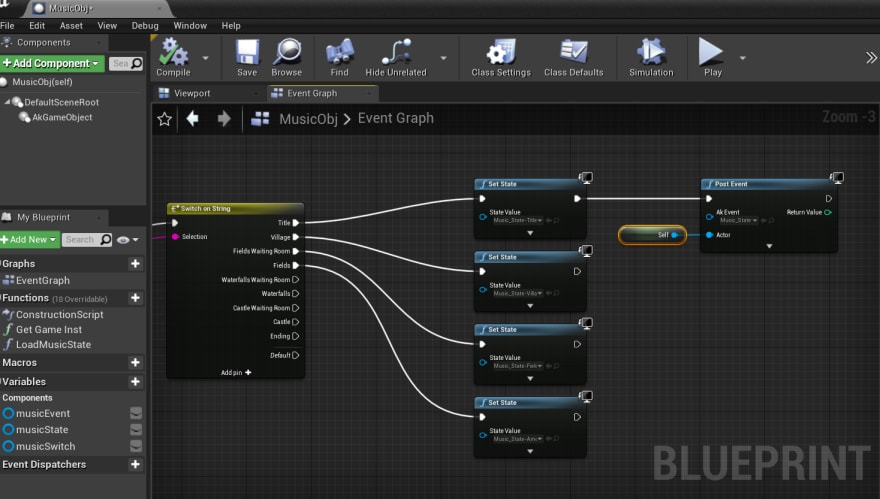 8 - For each level, I attached the "MusicManager" level on to every level, repeating steps 3 and 4.

Although, I still have not tested yet on retries when my character dies or back tracking in my levels (although for my current design I'm not allowing back tracking). I presume at least with this set up it should allow it to set state and change the music state event when you back track levels too.

Here is also my current set up for the Wwise side as I have the music states set up accordingly. 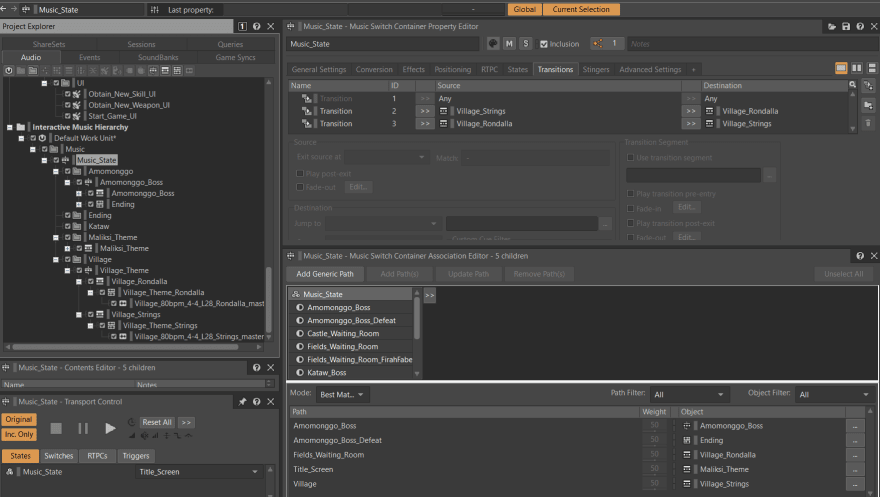 With this hurdle finally overcome, I feel that I can finally finish this game project once and for all! Thank you for reading and I hope this helps for the game audio folks because it was really difficult for me to find resources on Unreal Engine and Wwise for music, especially when working with multiple levels.

Here is a preview and link to my upcoming solo game "Maliksi." 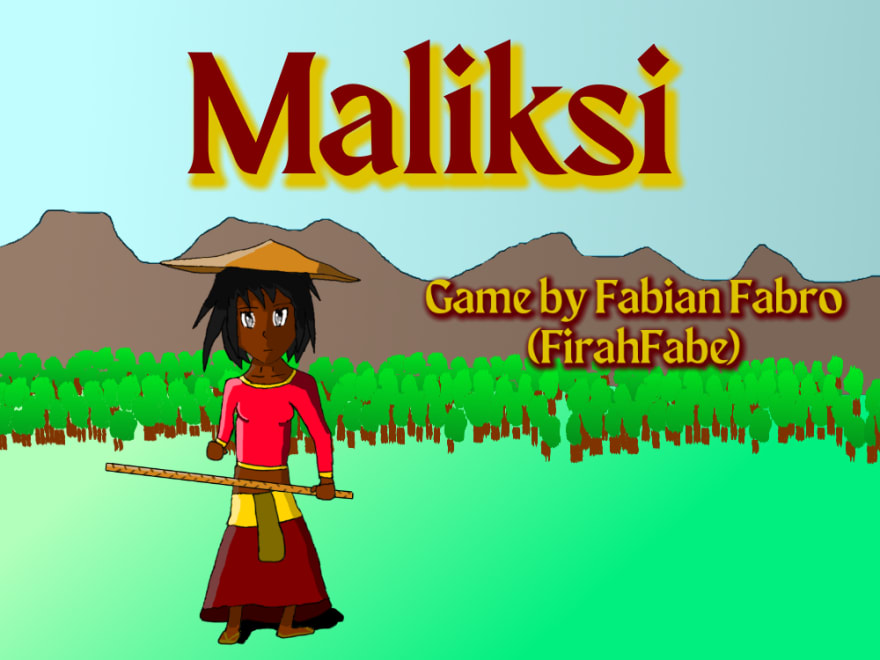 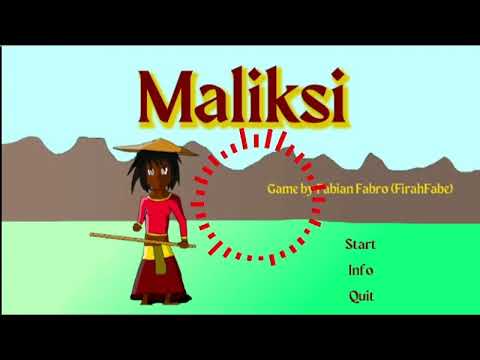 Once unpublished, this post will become invisible to the public and only accessible to Fabian Fabro.

Thanks for keeping DEV Community 👩‍💻👨‍💻 safe. Here is what you can do to flag fihra:

Unflagging fihra will restore default visibility to their posts.