Disclaimer
The post contains the thoughts of a preliminary investigation on how Angular works reading some parts of the source code, debugging a simple application and reading how the compiler works. Some terms or definitions could be wrong.

Why does Angular have a compiler at all?
Main job of the compiler is to turn the template you write into the code that runs the Angular runtime.

In Angular, the developer write templates declaratively that is what to render, the binding, etc. but not how it happens at runtime, there is not description about how the change detection mechanism works. The Angular runtime does not understand the declarative template syntax so it has to be translated into something the runtime can run into a browser.

The compiler takes the declarative Angular syntax and turns it into imperative code.

Why, again, a compiler is required? not possible to do by hand?

A more detailed introduction about Angular Ivy can be found at 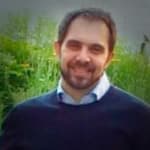 The work done on the new Angular compiler can be divided in three categories as stated in the implementation status:

The Ivy model foresees to compile the Angular decorators like @Injectable, @Component, etc into static properties.

All the decorators do not need global knowledge of the application, except @Component which requires information coming from @NgModule. In the module other selectors used by the component template are declared and so the transitive closure of the exports of that module imports.

Without those information the component def (ɵcmp) cannot be correctly generated.

Consider the Welcome to Angular! application:

The previous code is characterised by decorators like @Component and @Input, part of the Angular template declarative syntax that provides developers with an easy template grammar to both

Tip
For most of the developers the binding is just the use of the same variable name between the template and the controller, but there is a mechanism that manages the change detection at runtime. This is a great thing and the Angular compiler automatically adds this mechanism. Less boilerplate code, templates are mode readable and less error prone.

The Angular runtime is a collection of JavaScript instructions/functions able to render a component template into the DOM and to answer to change detection when something in the model has changed (MVC). Everything must be in JavaScript, ready to be run, so the Angular declarative syntax is translated into these instructions.

To make it more clear try to develop a standard Web Component: when the developer has to deal with the template he must deal with the DOM API to create an element and attach it to the DOM, write some code to detect changes in the model and update the view. In the Angular code there is not trace of these operations since a template is translated into JavaScript imperative code, a series of JavaScript instructions, part of the Angular runtime, that, when invoked, creates the component in the browser.

Most of the tedious and repetitive job is done by the Angular compiler in conjunction with the Angular runtime.

The developer just writes the Angular modules and components, that is the what, via the Angular declarative syntax but it does not know/care about the how, that is how things are executed at runtime: compiler enables to decouple the what from the how.

This approach has multiple advantages:

Angular 9 has been recently released, generate a simple project with Angular 9 running:

In case you already have a workspace with some changes you have to commit or stash them, otherwise add the flag --allow-dirty.

If you already have the old Angular CLI, it seems the better way is to uninstall the old one and the install the new globally.

There are two compiler entry points in the @angular/compiler-cli: ngtsc and ngcc.

It is the TypeScript to JavaScript transpiler that reifies the Angular decorators into static properties. ngc works like the ngtsc when Ivy is enabled.

It is the Angular Compatibility Compiler that process the NPM library code from the node_modules folder producing equivalent library code Ivy compatible. ngcc can also be run by a code loader like Webpack to get packages transpiled on demand instead of written in the node_module package folder.

Open the package.json and add the ngc script:

In the tsconfig.json set "declaration": true, in order to have the .d.ts files as well, then run:

The result of the component compilation is located at dist\out-tsc\src. The Welcome to Angular! component is translated into:

and then the app.component.d.ts definition file:

Attention
By default Ivy is enabled, if you disable it you will get a different compilation output.

With Angular 9, thanks to Ivy, the compilation is faster and by default "aot": true.

Both TypeScript and Angular Compiler preserve important metadata that cannot be part of the emitted .js files. Angular enhances the .d.ts files with framework specific metadata to be reused for better component type checking.

JavaScript code has no type information, it is just ready to be executed in the browser. The TypeScript compiler has transformed all the .ts source files but typing information are not totally lost, the definition files help to preserve the interface for future use.

The definition file brings type information{: .italic-red-text } to help TypeScript to static type check the usage of the library. Fo example, when an application declare a npm dependency library can then import functionality:

TypeScript will static type check the use of the library in the app.js exploiting the library.d.ts definition file:

An Angular component has some useful information declared in the decorator like the selector. These information are really important to use the component elsewhere and static type check the code.

The Angular Ivy compiler has been improved to not waste this information and to enrich the definition file public interface. For instance, the following Angular component:

will be compiled into JavaScript and the metadata will enrich the definition file as following:

The definition file became the component public API{: .italic-red-text }. The compiler can exploit it in order to type check the code that will use it:

The following diagram, thanks to Angular team, shows the normal tsc flow and the steps to transpile a .ts file into the .js one.

TypeScript tsc provides some extension points to alter its output:

The ngtsc is a wrapper around the tsc, the TypeScript compiler, that extends and modify the normal compilation flow.

Starting from the tsconfig.json file, the TypeScript process discover the application source files via the import statements.

The Angular compiler takes all the .ts files collected and, class by class, looks for Angular declarative syntax code, basically Angular things. The compiler gathers isolation information about components for instance, but not about modules. Remember, for the @Component the compiler requires a global knowledge about the module due transitive closure resolution of the exports of the component module template imports used in the component template.

The Angular compiler looks again at the whole application but this time in a larger picture including modules as well. All the code now is understandable and parsable by the next step of the TypeScript compiler. Optimizations will take place at this step.

TypeScript checks error in the application, templates included, that now are a series of imperative instructions.

The most expensive operation in the compilation process, the TypeScript code is transformed into JavaScript ready to be run by the browser. Angular component classes have now only imperative code to describe what a template looks like.

Angular compiler has many interesting features, some of them have been enhanced and improved with the new Angular Ivy architecture. Let's see some of them.

The module scope allows the compiler to resolve uniquely the Angular components used by the application. Consider the following application module:

The module decorator property declarations is the module compilation scope, it holds an array of Angular components used in the application templates. The HelloComponent is a component coming from a library with its own definition file enriched with metadata as seen before.

The compiler can than uniquely match the component, verify the use of the selectors along with its attributes.

A module can be used to export Angular components as a method to make visible the external world some implemented components.

Tip
The module pattern is quite frequently used in computer languages as a way to separate a complex application in small chunks that can be reused elsewhere. Just think about ESM or CommonJS etc. Angular provides a way to create a modular application via the module concept as well. A module is used also to hide implementation details and to select what should be public. The exports property is the way chosen to make Angular component public so re-usable by the rest of the world.

In the following example the HelloModule both declares and exports the HelloWorld component. The module library just implements one component and exports it to all the applications that want to use it:

When an application wants to use the HelloWorld component has just to declare it:

The compiler then can:

the compiler can follow and evaluate the import references. Some evaluation are just partial since there are not enough information at compiler time.

only at runtime some values will available. This value are dynamic expressions. The compiler sees the previous object more or less like this:

The compilation does not stop, it goes on since a situation like this could be quite common.

While the compilation goes on for modules properties, it cannot for viewportSize since the value cannot be figured out. An explicative error message is produced about styles.

A template and expressions

they are compiled into TypeScript code becoming type check blocks. So blocks are sent to TypeScript compiler and possible errors are then return in the context of the template.

How is it possible to return an error in the context of a template? Well, code is translated with additional offset comments that allows then the contextualization.

Angular version 9 with Ivy enabled maintains the behavior of the fullTemplateTypeCheck flag and introduces a strict mode with the flag strictTemplates that goes beyond the Angular 8 type checker. Activate the strict mode in the tsconfig.json:

Re-run the npm run ngc and get a full better error reported by the compiler:

The Angular 9 Ivy rendering architecture introduces a new compiler and a new rendering engine not only to exploit the incremental DOM technique but also a more powerful compiler.

Ivy is enabled by default, --aot is the default way of developing since the new compiler is faster than the previous one. Having AoT mode enable by default reduces also the risk of discrepancies between development and production code.

Ivy compiler goes even further, it has a better type-check making the reported error much more explicative and easier for the developer to identify the root cause of the issue.

We all are looking forward to see the new compiler applied to Angular Elements.

🙌 How to get rid of vulnerabilities with just NPM 👀