In my very first post we went through solving Rock, Paper, Scissors game using a 'mathematical' approach, and that entry ended with an open question:

Can you find a similar, mathematical approach for Rock, Paper, Scissors, Lizard, Spock?

I invested no time at all in thinking about this variant until a few days ago, when @jotagarciaz asked that same question to me and sparked my curiosity.

Let's start from the original game: 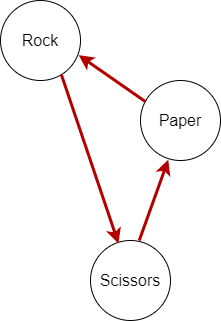 Those traditional Rock, Paper, Scissors rules still apply, but two new options are added to the game: Lizard and Spock.

Let's introduce the simplest rules related to those new options: 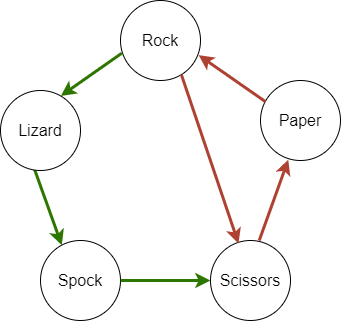 No huge surprises for now. Let's add another rule: 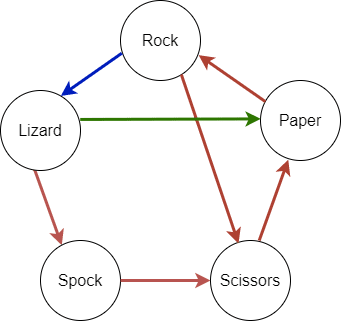 We can already imagine a possible pattern in the arrow diagram, which gets confirmed when adding the next one: 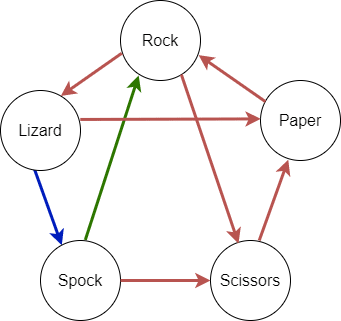 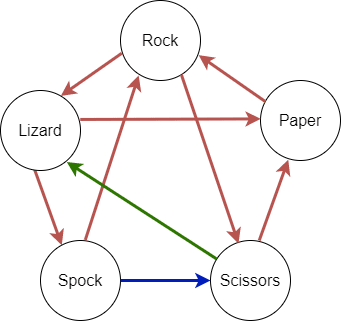 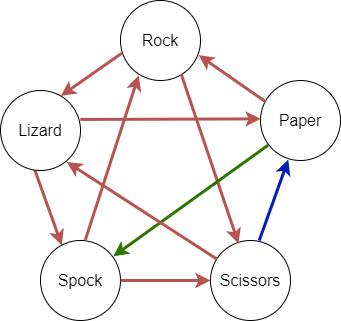 After going through all the new rules one by one, we can conclude that there's definitely a pattern.

We can also observe such pattern by reflecting those rules in a double entry table, providing we use Rock, Paper, Scissors, Spock, Lizard order (that is, swapping Lizard and Spock positions in the game's name).

I wonder how Doctor Sheldon Lee Cooper missed that!

Once all rules are applied, we end up with this final diagram: 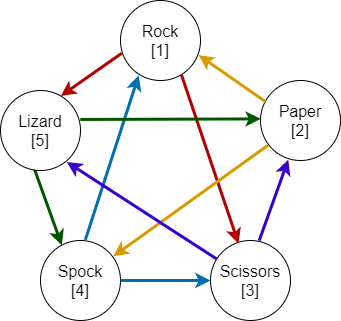 Analyzing this figure and/or the table we saw above, we can write the pattern we've identified as:

That's a really solid start, but still not enough. We need some mathematical relationship to be able to transform that into code.

Let's remember what we concluded for Rock, Paper, Scissors:

We have to find something similar for our pattern, and that's why we added numbers to the diagram above.

Let's write down some examples and try to induct a general rule that satisfies them all:

By carefully observing the examples, we can induct that:

Feel free to take any other example and verify that it satisfies those statements.

If we implement them using C# 8, we get the following function:

When we compare it with Rock, Paper, Scissors solution, we see that this algorithm is a generalization of the algorithm we used there, exactly how it's supposed to be, given that we're now solving an expansion of that game.

Here is an example of an interactive console application that plays Rock, Paper, Scissors, Spock, Lizard with us, and which is based on the previously defined algorithm.

Note that this code can also be used for Rock, Paper, Scissors game if we remove Spock and Lizard from enum Item (line 6).

I hope you've enjoyed this analysis of Rock, Paper, Scissors, Spock, Lizard and/or that you've found the provided solution interesting!

How to Install WordPress Code Standards using Composer on Mac

From lawyer to developer without a CS degree

Intro to Azure Storage with .Net 5