I'm sure all of you have played Rock, Paper, Scissors, a simple hand game that is said to have been around for nearly 2000 years. 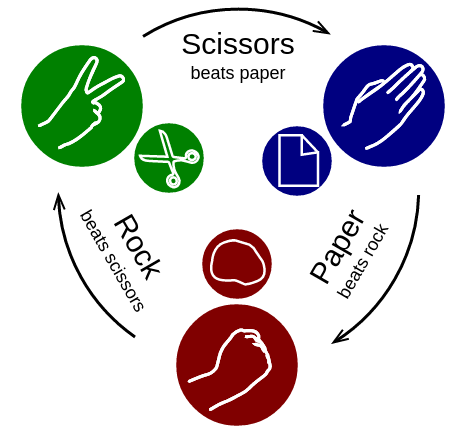 But has any of you acted as a referee in that game?
Probably not, and that was exactly the purpose of the first problem of Tuenti Challenge 10 (a competitive programming contest that took place early this year): you had to programmatically create a referee for it.

Essentially, the problem consisted of:

Hopefully that sounds easy. What makes this challenge a good one for beginners is its simplicity: it can be easily solved with a bunch of if/else statements.

However, in this post we'll be exploring an alternative, 'mathematical' and hopefully more interesting approach to solve it. Let's have a look!

First things first, we need numbers to be able to justify the mathematical word in the title of this article. Let's associate each possibility with a number:

If we combine those numbers and the rules of the game, we get:

What do we have here?

Well, indeed, but we're not going down that path today. However, the key fact to observe has to do with exactly that: all combinations follow the same pattern (big number beats small number) but the last one (where small number beats big number).

And that's a fact that remains true even if we shift the possibilities (keeping the same order) and use different, consecutive numbers:

Which would leave us with

Our base conclusion is that all combinations follow the same pattern except for one.

In order to create an algorithm that can solve our problem, the first step now is being able to identify that odd combination, the one that doesn't follow the general rule.

Let's put together our pairs of numbers:

Now it may be easier to spot that the combination that behaves differently is the one whose numbers aren't consecutive.

Let's summarize what we've got:

We can use the result of Math.Abs(player2 - player1) in a switch expression to check if the numbers are equal, consecutive or something else; and act accordingly.

[Disappointed reader] "Hey, but hold on a second, those are numbers, not strings!"

We already know that it doesn't really matter which numbers we choose, providing they follow a given order. That allows us to get advantage of enums, which are based on integers, in the following way:

Let's have a look at what's exactly happening here:

You can find here the complete implementation I used for the challenge, which includes reading the data from an input file and writing the results to an output one.

Now a small test for you, avid reader:

Can you find a similar, mathematical approach for Rock, Paper, Scissors, Lizard, Spock? 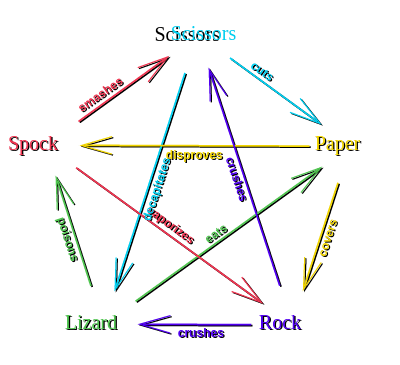 How to pass job interview - chat with tech recruiter

#VisualizeIT: A free online series of workshops to build your visual storytelling skills!