Javascript is an wonderful dynamic language; it allows us to do many things either on the backend layer with Node or the frontend of our application. One of the things that we do the most in javascript is endpoint calls that are later used to compute information and finally show it to the user in a friendly and polished way. We usually try to avoid at all cost additional requests and computations so that our application performs at its best. On this article, we're going to be exploring a technique that will help us improve on this matter, so without further ado let's get into it.

The idea is to take advantage of the browser's memory to store data that usually requires heavy computations to obtain it, and that's likely to be reused in the future, in this way we have the information ready to be accessed, and we don't have to re-run tasks to get it, this technique is known as memoization.

Understanding the dynamic behind it

The image below explains the basic flow behind memoization to understand better how it fits in our application: 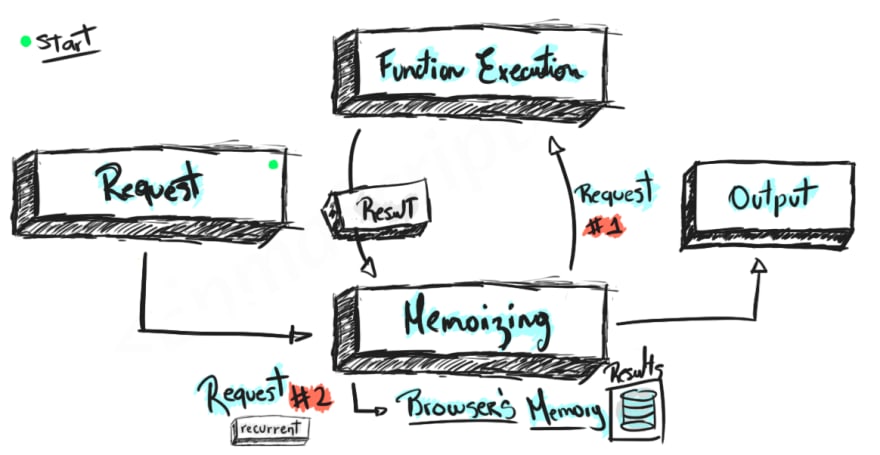 It's recommended that we employ this technique when our function meets the following requirements:

What is required to memoize our functions?

Ideally, to memoize a function it should follow the principles of purity, meaning that it should not contain side effects, it should explicitly depend on its arguments and return the same output for the same arguments passed. In this way, we can guarantee a successful memoization layer that's automatic and argument-dependent; this is pivotal for the technique to work consistently.

As mentioned at the beginning, one good use case for memoization is to avoid making extra network requests when the data we need has been already fetched and the computations to clean and show these data were already executed.

If you have what we call a "robust" architecture, you probably have a caching layer in the backend like Redis to avoid receiving consecutive hits on the database every time a user asks for recurrent information. If we apply this technique to the function that executes the GET request, we can even avoid making the endpoint call meaning that the network won't get agglomerated with tasks. Let's see how we can interpret this:

Now, this being said, memoization is something you'll apply in your applications as you notice that your functions meet the requirements.

Ok, it's been enough drawing and theory, let's create our own custom memoizer.

For what we've learned we know that the memoizer should receive a function as argument, then, we need to store the results in some data structure to be able to retrieve them later based on the function and arguments passed, let's see:

In the implementation of the memoize function persistency works thanks to closures, The cache object is stored in memory thanks to the variable memoizedAdd, then, thanks to that variable we're able to execute the returned function and get the results as needed. If you have issues trying to understand this concept, I recommend you to read the article about Higher Order Functions.

If you analyze the previous implementation a little bit you will realize that we have to worry about a couple of things:

Memory consumption, if the results and keys we're storing are large sets of data and we store them multiple times this could cause memory issues in the future, this won't happen often but it's important to keep it in mind.

Knowing this, here a more complete implementation that will allow you to clear the cached elements.

With this we're able to clear the cache manually when we need it, and example of usage:

And just like that we have a more complete implementation. Also, thanks to the count and clear method we can clear the cache when we consider it relevant.

It's worth mentioning that this technique is widely used, if you have used selectors in redux in the past you'll find out that Reselect applies memoization; also libraries like lodash have their own implementation...

Important to know: you don't explicitly need a function called memoize or an isolated function for that matter to apply this technique, as long as your implementation respects the principle behind memoization, you can implement it in a custom way based on the functions you're working on, the examples on this article are just a reusable way to apply this principle.

Ok, guys, I think that's it for now, I hope you've enjoyed the article... If it was the case remember to share it with your friends and coworkers. If any questions remember you can catch me in twitter at @duranenmanuel.

See you in the next one!

Once suspended, duranenmanuel will not be able to comment or publish posts until their suspension is removed.

Once unsuspended, duranenmanuel will be able to comment and publish posts again.

Once unpublished, all posts by duranenmanuel will become hidden and only accessible to themselves.

If duranenmanuel is not suspended, they can still re-publish their posts from their dashboard.

Once unpublished, this post will become invisible to the public and only accessible to Enmanuel Durán.

Thanks for keeping DEV Community 👩‍💻👨‍💻 safe. Here is what you can do to flag duranenmanuel:

Unflagging duranenmanuel will restore default visibility to their posts.