A ChatBot has become one of the must-have features of modern-day web applications. It plays a huge role in customer service which was once traditionally held by human beings. Through ChatBot, you can automatically generate a response to a user’s input by making use of different machine-learning techniques.

Note:- If you encounter any issues throughout the tutorial, you can check out the code in the GitHub repository.

This guide assumes that you have intermediate-level Django knowledge.

To implement the ChatBot, the following technologies will be used:

We will dive into the details of each of them, but first, let’s set up the project. I have created a starter Docker template with all the configurations so that we can move forward with the development without wasting time.

Create a folder on your local machine > cd into it > clone the template:

This will generate the following folders and files inside your project:

There isn’t much going on except a basic Django setup in Docker with web, db, redis, and celery services. Refer to this article for more information on how to set up a Django project inside Docker. If you don’t want to use Docker, you can also follow along by setting up a virtual environment and running the necessary services on your machine.

In the root directory of your project, there is a file named .env.template, rename it to .env and update the environment variables accordingly.

Great, now build the image and spin up the containers by running:

Add it to the list of installed apps inside settings/base.py

Hurray! Let’s move on to the next section where the fun begins.

It goes without saying that in a typical Django project the client makes an HTTP request > Django calls the view that is responsible for managing this request and returns a response back to the client.

This communication is pretty standard. However, ever since Django introduced ASGI and started supporting it natively, writing Django applications with asynchronous code has become possible. ASGI not only allows you to run asynchronous apps, but it also makes it possible to work with more advanced protocols like WebSockets.

Django Channels, which is built on ASGI, goes beyond HTTP and support other protocols such as WebSockets. The underlying implementation of Django Channels is very similar to regular HTTP views.

That being said, the following packages are needed to set up channels in a project:

Both of them were added to the requirements.txt file so they must have already been installed when you built your Docker image.

Daphne is an HTTP, HTTP2, and WebSocket protocol server for ASGI, and was developed to power Django Channels. This server needs to be added to the list of installed apps so that it can take over the runserver management command.

Note:- Please be wary of any other third-party apps that require an overloaded or replacement runserver command. Daphne provides a separate runserver command and may conflict with it. In order to solve such issues, make sure daphne is at the top of your INSTALLED_APPS

Next, go to your project's asgi.py file and adjust it as follows to wrap the Django ASGI application:

Finally, set your ASGI_APPLICATION setting to point to that routing object as your root application:

Perfect! From this point onward, the daphne development server will be run. To ensure this, fire up the containers by running:

Alright, this application is going to require a single view where the user and the ChatBot can interact. For this, let’s first set up Tailwind CSS in the project.

There are many ways to set up Tailwind CSS in Django. One way to do so is by using a package called django-tailwind. This package provides an easy way to use Tailwind CSS in a Django project.

This package was included in requirements.txt so it must have already been installed when you created the Docker image.

After installation, add tailwind to the list of installed apps in the settings:

Now, Create a TailwindCSS-compatible Django app. When prompted for the app name you can give it any name or proceed with the default theme

Add the app - theme to the list of installed apps in the settings:

Register the generated app theme by adding it to the settings as follows:

Perfect! Now, head over to theme/templates/base.html This file will be used as a base template to include Tailwind’s style sheet in all the other templates. Let’s modify it as follows:

Put the following snippet inside the file:

The above is a basic Django HTML file with a div where chat history will be displayed and an input box for the user’s input with the submit button.

Next, create a view that will render the above template:

Then, Create urls.py module inside the chat app and map the ChatView to the URL patterns.

Finally, go to the project's urls.py file and include the chat app's URL:

Done! Now, make sure the styles are applied properly and that what we have so far is working.

In another terminal spin up the containers:

Note:- If the styles aren’t applied, make sure you have started tailwind and restart the containers.

Inside chat.html, you need to write a script that will open a WebSocket connection to a Django Server and listen to the established connection to send and receive data.

Open the chat.html file and add the following script just under the body block i.e. {% endblock %}

A Channel layer provides an abstraction for multiple consumers to talk with each other and with other parts of Django. It is the middleman that passes messages from senders to receivers. The Channel layer that will be used in this guide is Redis. Aside from serving as a WebSocket communication, Redis can also be used as a:

It is an all-in-one tool!

We have already configured a Redis service inside Docker. Django Channels also needs to know how to interface with Redis. This is provided by a package called channels_redis

channels_redis is an officially maintained channel layer that uses Redis as its backing store. It is already included in requirements.txt so it must have already been installed when you built your Docker image.

Next, add the Channel layer settings:

A channel layer has the following:

1) Channel - a mailbox where messages can be sent to. Each channel has a name. Anyone who has the name of a channel can send a message to the channel.

2) Group - a group of related channels. A group has a name. Anyone who has the name of a group can add/remove a channel to the group by name and send a message to all channels in the group.

When a WebSocket API opens a connection, Channels need to be informed where to look to accept and handle the connection. This is where Consumers come in. Consumers correspond to Views in normal Django HTTP requests.

When a message is sent from the client, it is received by the consumers listening to the group or channel on the other end.

Create a file named consumers.py inside the chat app and add the following:

Similar to urls.py Channels uses a routing configuration to route to the consumer. Inside the chat app, create a file named routing.py and add the following:

Next, head over to asgi.py and modify it as follows:

Now, if you head over to http://localhost:8000/ and type in any message, you will get a response that says “Bot says hello” 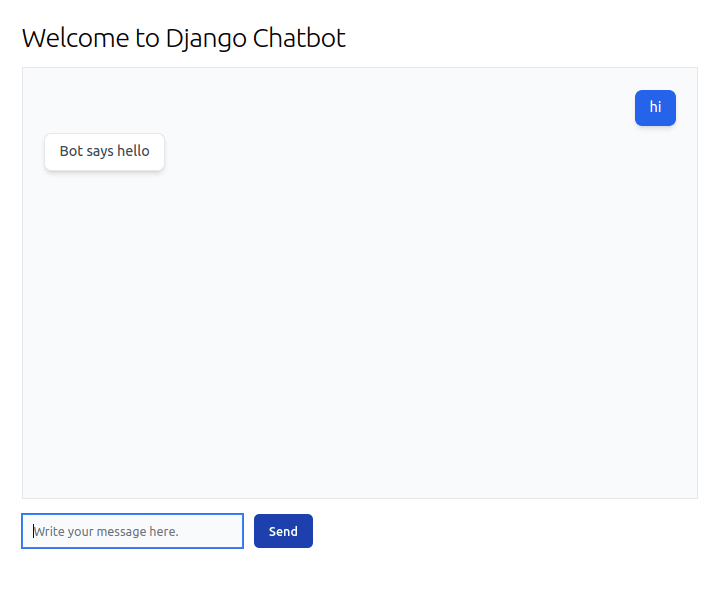 Great! Now, the response to a user’s input needs to be automated. Let’s do that in the next section using ChatterBot.

ChatterBot is a Python library that makes it easy to generate automated responses to a user’s input. To use this in your project, add it to the list of installed apps in the settings:

For a list of logic adapters, you can check this out. For the purpose of this tutorial, let’s use a single adapter called Best Match Adapter. As the name implies, the BestMatch logic adapter selects a response based on the best-known match to a given statement. Let’s add it to the settings:

The following diagram from ChatterBot documentation provides a very nice flow of what goes behind the scenes. 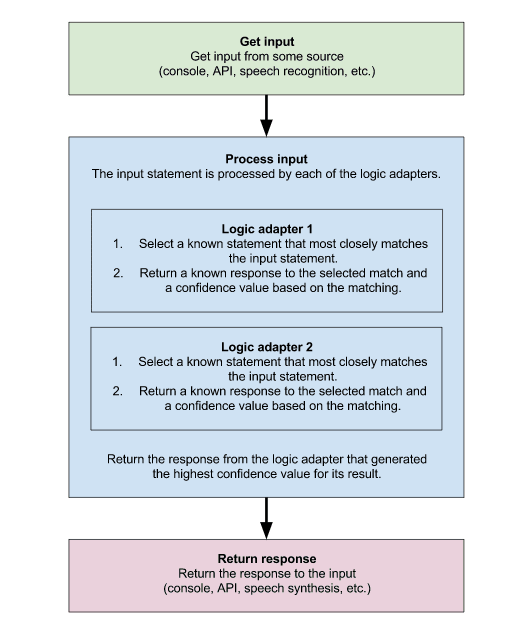 In the beginning, a ChatterBot instance is like a blank slate. This means that it starts off with an empty database. You fill it with statements (a single string of text representing something that can be said) and gradually it learns to reply to your input with higher accuracy. This training process is going to take some time. In order to simplify this process, ChatterBot provides multiple ways to initially train your bot. In this tutorial, you will learn how to train your bot using sample list data.

Put the following script inside train.py

Next, run the following command to load the example dialog into your project’s database.

and go to the admin panel http://localhost:8000/admin/ Go to the statements tab and voila, you will see a list of texts with their responses. 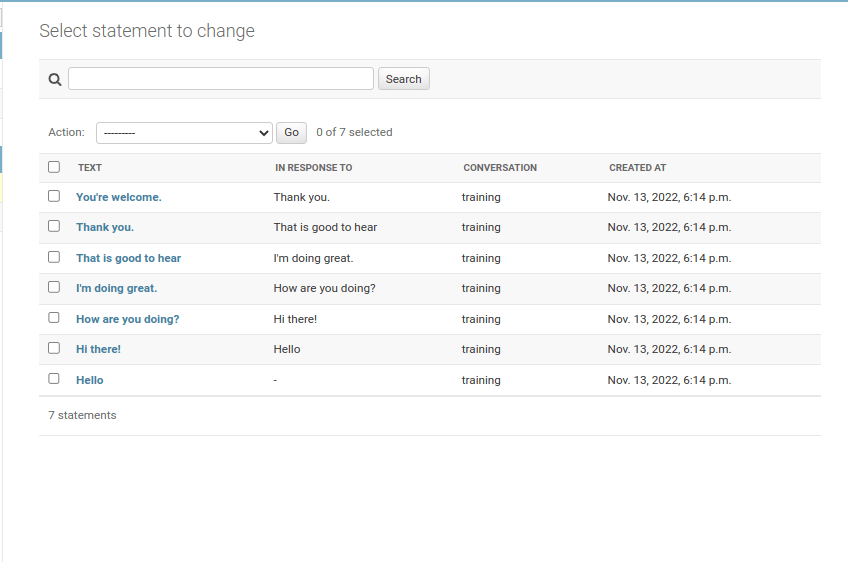 Needless to say, generating a response from ChatterBot is time-intensive. This is where Celery comes to the rescue. Celery will pick up queued tasks and manages a separate server to run them in the background. As mentioned before, we will use Redis as a message broker. It is already set up in Docker so let’s proceed to defining the task.

Create a file named tasks.py inside the chat app and put the following Celery task:

You have to restart the container so that Celery can pick up the task and add it to its queue. Press ctrl + c and run:

Go to http://localhost:8000/ and type in hello and you will get the response back 🚀 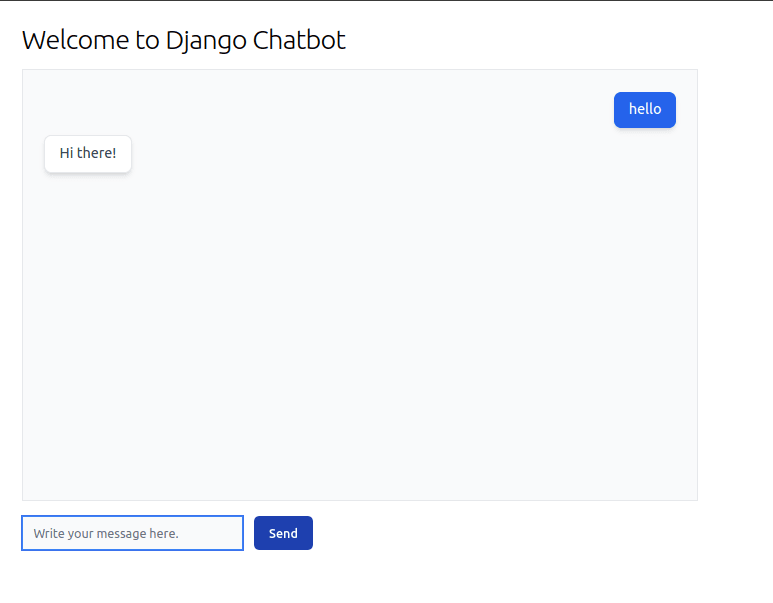 This tutorial is intended to be a starting place. The ChatterBot documentation is very concise so make sure to check it out to implement more features. For instance, you can train your data with corpus data. You can use multiple logic adapters or even create your own. In addition, check out Django Channel’s documentation to understand more about consumers, channel layers, and so on.

If you got lost somewhere throughout the guide, check out the project on GitHub

Once suspended, documatic will not be able to comment or publish posts until their suspension is removed.

Once unsuspended, documatic will be able to comment and publish posts again.

Once unpublished, all posts by documatic will become hidden and only accessible to themselves.

If documatic is not suspended, they can still re-publish their posts from their dashboard.

Once unpublished, this post will become invisible to the public and only accessible to Hana Belay.

Thanks for keeping DEV Community 👩‍💻👨‍💻 safe. Here is what you can do to flag documatic:

Unflagging documatic will restore default visibility to their posts.