In this chapter, we will look at the memory management of the V8 Engine for ECMAScript and WebAssembly, used by runtimes like NodeJS, Deno & Electron and web browsers like Chrome, Chromium, Brave, Opera, and Microsoft Edge. Since JavaScript is an interpreted language, it needs an engine to interpret and execute code. The V8 engine interprets JavaScript and compiles it down to native machine code. V8 is written in C++ and can be embedded in any C++ application.

First, let us see what the memory structure of the V8 engine is. Since JavaScript is single-threaded V8 also uses a single process per JavaScript context and hence if you use service workers it will spawn a new V8 process per worker. A running program is always represented by some allocated memory in the V8 process and this is called Resident Set. This is further divided into different segments as below: 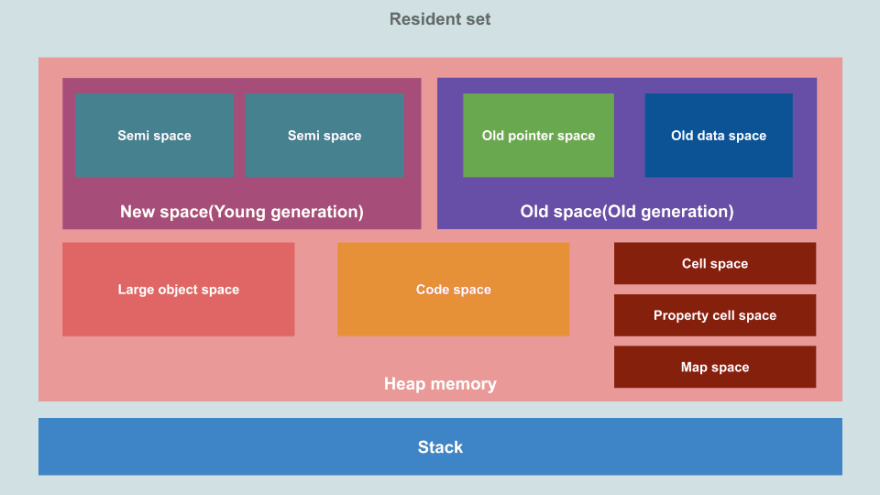 This is slightly similar to the JVM memory structure we saw in the previous chapter. Let us see what the different segments are for:

This is where V8 stores objects or dynamic data. This is the biggest block of memory area and this is where Garbage Collection(GC) takes place. The entire heap memory is not garbage collected, only the Young and Old space is managed by garbage collection. Heap is further divided into below:

Each of these spaces is composed of a set of pages. A Page is a contiguous chunk of memory allocated from the operating system with mmap (or [MapViewOfFile](https://docs.microsoft.com/en-us/windows/win32/api/memoryapi/nf-memoryapi-mapviewoffile) on Windows). Each page is 1MB in size, except for Large object space.

This is the stack memory area and there is one stack per V8 process. This is where static data including method/function frames, primitive values, and pointers to objects are stored. The stack memory limit can be set using the --stack_size V8 flag.

Now that we are clear about how memory is organized let's see how the most important parts of it are used when a program is executed.

Let's use the below JavaScript program, the code is not optimized for correctness hence ignore issues like unnecessary intermediatory variables and such, the focus is to visualize stack and heap memory usage.

Click on the slides and move forward/backward using arrow keys to see how the above program is executed and how the stack and heap memory is used:

The Stack as you can see is automatically managed and is done so by the operating system rather than V8 itself. Hence we do not have to worry much about the Stack. The Heap, on the other hand, is not automatically managed by the OS and since it's the biggest memory space and holds dynamic data, it could grow exponentially causing our program to run out of memory over time. It also becomes fragmented over time slowing down applications. This is where garbage collection comes in.

Distinguishing pointers and data on the heap is important for garbage collection and V8 uses the "Tagged pointers" approach for this - in this approach, it reserves a bit at the end of each word to indicate whether it is pointer or data. This approach requires limited compiler support, but it's simple to implement while being fairly efficient.

Now that we know how V8 allocates memory, let us see how it automatically manages the Heap memory which is very important for the performance of an application. When a program tries to allocate more memory on the Heap than that is freely available(depending on the V8 flags set) we encounter out of memory errors. An incorrectly managed heap could also cause a memory leak.

V8 manages the heap memory by garbage collection. In simple terms, it frees the memory used by orphan objects, i.e, objects that are no longer referenced from the Stack directly or indirectly(via a reference in another object) to make space for new object creation.

Orinoco is the codename of the V8 GC project to make use of parallel, incremental and concurrent techniques for garbage collection, to free the main thread.

The garbage collector in V8 is responsible for reclaiming the unused memory for reuse by the V8 process.

V8 garbage collectors are generational(Objects in Heap are grouped by their age and cleared at different stages). There are two stages and three different algorithms used for garbage collection by V8:

This type of GC keeps the young or new generation space compact and clean. Objects are allocated in new-space, which is fairly small (between 1 and 8 MB, depending on behavior heuristics). Allocation in "new space" is very cheap: there is an allocation pointer which we increment whenever we want to reserve space for a new object. When the allocation pointer reaches the end of the new space, a minor GC is triggered. This process is also called Scavenger and it implements Cheney's algorithm. It occurs frequently and uses parallel helper threads and is very fast.

Let us look at the minor GC process:

The new space is divided into two equal-sized semi-spaces: to-space and from-space. Most allocations are made in from-space (except certain kinds of objects, such as executable Codes which are always allocated in old-space). When from-space fills up the minor GC is triggered.

Click on the slides and move forward/backward using arrow keys to see the process:

So we saw how minor GC reclaims space from the young generation and keeps it compact. It is a stop-the-world process but it's so fast and efficient that it is negligible most of the time. Since this process doesn't scan objects in the "old space" for any reference in the "new space" it uses a register of all pointers from old space to new space. This is recorded to the store buffer by a process called write barriers.

This type of GC keeps the old generation space compact and clean. This is triggered when V8 decides there is not enough old space, based on a dynamically computed limit, as it gets filled up from minor GC cycles.

The Scavenger algorithm is perfect for small data size but is impractical for large heap, as the old space, as it has memory overhead and hence major GC is done using the Mark-Sweep-Compact algorithm. It uses a tri-color(white-grey-black) marking system. Hence major GC is a three-step process and the third step is executed depending on a fragmentation heuristic.

This type of GC is also referred to as stop-the-world GC as they introduce pause-times in the process while performing GC. To avoid this V8 uses techniques like

Let us look at the major GC process:

This post should give you an overview of the V8 memory structure and memory management. This is not exhaustive, there are a lot more advanced concepts and you can learn about them from v8.dev. But for most JS/WebAssembly developers, this level of information would be sufficient and I hope it helps you write better code, considering these in mind, for more performant applications, and keeping these in mind would help you to avoid the next memory leak issue you might encounter otherwise.

I hope you had fun learning about the V8 internals, stay tuned for the next post in the series.