(Photo by Harley-Davidson on Unsplash)

In this seventh part we are going to see how to update to the new version of yew; then again we will how to write and use custom components using yewtil.
Then... No spoiler!

As I was explaining in the last tutorial, the latest versions of Yew, have modify a little the way we should writ our code, namely it became mandatory to explicitly use the fn change(), that we saw too in the last article, and explain, even when it should just return false.
Moreover, yewtil was purged of dead code and moved into Yew's workspace.

We will proceed with order to update the code we already have from the end of last tutorial.

The versions in crates.io are not fully updated, so here I'll opt for the latest available code in the Github repo:

You can see that yewtil points to the same repo as yew: this is because now they are in the same workspace. Beginners notice: this is a somewhat obscure and undocumented way of referring to the crate; I first encountered it using Diesel from git, and it was strange also for me that it should work this way, especially because it is undocumented: there are lots of docs about how to setup a workspace, but not many on how to use two crates from the same workspace, while using the git repo. So beware.

No changes have to be done. Yup, our code works fine through versions (it is also fairly simple).

This is THE change to be done: we have to add a fn change() if we want to correctly impl Component for our App struct, even though there are no Properties (our App, as the entry-point does not need any), so there is nothing to change. Well, we'll stub it out and simply return false:

Before all this was simply implied.

That's it, our app runs as expected!

Part 2: Improve some more with yewtil

An example should suffice, we shall change our trusty Button

We start with the imports:

Previously we were using Yew's prelude only to import Html, so now we dispensed with it, and are importing straight Html.

This is all that is needed! Let's proceed with order:

And it really is the end of it.

What is done under the hood is that a component is created, with a struct that matches our parameters, initialized exactly as a pure component; the fn view() of that struct will call the function we defined matching the correct parameters.

It is a really a useful ergonomics for simple presentational components.

As we can see, nothing really has changed. In this case, it is good news.

Let's bring back serde, and add the needed feature to yewtil

In fact, we need the fetch feature to fetch API data in an improved way.

While trying again to compile today this code, I discovered a bug introduced few hours ago in wasm-bindgen that clashes with gloo-events bringing down the whole dependency tree! It was introduced in the version 0.2.66 released yesterday!

Meanwhile Yew has updated to version 0.17.2, and while on the surface everything compiles fine, I haven't had yet the time to explore in depth all the changes.

After applying these change I suggest a cargo clean, followed by the usual ./run.sh, that will clean all, download all dependencies, and compile them again.

We add this new file src/api.rs. Let's go quickly over the use section:

We use serde, as well as some parts of the yewtil::fetch mod.

Next we need to replicate the data structures returned by our API. We'll use for this purpose the dummy API /employees endpoint, by restapiexample.com; so, we define it in a constant:

This is the result of that endpoint call:

Thus we need a struct to hold the JSON object wrapper, with the two fields, status and data, plus a struct to represent each employee record in the data array.

This covers the Employee records; notice that besides the usual derives, and the Serialize / Deserialize for serde, we have as well a not too common Default. Since we need to init the data structures easily with Default::default(), we need to make Rust to derive it for us. If the structures are more complex we explicitly need to impl a Default for our structs in order to init them more easily.

The wrapping structure is easy as well:

Notice how we derived again the Default.

We made both struct completely pub, because we need to import them for use in other parts of our project.

Lots of lines, but the code is very simple to understand.

Next we define the needed 4 functions:

We covered all needed in the API fetch part; we will see now how to handle the fetch states and we will create a component in order to take advantage of the API.

Since we will implement a custom component, called Employees to display the results of the API call, we need to declare its containing .rs file in the components/mod.rs, in order to use it as a mod:

Since there will be just a small addition, we will do it right away: we will add our custom component:

This is to use it.

And this is to use it in the interface. Yes, we just simply added the component <Employees />

Now, for the meatiest part:

It is quite some stuff. Let's proceed with order:

Next we define the struct for our component

We have the usual ComponentLink (to which it is magically added the send_future method, just by importing the future::LinkFuture of yewtil). We also have a Fetch that we aptly called api, to which we passed the data to be mapped, ApiResponse, and Request, our implementation of FetchRequest.

We will use a two messages system, as we did previously in the regular API polling:

The Msg::SetApiFetchState will be set with the appropriate FetchAction state, according to the state of the transaction (do you remember the web API calling model?); the GetApi of course is the one that will initiate all, maybe to be attached to a button that the user can press to explicitly send the request.

Now we need to impl the Component trait for our Employees, as usual, to make it into a custom component:

As you can see, in the init of the api we use the std::Default::default(), that is why we needed Derive it in the data structures of api.rs .

Nothing new nor difficult in the type declarations and vreate function. Notice, though, that we do not need props, just as we do with App, because the state will be internally managed by the component, as if it were a totally independent unit.

The update function will handle the Msg's:

Just for reference, these are the 4 possible state of the Fetch:

To them, there corresponds a FetchState, thus

As already explained, we need to implement the change function, even though we do not have props passed by the parent, so it is a simple ShouldRender=false

Next we will analyze the view function:

The biggest part of the code is taken by a closure that displays the record data present in the response. We will proceed with order:

The function contains a single match over self.api.as_ref().state() that gets the state of the api. We will analyze the 4 state matched:

Time to run our app:

Now we have a button to start fetching.

This is the message that appears while fetching. 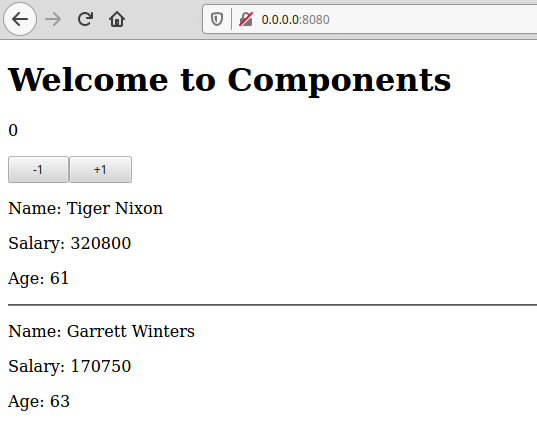 This the result of our fetching.

I created an error by disconnecting the Internet, so I got an error Could not create a fetch future.

We covered more stuff than I had originally had planned to do, so this seventh installment really had to be added to cover the new yewtil interface. I had planned to cover some practical example, but I have to postpone it to the following tutorial. So stay excited: we'll finally cover practical applications starting from next article!

What, Why and How Javascript Static Initialization Blocks?