Cover photo by Daria Nepriakhina on Unsplash; the banana, after Cattelan's exposition, is coming to signify the message of deceptive simplicity.

In this second part we are going to do some extensions/improvements,
and hopefully show a little more of the potential
of Yew framework

In this article we will be tinkering around, in order to understand better the concepts
at work in Yew. We will do also some project related stuff, which is more general or more front-end specific, and less related with Yew. Let's go!

Let's script our way through the boring stuff

But first a little improvement that will help us a lot.
Let's create a file called run.sh

This script's' purpose is simple: automate the build and run of this project.

At the top of the script we have the shebang, #!/bin/sh,that tell the console interpreter which environment use.
Of course, sh is not bash, but as long as you are posix compliant in your scripts, it doesn't matter. I personally use zsh with the fabulous Oh My Zsh!, but these are personal preferences. Back to work, now.

We divided the actions to be done in 3 functions that we call at the end.
It is important to be modular, because in this way we can modify independently each one of the functions.

The run function deserves special attention. We are not simply calling the server, we are making it work in background (the & appended to the command). For this reason we are saving the process' PID and storing it in a hidden file, .serverpid

Quick troubleshooting: if you have both python2 and python3 installed on your system, and the script is not working, saying it can't recognize the http module

Now that it is done, let's make it executable.

Finally we can execute it easily with:

Yatta! All working well. But if we wish to stop the server? We need to look at the process' pid we stored earlier

Now we'd better make an automated script to do just that-

The script is modular as well, maybe its overkill, but better be prepared for more.

Now we have two scripts to help us going on with the project (remember to make stop.sh executable!)

After this detour we can go on with the Yew tutorial.
Without further ado, let's thinker around with the code inside our src/app.rs

First of all, let's add a new message, let's say, to decrease the counter.

Now we need to take care of handling the logic of this new message:

Quite simply, we added a match branch and we did something with that message.

It is now time to add a button to the DOM, in order to send this new message.

This too is quite self-explanatory. Let's check it out starting the server.

Well good. We can even go negative if we want. What about implementing the logic to avoid negative numbers, but stop to 0? Can you implement it? (My solution in code)

Part 2: What if we want to handle a list instead

What if we want the counter instead to be a list, and increase the elements of that list?
This is plain ol'Rust, let's do it!

First of all, let's modify counter to be a Vec<i64>. Actually, the name "counter does not make sense anymore, so let's rename the symbol too:

We need to update our component constructor as well, the create function:

Of course, we can't simply add to the a Vec, we need to update the update logic!
Well... What are we going to push inside of it? For now just a random number!

Wait! How do we add a random number?
We need first of all get into our dependencies the crate rand, which supports compiling to the WASM through getrandom

In Cargo.toml add to the [dependencies]:

To call the random() function, we have to use the preamble in src/app.rs

Then we can change the handling logic in update:

Why would we need to wrap the remove branch of the match in brackets? Remember that pop() returns an Option (the popped element or None), while push returns ().

Finally we have to display our trusty vec:

A vector does not implement Display, so we take advantage of the debug formatting.
In fact, all handy tools are still available to us:
Rust's still Rust even compiled to WASM.

We can now run and check the results. 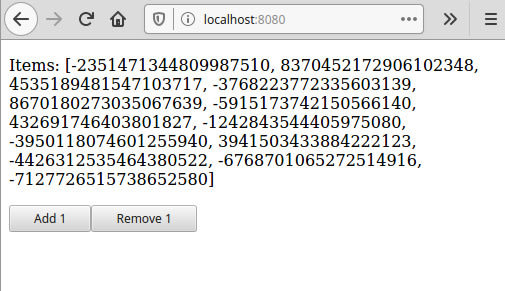 Well, I added some random items.

OK, but should we not do something useful instead of just Rusting around?
Hold your horses cowboy, we first need some more understanding of how to work in Rust with WASM, and the Yew framework.

Rust's format! is great and all, but sure displaying a vec in debug mode is not that great frontend practice, is it?

Let's remedy to that, by changing our view

Whaaat? Stop the world it's spinning too fast!

We are using a CSS framework here, picnic, and we are using a recursion over the vector in order to create rows of a table.

Lets go in order.
We added a lot of HTML tags and CSS classes, but really what has changed is just the following:

This notation starting with a for iterates over the vec self.items and maps the results to a closure, render_item.

Let's see what this closure does, then.

Fragments are a couple of empty tags <> and </>. This is the way Yew has to nest code for html! inside another. Since this macro can have just one starting point in the DOM, fragments manage the nesting for us.

For the rest, there is really no other new thing, except for a lot of new HTML and CSS classes. And a little caveat:

This fragment between the two buttons is really important, in order to let Yew play nice with picnic buttons.

Before running the project we have to remember to update the index.html as well, in order to call picnic, otherwise there is no point in all those CSS classes.

I added 2 styles as well, just to show that you can still integrate Yew with all the usual styling methods.

Finally, we have also to increase the recursion limit if we want our html! macro to compile.
In fact, in order to put more elements in the html! macro the default limit is too tight.

We can run and see the rewards of our efforts! 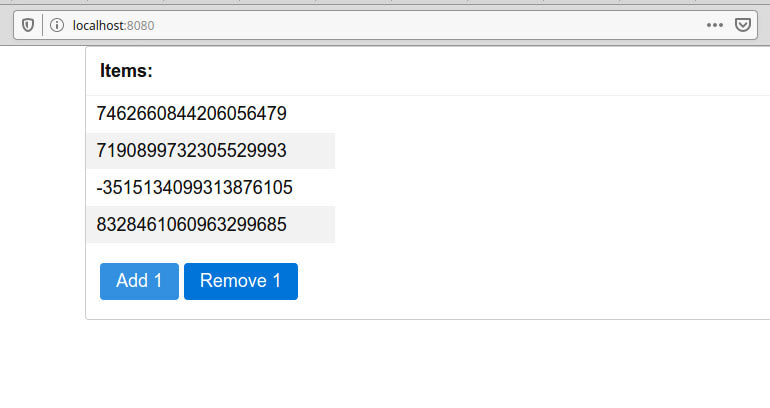 We will continue in the next installment of this tutorial talking about services.

STM32F4 Embedded Rust at the HAL: The RTIC Framework