The first installment of this series we just built a phony Python app and deployed it to DO App Platform.

Today we will lay the foundations of what is to follow.

As the man-month story teaches, I had some time (Christmas Holidays), and we have a project to develop. I needed a plan!
This is what happened, faithfully reported... more or less!

This was what I thought:

Well... we do not know as yet what we are building at the end, leave alone a plan!

OK, the project sounds like this: we will create a bot (in this case a Twitter Bot to keep focused just on one platform, but we could port it as well). This bot is Geography oriented, that is, it should produce maps.

The basic functioning is this: you mention the bot in Twitter, and the bot answers your tweet with a tweet of an image containing the map.

The basics is this, we can extend it at will (and we WILL).

As for the plan (roughly):

We will use an incremental functions development methodology, such as that from today onward we will have always a usable server and a usable BOT at least, adding functionalities as we go.

It doesn't matter that we do not show images as yet, but it is important that we keep paired the server-BOT interface.

As per the above, we have a server that shows us a message: we need a BOT that does the same.

Let's create a new repo for this, with the usual:

We will use tweepy for this project. First let's activate, then we install all that is needed

Tweepy uses OAuth to authenticate to Twitter. You need up to 4 keys in order to use it. Time to get those!

To create a new twitter app for your bot, go to the twitter developer page and Apply (top right).

Then, I chose in the welcome page the hobbyist reason that... I'm building a bot!

OK, kidding, just select the country, and other options (if applicable). Next it will ask you to explain what you need the account for.

Go ahead and write your reasons!
Mine were kind of: "Create a useful geography bot" (okay, maybe I spent some few additional words for the concept to be accepted, at least 200 char!).

OK, go ahead and answer all questions. Switch off those that do not apply (such as showing tweets outside Twitter & the sharing with government entities... unless you are from the Gov, following this: in that case, I declare I have nothing to do with everything is written in this post series!!!)

After this you have to review, and to accept the agreement and submit.

At the end you should get an email confirmation to activate the developer's account.

When you do, you'll be redirected to the app creation page: 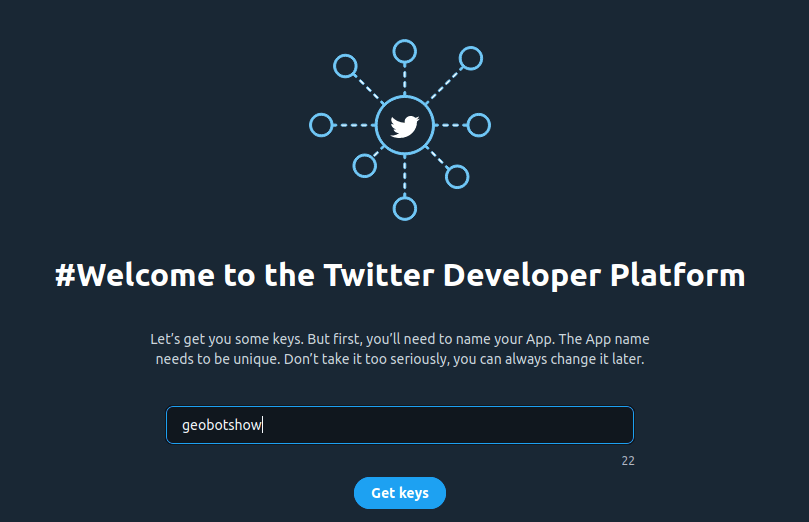 Now thou can finally Get the Keys Yeahhh!

Now you have to copy them. I suggest you create a .env file in your project, with the following:

The bearer token is better saved somewhere, even though we are not going to use it.

If you copied the .gitignore as I showed in the first tutorial, it is already ignored by git, otherwise you should add .env to your .gitignore

Now go to the app page, and edit the "App Permissions" 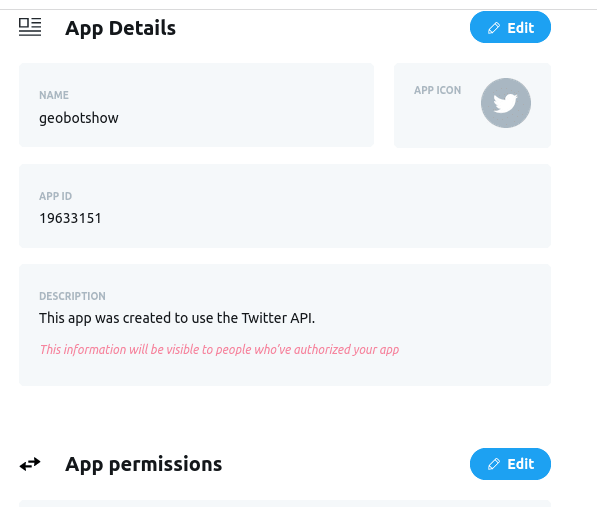 Set it to both Read&Write. Then save.

We need to go to the app Keys and tokens

At the bottom, we need to generate the Access token & secret.

Now we can update our .env with 2 new fields:

Finally we need these variables available in the virtual environment.

We first deactivate the environment (if active), then append the load commands to the activate file itself

You should get your API KEY printed out

We should check that everything is going well.
On the terminal get a Python shell:

Now we can import Tweepy and test the access:

In the above, substitute the key names with the actual values (or import them from the .env).

Basically we first create a authorization object, then we set for it the access tokens.

We pass the keys to an API object, and then we use the verify_credentials() method to verify that it is working as expected.

You should see the terminal flooded with info, and that means that it is working. Towards the beginning you should get info on the real name and the screen name, but if you do not spot them among all the rest, try the following:

Substitute in the above your twitter handle inside api.get_user(), and you should see the correct info printed.

Now you can quit() the Python shell (just write that function name and press enter).

We Can Implement the BOT Now

Now we will put it to use inside a bot called tweet.bot.py:

As you can infer from the above, we need two additional env variables,

The first holds the URL of your service, to retrieve the data from (you can check that easily underneath the name of your DO App Service).

The second holds a sort of pagination of the tweets id, so that it keeps track of what it has already answered to, in order not to start always to answer from the beginning. We start with 1, and it will get automatically updated. Also check on it, since it goes on the logs: this way if the app crashes, or gets updated, we can resume from the last one, and not start back from the beginning

We can tweet something mentioning our bot, in order to test if it works

And after a while we should see in the console the logging of the action:

And it should show also in your timeline

I suggest to save the Since_id and to substitute to the script's own one, so that each time it starts again the script will not attempt to answer to old mentions-

I suggest also to cancel some of the logger.info(), since in production we will not need them. Moreover, we need to log on a file with:

That should be enough for the following.

When we are satisfied that everything works correctly, we can deploy it to DO App Platform

In order to deploy, we need to go to the main page of our app and select the Components tab:

We need to Create a New Component, and we select Worker

You need again to select the repository (if it does not show, just refresh the permissions, clicking on the link below the repository selection dropdown: change it, change it back and save)

Then you'll pick again the branch and the region of deploy.

After this, it will have detected a python service, but will be unable to detect the running command: just edit the run command as before:

Moreover, we will need to insert the ENVIRONMENT variables!

As there is not a way to load a file, we have to add them manually

Make sure to select [x] Encrypt where appropriate, so that it will add a security layer.

It is time to select a plan, and again we can select the smallest size.

Then we have to wait for the deploy

Now, we can try it online and see everything running smooth 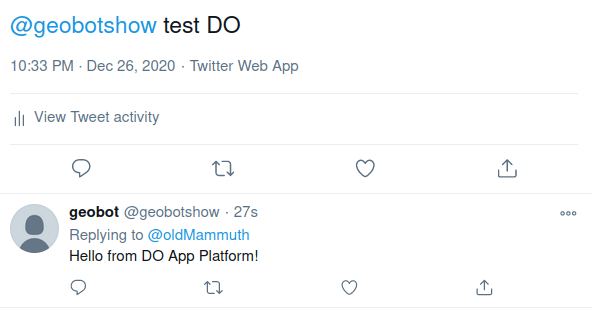 We can also check the log file in the console

We have set up a worker to run as a bot

The only problem we have with this configuration is that it will occupy two DigitalOcean Containers: one for the service, and one for the worker.

However, this configuration is quite flexible.

Stay tuned for the following episodes.

All You should know about HTTP Host Header Injection

Implementing OAuth on Flutter with Appwrite