Missingno is the patron Pokemon of data science. You’re just casually
surfing up and down your data, doing some sweet coding, when suddenly a
bunch of missing and corrupted data gets in you way, and you suddenly
have a bunch of random items in your bag for no reason. OK, well maybe I
just have a messy bag.

The valuable part of this metaphor is the part where you battle
Missingno, and win. I’ve been doing this with my Pokedex project
recently, to try and iron out what data I can rely on from my data
source, and what’s a bit patchy.

Skimr gives us a text based summary view. As well as the basics on data
set size, it also shows us some statistical values, but most valuably it
describes how many values are missing, and in what columns.

I was expecting some missing data in type_2, and
evolves_from_species_id, but I wasn’t expecting only half of habitat
to be there. Either I broke something in my data pipeline, or the data
wasn’t there to begin with. colour, shape, generation_id and
evolution_chain_id are all missing 20 entries each, which is a bit or
a coincidence. I wonder if they are all missing from the same Pokemon?

visdat is a package that helps you visualise missing data and data
types. 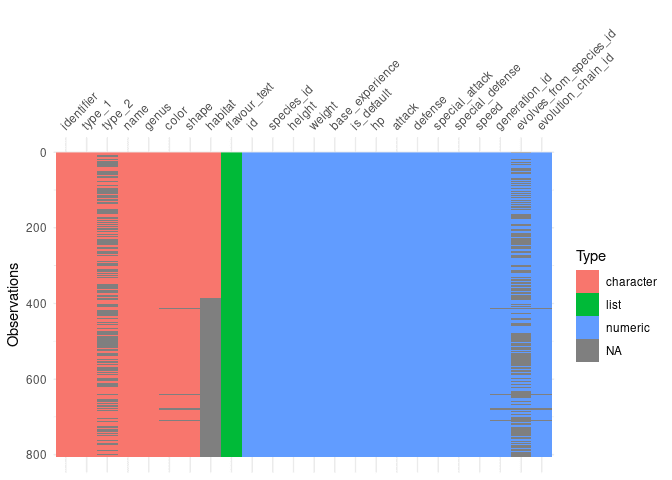 This clearly shows us the data types in each column, and where values
are missing in context. It looks like habitat might just not be
available after a certain time. It also looks like colour, shape,
generation_id and evolution_chain_id looks like they are maybe all
missing from the same individual Pokemon?

Naniar helps us check through plots where relationships between
missing values and other variables might occur. Lets check first if
there is a relationship between generation_id and evolution_chain_id 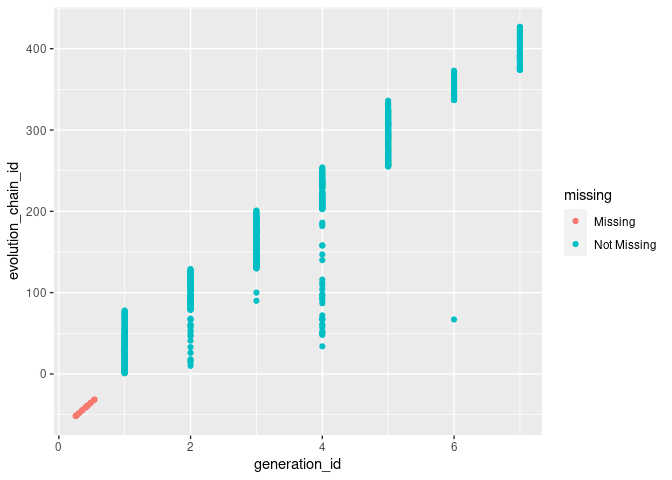 This plot might need a little explanation. For the Not Missing blue
values, this is a normal geom_point(). However, where the values are
marked as Missing pink they are deliberately moved below the (0,0)
mark for the axis they are missing values for, then they ‘jitter’, to
avoid over-plotting. The little cluster at the far bottom left in a line
marks that for all values where evolution_chain_id being missing,
generation_id is also missing. Let’s have a look at the
evolves_from_species_id variable just to help us understand. 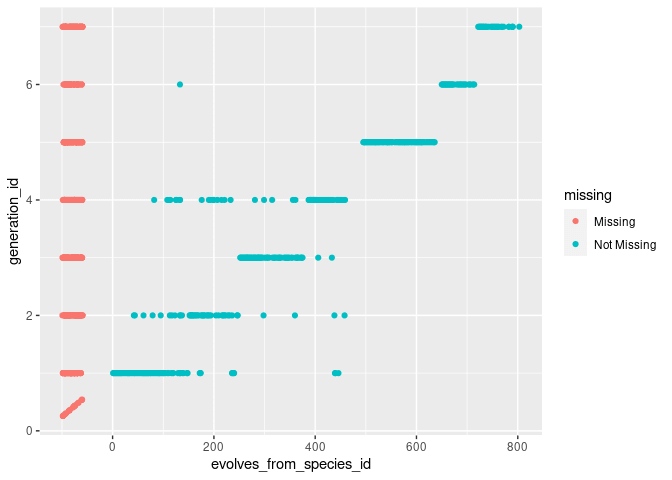 Who is that Pokemon?

Now we know the characteristics of the missing data we are interested
in, we can pull them out easily. Especially with the newly released
across() function

So it looks like in the current version of the package, these Pokemon
all have ‘complex’ identifiers. This is because these Pokemon all have
different forms. Some vary by colour like
Basculin
which can be Red or Blue striped, others have ability transformations,
like
Aegislash
or which game it was caught in like
Deoxys.

If we go back to the raw source data, we can see that the data is
actually there for most cases, it just didn’t join properly because in
the source data, they are identified by the simple name, in lower case,
and in this version of the
package
this data is joined on id AND the column that actually has the complex
name. Also, because shape and color link through this data, they are
missed as well!

This is all based on my Pokedex R data package, which I’m just about to
fix :)

an R data package for pokemon

What I learned this Week. Week 7.

How to construct frequency polygon graph in R programming.

A Visualizer for PyTorch Image Transformations

Dave Parr
Data-scientist who loves to use #datascienceforgood, especially in ecology, energy and the environment. Bonsai, gardening, bikes and music when I'm not at a keyboard.
My GitHub profile shows my popular dev.to posts and GitHub repos automatically
#github #rstats #showdev #r
How to calculate a Pokemons 'power level' using kmeans
#rstats #datascience #videogame #pokemon
Why did I make this dev.to API wrapper?
#showdev #projectbenatar #meta #rstats

Once suspended, daveparr will not be able to comment or publish posts until their suspension is removed.

Once unsuspended, daveparr will be able to comment and publish posts again.

Once unpublished, all posts by daveparr will become hidden and only accessible to themselves.

If daveparr is not suspended, they can still re-publish their posts from their dashboard.

Once unpublished, this post will become invisible to the public and only accessible to Dave Parr.

Thanks for keeping DEV Community safe. Here is what you can do to flag daveparr:

Unflagging daveparr will restore default visibility to their posts.