Author:
Lisa Vaas
July 21, 2021 2:11 pm
In another vast software supply-chain attack, the password-stealer is filching credentials from Chrome on Windows systems via ChromePass.

A credentials-stealing code bomb that uses legitimate password-recovery tools in Google’s Chrome web browser was found lurking in the npm open-source code repository, waiting to be planted within the sprawling galaxy of apps that pull code from that source.

Researchers caught the malware filching credentials from Chrome on Windows systems. The password-stealer is multifunctional: It also listens for incoming commands from the attacker’s command-and-control (C2) server and can upload files, record from a victim’s screen and camera, and execute shell commands. 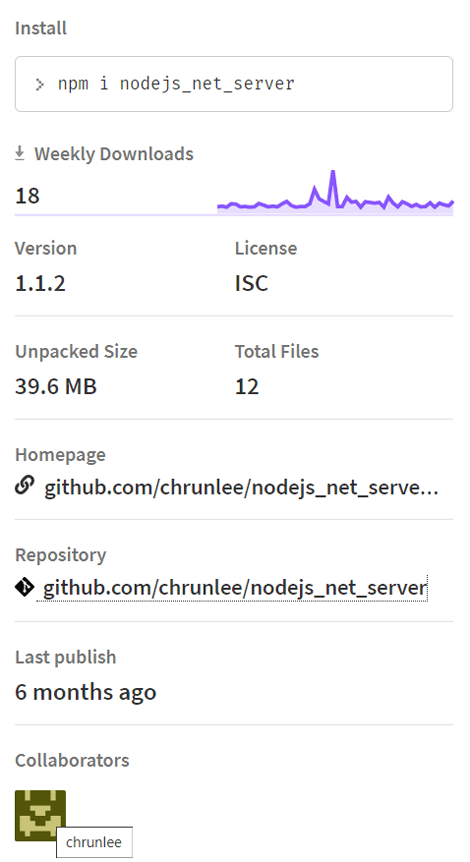 npm (originally short for Node Package Manager, or NPM) is the default package manager for the JavaScript runtime environment Node.js, which is built on Chrome’s V8 JavaScript engine. It’s similar to other code repositories such as GitHub, RubyGems and PyPI in that it’s part of a (very long) software supply chain.

“Vast” would be an understatement to describe the ecosystem: npm hosts more than 1.5 million unique packages, and serves up more than 1 billion requests for JavaScript packages per day, to around 11 million developers worldwide.

Abusing Google ChromePass Utility
Besides textual JavaScript files, npm also holds various types of executables, such as PE, ELF and Mach-O. ReversingLabs researchers, who published their findings in a Wednesday post, said that during an analysis of the code repository, they found an interesting embedded Windows executable file: a credential-stealing threat. Labeled “Win32.Infostealer.Heuristics”, it showed up in two packages: nodejs_net_server and temptesttempfile.

At least for now, the first, main threat is nodejs_net_server. Some details:

nodejs_net_server: A package with 12 published versions and a total of more than 1,300 downloads since it was first published in February 2019. It was last updated six months ago and was authored by somebody using the name “chrunlee”. According to ReversingLabs, chrunlee also seems to be an active developer on GitHub, where the developer is working on 61 repositories.

Using static analysis, researchers found the Win32.Infostealer.Heuristics file in several versions of the nodejs_net_server package. Its metadata showed that the file’s original name was “a.exe” and that it was located inside the “lib” folder. A single-letter filename with an extension like that raises a red flag to threat hunters, the researchers noted. Sure enough, a.exe turned out to be a utility called ChromePass: a legitimate tool used to recover passwords stored inside of a Chrome web browser.

chrunlee buffed up the nodejs_net_server package through 12 versions until finally upgrading it last December with a script to download the password-stealer, which the developer hosts on a personal website. It was subsequently tweaked to run TeamViewer.exe instead, “probably because the author didn’t want to have such an obvious connection between the malware and their website,” researchers theorized.

chrunlee published the first version “just to test the publishing process of an NPM package,” the analysts described. Three months later, the malware maker implemented remote shell functionality that was polished over several subsequent versions. Then, in April 2020, chrunlee made minor modifications to the shell functionality in versions 1.0.7 and 1.0.8. Finally, in December 2020, version 1.1.0 was updated with a script to download the password-stealing tool.

The Second Problem Package
temptesttempfile: over 800 total downloads. This one’s a bit of a head-scratcher, given that “homepage and GitHub repository links to this package lead to non-existing webpages,” the analysts observed.
One of chrunlee’s npm packages – tempdownloadtempfile – also has non-existing links. One of its files – file/test.js – implements the same remote shell functionality as the ones found in versions of the nodejs_net_server package, but this package doesn’t perform execution hijacking, and it lacks a persistence mechanism, making its purpose “a bit unclear,” ReversingLabs said.

Fun Developer F-Up
ReversingLabs analysts dug up a development “fun fact” when picking through nodejs_net_server code: Its author, chrunlee, not only authored a credential-stealer but also accidentally published their own, stored login credentials, cheek-to-jowl with the password grabber, opening the author themself up to attack.

“It appears that the published versions 1.1.1 and 1.1.2 from the npm repository include the results of testing the ChromePass tool on the author’s personal computer,” researchers observed. “These login credentials were stored in the ‘a.txt’ file located in the same folder as the password-recovery tool, named ‘a.exe’.”

Another fun fact: That text file has 282 login credentials captured from chrunlee’s browser, some of which may still be valid (ReversingLabs didn’t verify them). And, some of those credentials feature the lamest of lame passwords (“111,” for example) and user names (“admin,” anyone?). 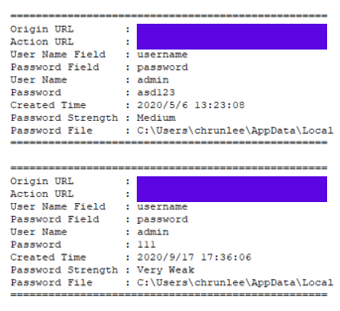 Some of the passwords that malware author chrunlee recovered from their own browser. Source: ReversingLabs.

“Just looking at some of the recovered credentials…shows that the author didn’t always care about best password policy practices,” the analysts gracefully understated.

UPDATE: Bad Packages Now Removed
ReversingLabs contacted the npm security team on July 2 to give them a heads-up about the nodejs_net_server and tempdownloadtempfile packages and circled back once again last week, on Thursday, since the team still hadn’t removed the packages from the repository.

When Threatpost reached out to npm Inc., which maintains the repository, a GitHub spokesperson sent this statement: “Both packages were removed following our investigation.”

Earlier npm Hijacks
This isn’t the first time that npm has been infiltrated by poisonous code. Earlier this year, three malicious software packages were published to npm; any applications corrupted by the code could steal tokens and other information from Discord users, researchers said.

A few months later, in November 2018, another malicious package was discovered: it was a dependency to version 3.3.6 of the popular package, “event-stream.” The malicious package, called “flatmap-stream,” contained an encrypted payload that was tailored to steal Bitcoins from the Copay application.

Repositories Are Increasingly Popular Targets
While the fact that this malware has been lingering on the npm registry for over three years is concerning, the fact is that, thankfully, those years have given antivirus engines a chance to catch up: VirusTotal shows that 46 security vendors have flagged the a.exe file as malicious. So noted Sonatype senior security researcher Ax Sharma, who told Threatpost on Wednesday that the Chrome password-stealing malware “further confirms how attacks on open source ecosystems are here to stay and can go undetected for years.”

It’s not just npm in cyberattacker crosshairs, mind you. Earlier this month, researchers stumbled on a group of cryptominers that infiltrated PyPI, aka the Python Package Index (PyPI), a repository of software code created in the Python programming language.

According to the report, the npm infiltration is just the latest example of how developers are putting too much trust in third-party code, reusing libraries to get fast, easy results and “rarely [making] in-depth security assessments before including them into their project.”

Granted, there’s a whole lot of code to suss out.

“This omission is a result of the overwhelming nature, and the vast quantity, of potential security issues found in third-party code,” according to ReversingLabs. “Hence in general, packages are quickly installed to validate whether they solve the problem and, if they don’t, move on to the alternative. This is a dangerous practice, and it can lead to incidental installation of malicious software.”

Sharma said that what’s of particular note about the discovery of a.exe is the fact that it employs a legitimate password-recovery Windows utility, ChromePass, to steal passwords from a user’s Chrome browser. “Threat actors often rely on legitimate components and services to conduct their sinister activities so as to evade detection,” he said via email.

In the report’s conclusion, ReversingLabs noted that software supply-chain attacks are becoming “a powerful strategy” for malicious actors, with developers being targeted as a critical entry point to their organization and its client base.

“One of the most frequent attack vectors targeting developers is exploitation of public package repositories,” the report warned. “As these repositories have a large number of hosted packages, they offer a good hiding place for malware to lurk in. Repetitive discovery of malicious packages in these repositories has proven that there is a growing need for security solutions that can provide reliable identification and protection against these types of attacks.”

The Power of Variable Names

Once suspended, dammyreginal will not be able to comment or publish posts until their suspension is removed.

Once unsuspended, dammyreginal will be able to comment and publish posts again.

Once unpublished, all posts by dammyreginal will become hidden and only accessible to themselves.

If dammyreginal is not suspended, they can still re-publish their posts from their dashboard.