In the previous article talking about d2i I had not mentioned the thought process on how I reversed the file and understood its structure. I thought this could interest a few people.

This is the thought process behind this previous article: http://medericburlet.com/dofus-d2i-reverse-engineering/

Having done some work in the emulation of the game Dofus as well as the bot side of it I knew that information such as weapon names, dialogues, maps, musics etc were stored in local files.

I knew that d2i files were the files responsible for the npc dialogues, thus I decided to try to understand them. You can follow this tutorial with the same file I used which can be found here: i18n_fr.d2i

Knowing we are working with a video game, the data must be stored in an easy way to read otherwise there would be no point having them locally. After all the principle of local game resources is to speedup loading times.

My first approach was to open the file in atom, maybe with a bit of luck it would be something readable like JSON. And it turns out part of the file was readable. Lucky us that meant that there was no encryption on the data.

However some of the lines were completely not readable.

My next step was opening it into a Hex editor since the jumbled text meant it wasn't meant to be a readable text format.

Upon opening the file into a Hex Editor something caught my eye straightaway!

There was a pattern at least a visible one! I did not know what it represented nor how to interpret it but at least there was hope.

We can clearly see some repetition on the right panel and if we look at the Hex data we can see a lot of the 2 bytes groups ending in 00 or 00001.

Making sense of the Hex data

The number seems very "lucky" as this could easily be 3, 2 bytes integer or 1, 4 byte integer and one 2 byte integer.

If we select all the bytes until we arrive the end of all the string listing we get the same number. So the first 4 bytes of a d2i file are representative of the size of the string data. 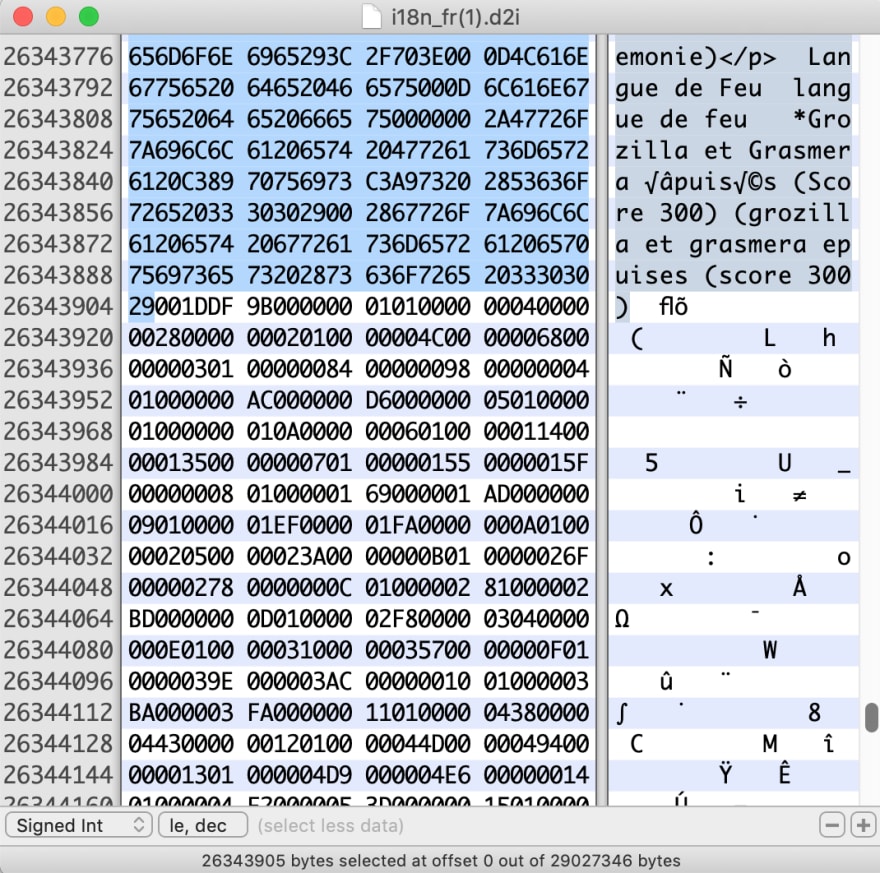 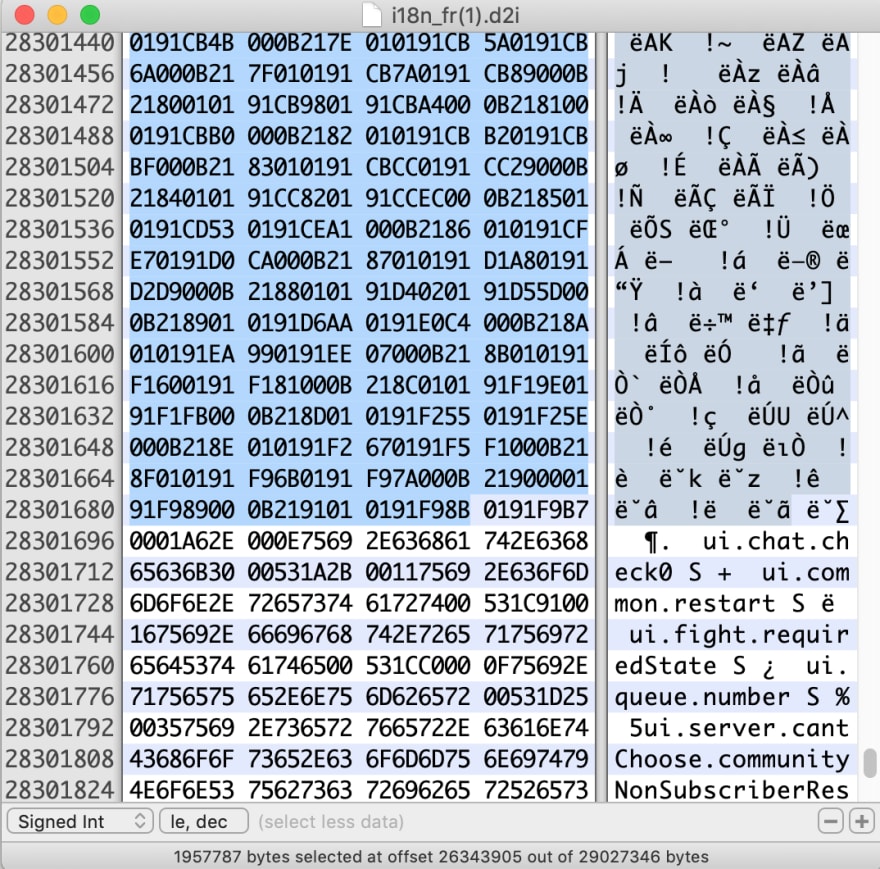 Yes now we are going to the boring or interesting stuff. If we go back to the end of our first string listing we notice a pattern in the hex data. The first 4 bytes group is such a perfect set: 00000001

If we look closer we see a pattern emerge: 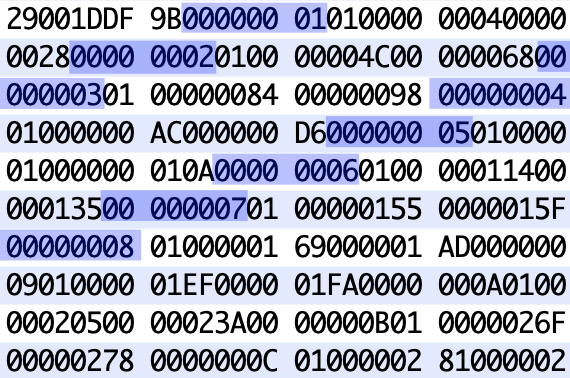 We see here that we have a value getting incremented same principle as an ID this would make sense since those files are data storage for the game.

From there I just followed my gut for ID 01 we get the number 4 which was the position of the first string in our file. The position is 4 if we count the first 4 bytes which are the size of the data. The second number 40 if we look at the 40th byte from the start we see its the same string as the first one but without capital letters or accents.

From this I deducted the following format which is explained in my previous blog post: http://medericburlet.com/dofus-d2i-reverse-engineering/

I then checked with the second ID see if it corresponded to the second string and it did. from there I wrote a simple parser which then became a fully fledged reader: https://github.com/crimson-med/FastD2IReader

This was a very fun and entertaining challenge which forced me to use logic as well as understanding my environment and following my gut. It was important to keep in mind that the file came from a game and thus reading time was as important as accessibility.

A Fast .d2i (D2I) Dofus file reader based from reverse engineering the file.

Having reversed engineered the .d2i files from Dofus for fun, I decided to make a simple reader for them.

RBAC, ABAC and CapBAC in IoT

Why you should not ask your developers to implement modern auth

Once suspended, crimsonmed will not be able to comment or publish posts until their suspension is removed.

Once unsuspended, crimsonmed will be able to comment and publish posts again.

Once unpublished, all posts by crimsonmed will become hidden and only accessible to themselves.

If crimsonmed is not suspended, they can still re-publish their posts from their dashboard.