Open edX is an open-source platform you can use to create and host online courses. It was originally developed in 2012 by MIT and Harvard University and has since been adopted by organizations of all shapes and sizes to power a wide range of online learning use cases.
It has been used by organizations and universities like Microsoft, IBM, MIT, and ASU.

How do we handle deployments by default in Open edX ?

We use Ansible to provision and maintain our platform. If you are not familiar with Ansible, it's an open source Devops tool that automates the software provisioning and configuration. It building blocks are:

What is the workflow to change a variable ?

We have our playbooks, roles and their variables in a GitHub repo. Variables are divided to 2 different files vars.yml and passwords.yml. Passwords file is encrypted using Ansible Vault.
To change a variable and deploy it to the Open edX server we need to:
1- Pull the Github repo that has Open edX variables on a local machone
2- Change one or multiple variables
3- Push the changes back to the Github repo
4- Deploy new variables to the server from an Ansible Control node. Here we pass new vars.yml and passwords.yml to ansible-playbook command, Something like: 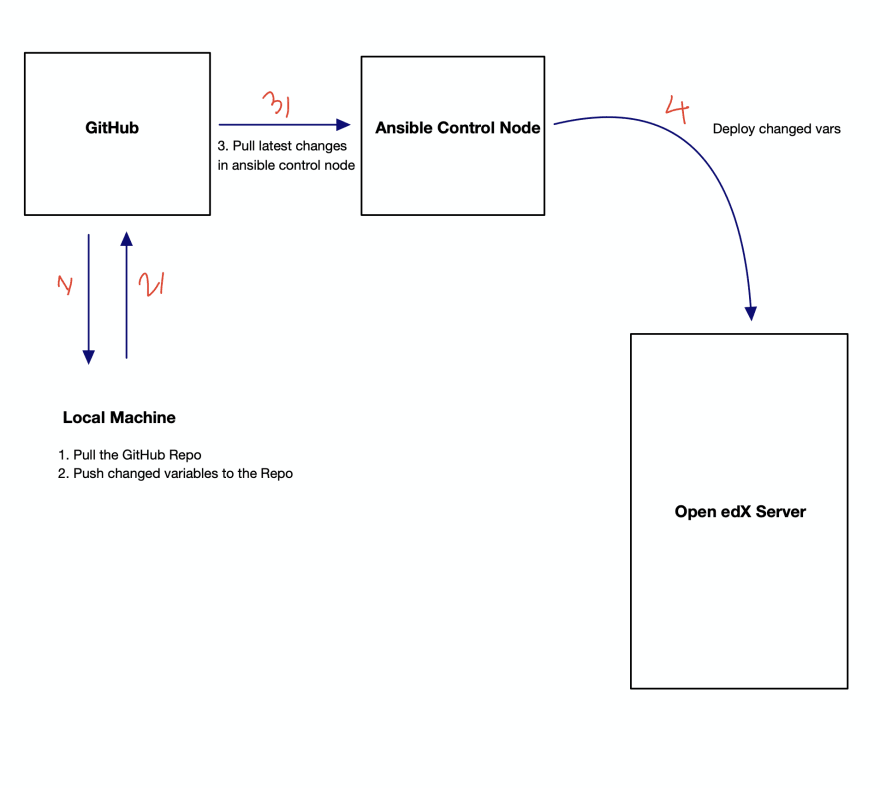 How GitHub actions can help to automate manual deployments

Problem
Steps 3 and 4 are where things can get complicated. As you see in the previous diagram these steps are manual and it can become really time consuming and tedious if you need to make multiple deployments to the same server or even to a cluster of servers.
Solution
Ideal solution will be to trigger new deployment to our server or servers as as soon as we push a new change to the GitHub repo. GitHub actions can do that for us. We can create a workflow that

Let's See how it works

One of the variables in the vars.yml file is EDXAPP_PLATFORM_NAME and we use it's value in template in multiple places like the footer.

Now let's change it's value to Cubite Technologies and commit the change. It should trigger GitHub action to deploy this new value to our server via Ansible.

To learn more about Open edX check their website

Python in the Browser

Cubite
Cubite is an education technology company that believes in the power of learning. Our mission is to create easy-to-use, adaptive software.
How To Manage Open edX Environment Variables Using Doppler and Automating The Deployment
#python #django #devops #security
How To Install Open edX with One-Click on DigitalOcean
#django #python #devops #cloud
How to install Open edx on Ubuntu 20.04
#ubuntu #aws #python #django