This month I built a smart mirror with my dad and daughter, making this a project that spanned across 3 generations. The idea started a few years ago with the novelty of a smart mirror. But before I was going invest the time and money to make one, I needed a practical reason to build one. Recently that reason presented itself. In our kitchen we have a whiteboard where we list out our dinner plans for the week and I wanted to upgrade it. On top of that, I submitted a presentation idea for the smart mirror at local tech conferences and my smart mirror presentation was selected. (Thus accelerating my timeline.) 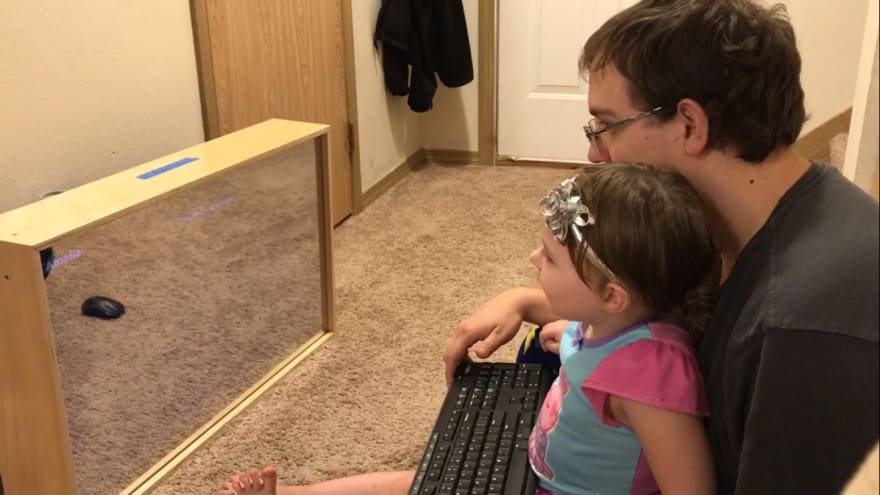 I knew I needed help with the design of the smart mirror frame since I live in the digital world designing software that lives in the cloud. But my dad is a Mechanical Engineer who lives in the physical world designing the planes we fly though the clouds everyday. While talking with my dad one evening, he suggested to create some initial sketches of the mirror. 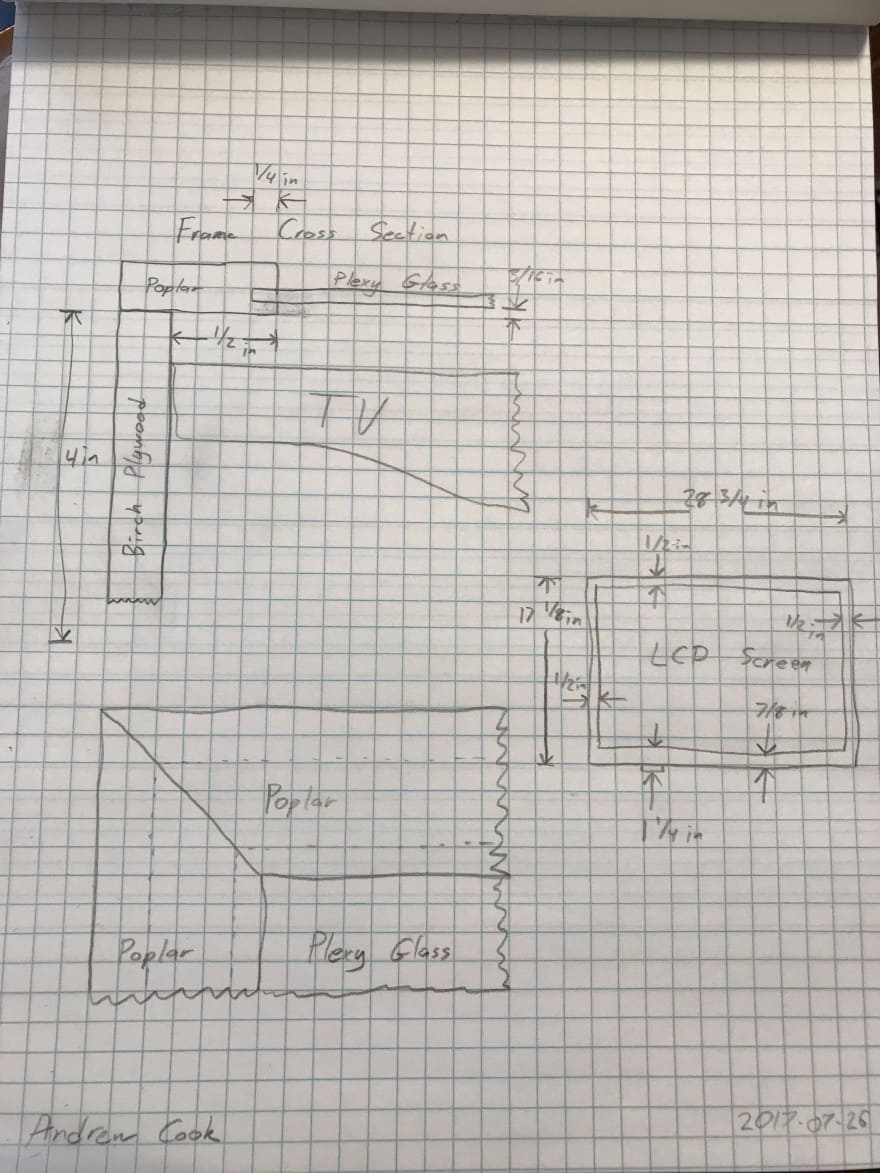 After a few more conversations with my dad and several design revisions, we settled on a simple box design for the frame. With my dad knowing more about woodworking than I did, he had a few suggestions for me. Like using cabinet draw sides for the sides of the frame as they already came with a groove to hold the glass. And using french cleats to secure the mirror to the wall, which also allowed it to be easily removed for transport. 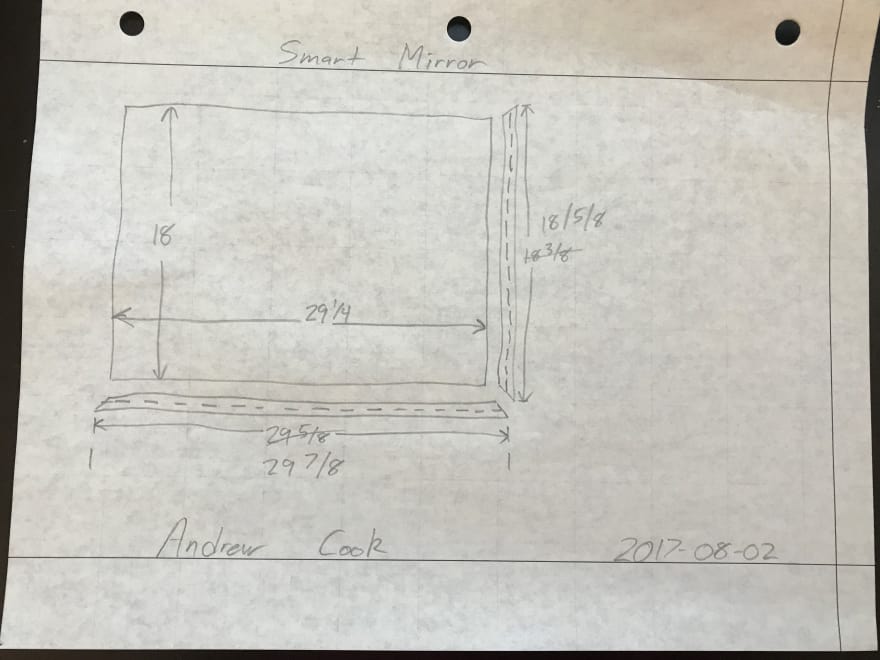 My wife was a huge support in this endeavor. She helped by sorting though dozens of TVs looking for the right price, features, and size that was large enough for our kitchen. But not too large to make transporting a hassle. Finally she was able to get a TV from Best Buy that had everything I was looking for. And the best part was that it was on sale.

The most noticeable part of the smart mirror is the reflective mirror. Most household mirrors are made from glass, but the biggest downside to using glass, is that it's fragile and doesn't transport well. I chose plastic as it's lighter, more transparent, and more durable. It's nice to talk to experts and I live in Seattle which has a great local plastic supplier. They were excellent and able to help me select the correct plastic. They suggested acrylic and we even tested the mirror film I had acquired on a sample they had. On top of all their help, this was not the first smart mirror they had supplied the plastic for so I knew I was on the right track.

The choice was simple when it came to deciding where to assemble the frame. My dad has a new workshop and all the tools we needed and I have a garage and a single toolbox. Once I had acquired the wood, acrylic, and mirror film, I went over to my dad's workshop to assemble the frame. What I thought would take 4-5 hours, took around 15 hours to assemble the mirror. But that may be due to refining the design as we were making the mirror. It may also be due to me asking a lot of questions, like why glue this vs. screw that. Or it was due to having a good time with my dad. Looking back it was a combination of all the above. Over 3 separate days, we cut, glued, nailed, and screwed the frame together to hold the TV, acrylic mirror, and Raspberry Pi.

Since several power tools were used, including a table saw, chop saw, and nail gun, my daughter didn't help with that part. But she was able to help with the final assembly when the acrylic mirror was inserted. She was even able to use the power drill to screw in the top during the final assembly. 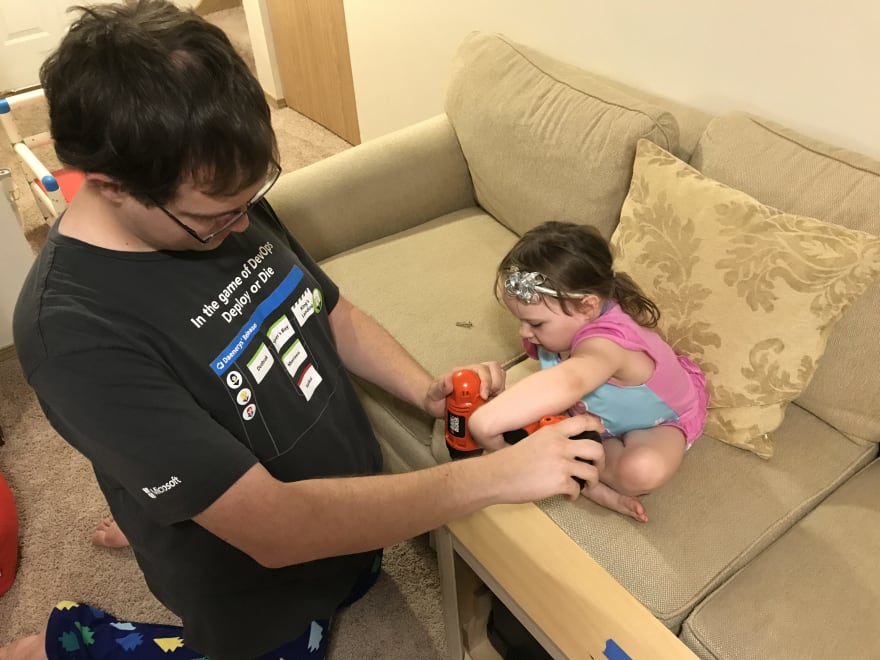 With all the woodworking completed, my daughter and I started wiring everything together. As pink is her favorite color, it was obvious that the only choice was to 3D print the Raspberry Pi case in pink. We put the Raspberry Pi into the pink case and attached it to the back of the TV via adhesive Velcro. By using Velcro, the Raspberry Pi can be disconnected. Thus I can show the size of the computer transforming the mirror into a smart mirror. 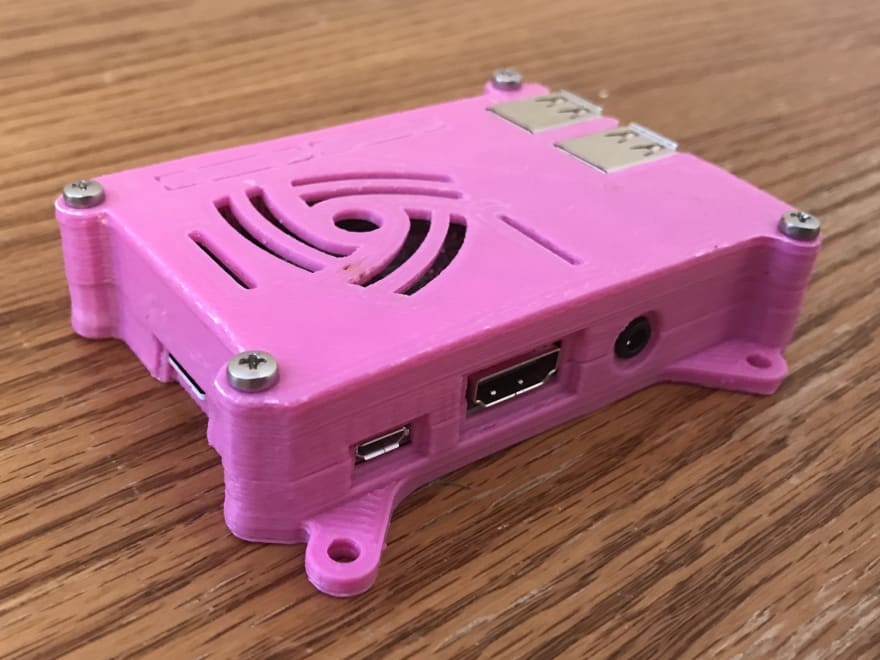 Modern TVs usually include a USB port, and the one my wife found did indeed have one. I tested it out the USP Port on the TV and it was able to supply enough power to the Raspberry Pi. This meant that the TV Power cord was the only cable I needed to plug into the wall outlet. Then we plugged the USB and HDMI cables into both the Raspberry Pi and TV and we were ready to go. With the on board WiFi I connected the smart mirror to the internet without any other wires. And when the power is out it will still work as a traditional non-smart mirror. 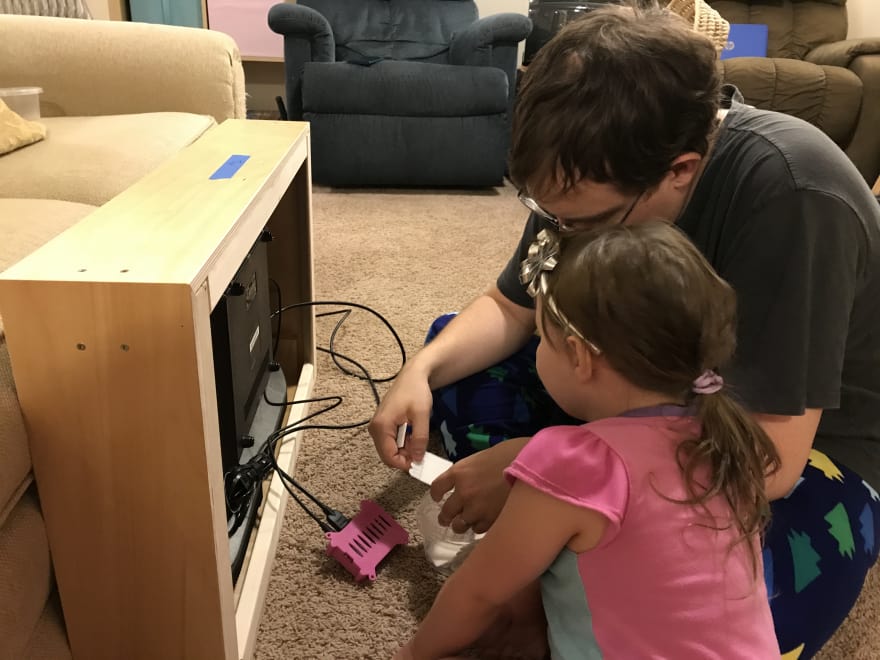 When you are 4, typing on a keyboard and coding are cool. (We'll see how she feels when she's 14.) My daughter got to help a lot on the software part of the smart mirror. Since her spelling abilities end with her name, she was able to type that and was very excited when she saw it on the smart mirror.

To get her name to appear, we used html. To keep it simple, a static html page with inline styling via Chrome (fullscreen F11) was all we had to do to get it working. When styling the html, the background needs to be as dark as possible to minimize the light coming though the mirror. When the screen is off or completely black it appears as a common mirror. The text and graphics need to be as bright as possible to show through, transforming it into a smart mirror. On my mirror I was able to find a film with 5% transparency. 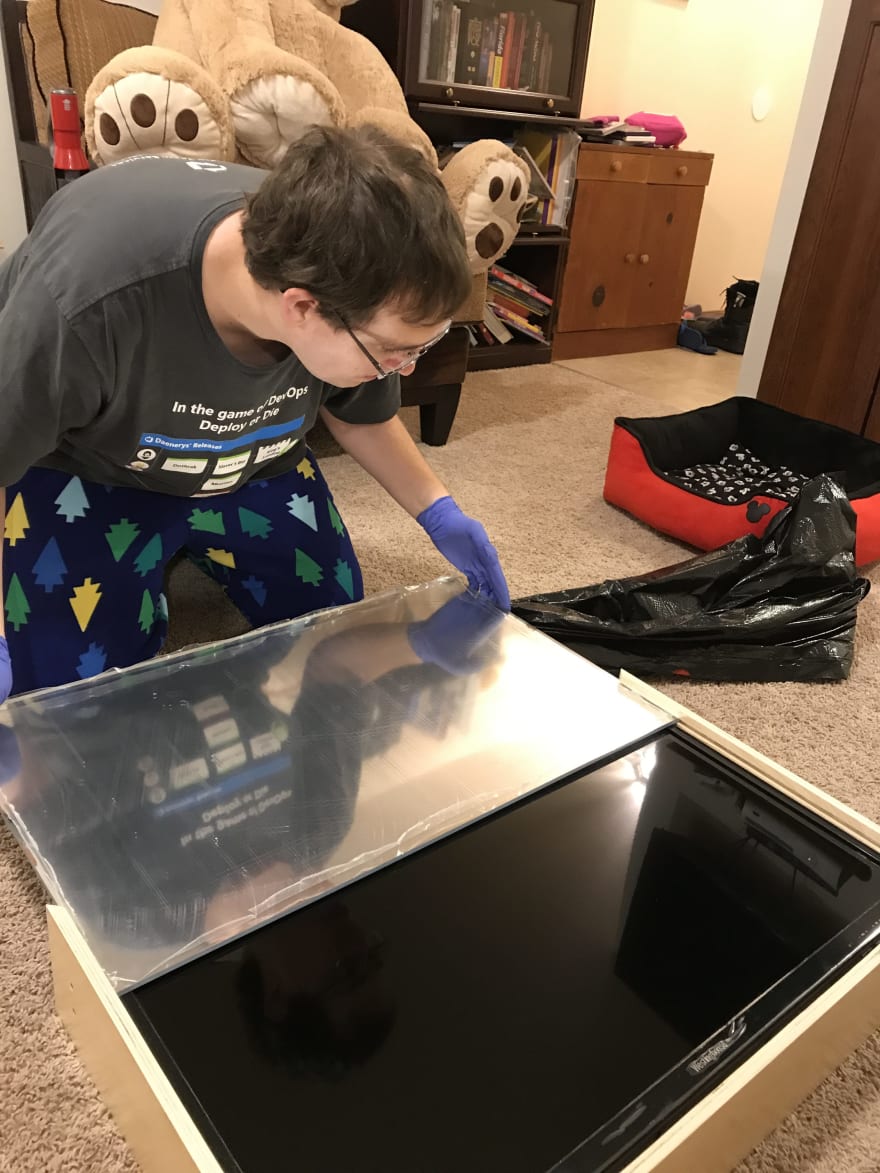 In reviewing my mirror thus far, I would do a few things differently next time. First, I would get a slimmer TV. Right now the mirror frame is 4.5 inches deep, which is deep enough that you notice, but not so deep that it's obtrusive.

Next, I would order acrylic with the mirror film already installed. My dad and I were able to install the film in 20 min, but this resulted in several small bubbles. Most likely due to a few small pieces of dust that were trapped between the film and acrylic.

Also, I would add a more stylized front. If you take a look at the corners of my smart mirror, you will see all the layers of plywood. This could be hidden with some nice wood to more resemble a picture frame.

Finally, I would add a small gap between the TV and acrylic. Currently, the acrylic is helping to support the TV. This is putting pressure on the acrylic causing it to bend slightly. This results in a slight distortion of the mirror.

Overall, building the Smart Mirror has been a great experience and if you have any questions please reach out.

Our next project, that my daughter and I are working on, is wiring up some sensors in the kitchen to track the temperature in the refrigerator and freezer. I'm hoping to get her more involved with this and future projects as she is excited to help and wire the sensors on a breadboard. I look forward to sharing that story with you once she and I have completed it. 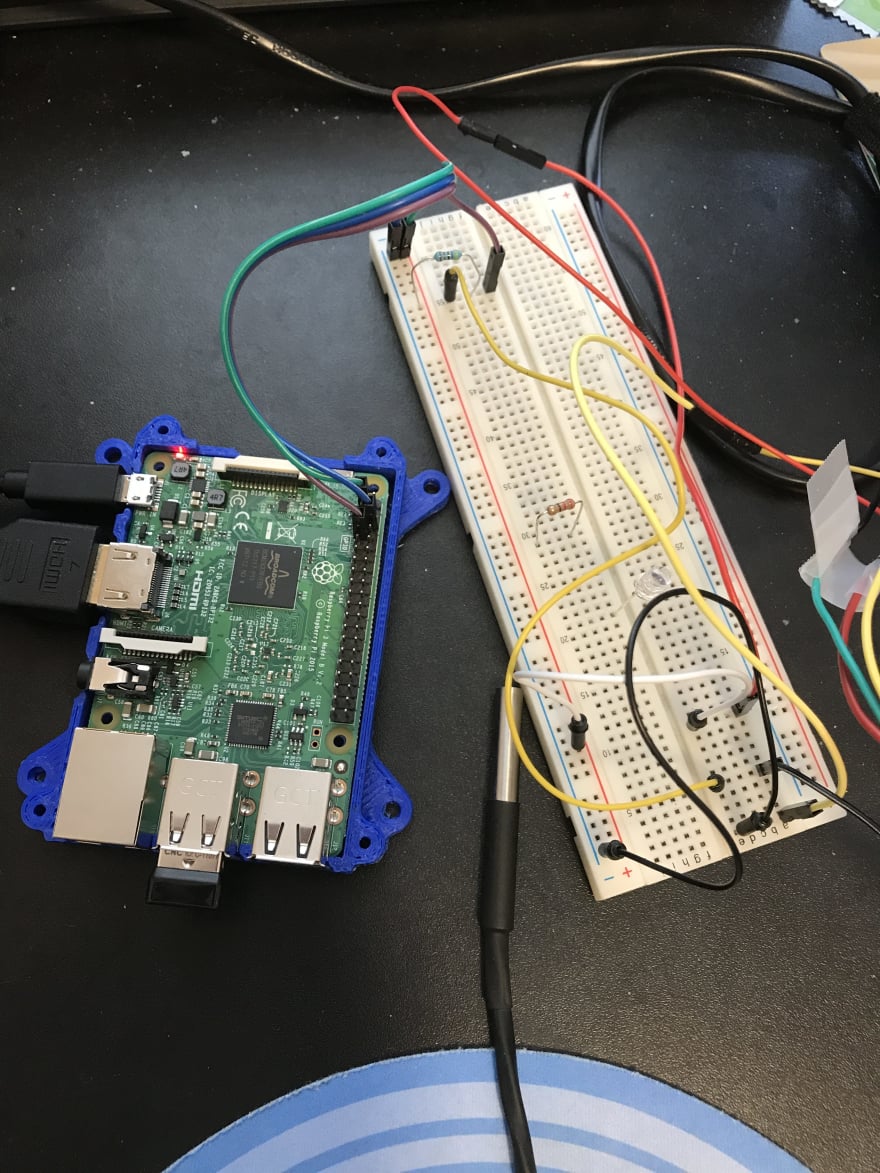 10 Great Laptops for Software Developers in 2021

Coding with Cookie
Andrew Cook is a software developer and Paramedic with years of experience in the Microsoft Stack including ASP.Net, MVC Framework, Microsoft Azure, Microsoft SQL Server, Redis Cache, and VSTS.
+20.000 Developers Rename the Wireless Mouse to Hamster - Help Us!🐹
#beginners #tutorial #programming #productivity
What Makes You Stay In A Community?
#discuss #community #watercooler
When can you declare yourself a Full-stack Dev?
#discuss

Once suspended, codingwcookie will not be able to comment or publish posts until their suspension is removed.

Once unsuspended, codingwcookie will be able to comment and publish posts again.

Once unpublished, all posts by codingwcookie will become hidden and only accessible to themselves.

If codingwcookie is not suspended, they can still re-publish their posts from their dashboard.

Once unpublished, this post will become invisible to the public and only accessible to Coding with Cookie.

Thanks for keeping DEV Community 👩‍💻👨‍💻 safe. Here is what you can do to flag codingwcookie:

Unflagging codingwcookie will restore default visibility to their posts.