In this introduction I'm going to skip ahead to the robots shooting lazers because life is too short. Don't be intimidated by the code below, if you stick around after the lazers I'll explain everything that's happening.

And that's all it took! We wrote some code and it made the robot shoot the lazers. If that's what you came for, now's the time to leave. But, if you're interested in adding reinforcement learning to your toolbox, I hope you'll read on. And now we'll get to the topic behind the topic...

I'm going to devote some time to writing about beginner/intermediate RL solutions starting with a framework called OpenAI Gym. OpenAI (and Gym) have been around for years as Elon Musk and Sam Altman's AI startup, but it has just now come out that OpenAI will colab with Microsoft's public cloud. OpenAI is still actively maintained and adding features at time of writing. In this introduction we're going to unpack basic concepts and explore the code you saw above line-by-line to help understand OpenAI Gym.

With that out of the way.... We're going to set aside the code you saw above for a little while and introduce core concepts at... 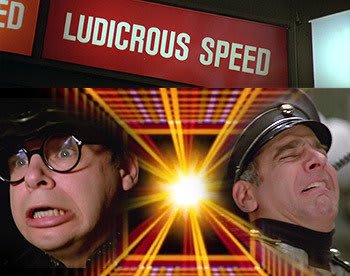 I've seen too many articles titled something like "Machine Learning vs AI What's the Difference and Don't You CARE?" Let's get through this in as few words as possible, and with some serious oversimplifiying.

Machine Learning/AI: The machine predicts something that it hasn't seen before using math or something. Wow! -- All the other categories are subsets of this.

Supervised Learning: We hide something (or multiple things) from the machine and ask it to predict what we hid. Because we have the hidden stuff, we know when the machine is wrong and use that information to improve the performance of the predictor by "training" it.

Unsupervised Learning: We have data, but we don't have the column that we would hide from the machine in the supvised learning category. Nonetheless we ask the machine to remark on the data. Often this involves sorting the data into "clusters."

Reinforcement Learning: We tell the machine "go drive a car lol." We give it a high-five and a reward if it doesn't crash (or whatever.) If it crashes we punish it somehow. It doesn't have to be a car: it could be a video game, or a robot, or an elastic compute instance on the public cloud, or a bunch of other things. The car is simulated -- maybe.

OpenAI gym is a framework for managing the interactions, outputs, and rendering for environments and agents. We'll start by creating an agent:

Our "random agent" takes a random action by sampling the action_space. For example, in a Nintendo game, the "action space" is basically just the collection of all buttons on the controller. I decided to standardize my agents to always have train, train_on_history and decision_function methods, but this agent never really trains since it always uses the same rule to make a decision.

This is a helper function that standardizes how we train agents. OpenAI is somewhat unopinionated about how you train agents so stuff like this is left up to us.

model: an instance of one of our agent classes.

steps: how many times the environment will run the step() method (we'll explore that soon).

episodes_per_train: how many steps between each call to train_on_history for the agent?

verbose: is checked before printing anything.

video_dir: is where the renderings are stored. Defaults to "gym_results"

After being called, our helper function starts with:

You might call this the entrance to the gym: this creates the environment instance that we'll use throughout the rest of the function. The next couple lines take care of video recording settings:

Then we do some initialization:

By convention, we reset the environment before taking any other action. I also want the history of our steps, but this can be cumbersome in some environments so we'll disable or parameterize that in the future. Finally, I want a count of our episodes, since each episode gets its own video and JSON file with a name derived from that number (among other things.)

This is the main flow of a step in gym.

In Space Invaders the observation is a numerical representation of a screen. In many RL use cases we're responsible for writing our own reward function to evaluate the actions of our models, but in OpenAI gym it's provided for us. The environment is "done" when we win or lose. Every full interaction with the environment is referred to as an "episode" so when we're "done" we move to the next episode.

All this happens while a handful of frames, or even just one frame, display in the video.

Next, I record a bunch of data about the step we just took. I'm skeptical that you would ever record all this, especially observation which is basically an image. In any case, this gives you an idea for how much information is available to you at each step.

Lastly, we have some special actions to take if we're done:

We optionally print, we optionally train, we increment the episode counter, and we reset the environment. This is very much like hitting the RESET button on an old console.

Once the loop is finished we close the environment and return all the data we collected. We can use that data for our video_rendering function, which is mainly just a bunch of I/O ops, parsing to a Jupyter-friendly object, and this important string manipulation:

And this is just to conform our filepath to OpenAI's naming convention for files, ensuring we find the right one.

In this introduction you saw robots shoot lazers at aliens. What more do you want? Okay, well you also:

Ikechukwu Unegbu: My Journey into Web and Software Development

A basic JavaScript course is NOT enough - Do these 5 things!