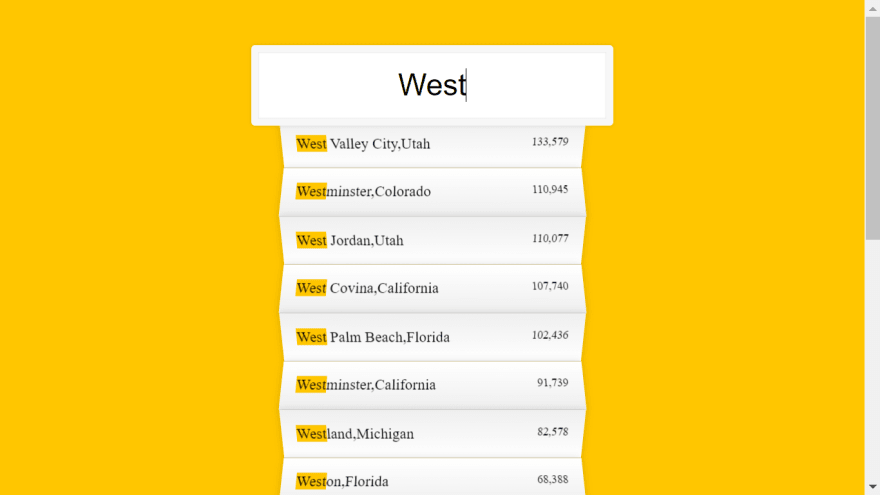 On DAY-6 we made a Type Ahead feature where we've got a list of names of cities and states with their population in it. When we type something into the box, it's going to show all matching results containing that word and the words will also be highlighted.

This lesson was really very interesting and I would definitely like to use this in my future projects. I learned a lot of new things so let's dive right into it.

So what we would be doing in this project is first we are going to fetch that data and then whenever someone types something we'll filter the array down to a subset of all the ones in which either the city/state names match.

Now we need to fetch our data for which we would be using fetch API.

The Fetch API provides an interface for fetching resources (including across the network). It will seem familiar to anyone who has used XMLHttpRequest, but the new API provides a more powerful and flexible feature set.

The fetch() method takes one mandatory argument, the path to the resource you want to fetch. It returns a Promise that resolves to the Response to that request — as soon as the server responds with headers — even if the server response is an HTTP error status.

In simple terms Wes mentioned that the data that comes back from our fetch, it doesn't know what kind of data it is just yet. Also since we know it's JSON a simple JSON.parse() wouldn't work.

So to convert the raw data into JSON we can see in the console the promise that is returned by fetch() contains a function .json() but this also doesn't do the full work as it also returns a promise and after resolving it we finally get our data.

Another challenge is since our empty array is const we can't simply put data into it. We could although simply change it to let but it's always better to use const. Wes showed at this point that a .push() into the array would result in a nested array that is our main array will have only one element which would be the array containing our data. He also showed that if we simply add integers like [2,3,4] into our exiting array they are simply added into the array and are not nested. So using this logic and to put elements into the array as individual elements we use Array spread operator.

To find the word matches we create a findMatches() function. Here the challenge is that inside the .match() function we can't use variables and whatever people search for will be variable and for that we need to use RegExp and then feed the result of the regular expression to .match().

Here the flags in RegExp used are gi where g is for glob al (look through entire string to match) and i for case-insensitive.

Now that we have found the matches we'll proceed to add the event listeners.

The whole displayed content on screen would be handles inside the displayMatches function.

Inside this function this.value contains whatever the user has typed into the box and so we pass this to our findMatches() function.

We'll use the content in the variable matchArray to generate the html content for our page. Here to make things pretty we would also highlight the text that has matched so for that we'll create another RegExp and then use replace() which is going to find whatever is matched in the regx and replace it with a span having class of hl that is highlight. Here are the contents of hl class

and here is the complete displayMatches() function

Finally to beautify things Wes used a function to add commas in the population.

and with this our project for the day was completed.

Blog on Day-5 of javascript30

Blog on Day-4 of javascript30

Blog on Day-3 of javascript30

The best way to learn is to teach.Programmer by Passion and Developer for Fun, and I love sharing my journey with everyone.

You can also do the challenge at javascript30

"In defense of the modern web" — great classic DEV post

What is Smart Contract?