Developers use code editors to write code. Code editors format and highlight your code to make it easier to read and understand.

These programming tools are equipped with interesting features such as Language-specific syntax highlighting, automatic code indentation, color schemes to suit your preferences and improve code readability, Plugins for initiating a variety of activities and default packages during the development process, a tree view of your project's folders and files for ease of navigating and many more.

We'll walk you through the steps to install Nimble, one of the best MacOS code editors. By the end of this article, you'll be able to create and edit code written in different languages using Nimble. Not only that, but you'll also learn about some of its unique plugins, which make it extensible, as well as its theming settings, which help you make your code more beautiful.

Understanding the Concept of Nimble

Nimble is a lightweight open-source, extendable Code Editor and IDE exclusively written for MAC. It is a document-based Cocoa application written in the Swift language. Nimble is popularly known for its high performance and easy extensibility. Not only these, but it's also popular for its support of many programming languages.

Thanks to LSP (Language Server Protocol), Nimble also provides programming language-specific features such as auto(completion) and diagnostics for its users. Finally, and most crucially, Nimble makes it simple to maintain, add, and build dependencies/frameworks when working on SPM projects.

You must have installed macOS 10.15 Catalina or higher, Xcode 12.4 or higher, and Swift 5.3.2 or higher before running the Nimble app because this is the only development environment it supports.

You can download the latest version of Nimble from this GitHub Repo.

Once you have successfully downloaded the .dmg file of Nimble, open it and drag-and-drop in the Applications folder. Afterward, launch the application, and your editor will appear as shown below: 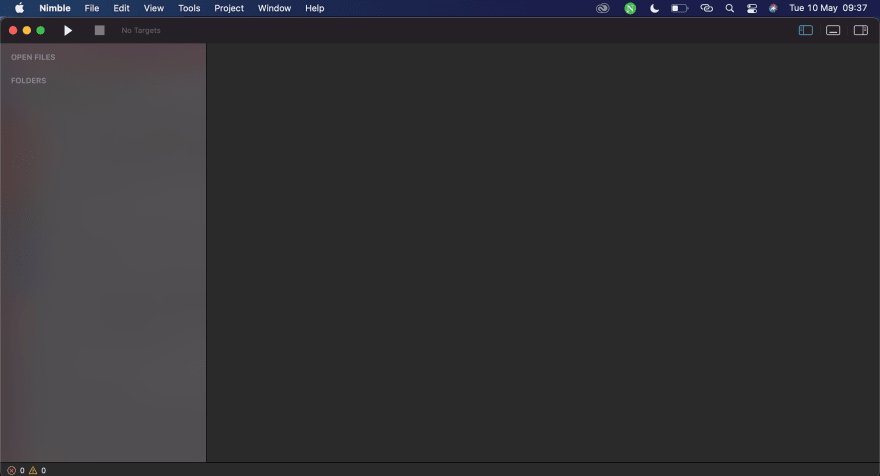 Creating Your First Project on Nimble

Note: When you create a new project on Nimble, you can choose from a variety of project types. We will use Type Executable for this tutorial.

Once the new project is created, you can insert your code in the built-in main.swift file, similar to any other code editor, and save the project in your working repository. 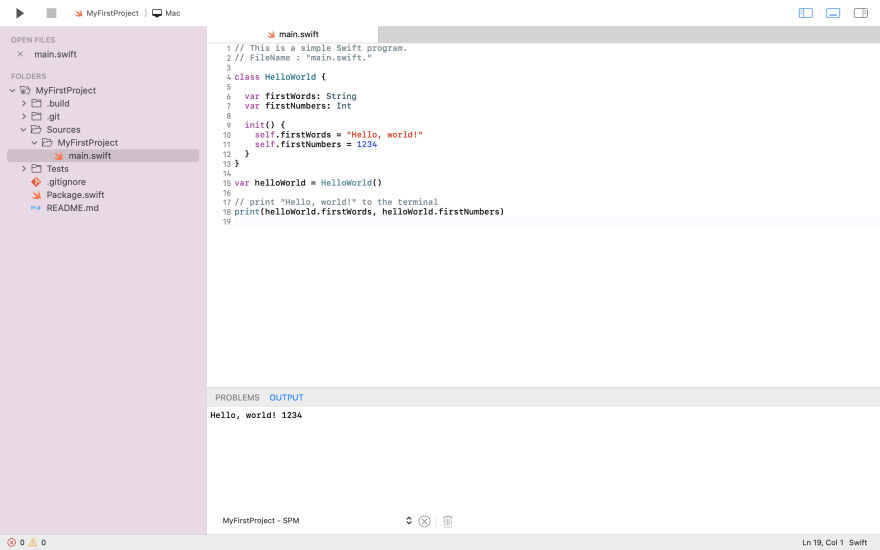 Themes help Code editors seem better by adding colors and beautiful backgrounds. They influence the appearance of the editor's user interface by changing the colors of elements of the editors/IDE.

The Nimble Code editor comes with two default themes - the default light and dark themes. You can simply customize the appearance of your editor by switching between the two inbuilt themes.

However, Nimble's appearance is not limited to just these two themes; you can also add compatible custom themes (.yml files) to your list of options. How do you achieve this? Goto ~/Library/Application Support/Nimble and create a folder called Themes in it. Next, copy and paste your created custom themes files inside this folder - that's all.

Alternatively, you may add a custom theme to your Code editor by right-clicking on it to show its contents before navigating to CodeEditor.plugin->Contents->Resources->Themes folder to add a new theme to the two default themes already in the folder.

Every editor has development plugins that initiate a series of operations and preset packages. The Nimble Code editor is integrated with a handful of plugins that improve the user experience and assist users to increase productivity. This chapter examines each of these built-in plugins and their functions:

This lesson provides you with a thorough understanding of Nimble's fundamentals and prepares you to use it in your software development projects.

The hidden secrets of TabView in iOS with SwiftUI

Custom build configurations for testing and debugging in iOS/Xcode

Thanks for keeping DEV Community safe. Here is what you can do to flag cdfcreator: