Do you like to be sarcastic on the internet? Are you tired of having hold or release the shift key with every letter while you're mocking someone? Are you obsessed with making your writing as unintelligible as possible? Well, I've got an app for you! 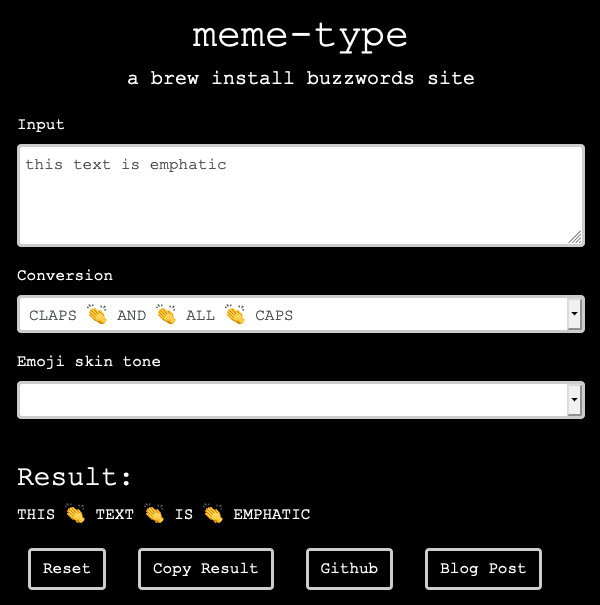 meme-type is an angularjs web app that transforms text into various type of internet speak. The live app is running here. View the project on Github here.

I was inspired to make this project while reading Because Internet by Gretchen McCulloch. In her book, McCulloch breaks down many online linguistic contructs, often taking an almost algorithmic approach. When I read her detailed analysis of keysmashing in the first few pages of the book, I knew I had to make this app.

In the aforementioned Because Internet, McCulloch lays out a set of observed patterns of keysmashing. I've listed a few of these patterns below:

My keysmash algorithm is inspired by these patterns, and thus uses to following rules to convert an input string to keysmashing:

Student athlete mode follows a post style about fitness, grinding, being better than everyone else, and using way too many emojis. See examples of this format on Know Your Meme.

In its current implementation, there are three ways in which an emoji will be added to a string:

meme-type is hosted using a combination of AWS S3, Cloudfront, and and Route53. For more info on how I use AWS to run my websites, see this post about the technical details of my blog.

The logic for meme-type's conversions is stored in an npm package I made called meme-type-npm. See it on Github here.

If you have comments or questions, feel free to write them below or reach out to me via one of the channels on my about page.

If you enjoyed this post or want to find out more about my upcoming projects, consider subscribing to my newsletter or checking out my blog. My email updates are only sent out once a month.

Once suspended, brewinstallbuzzwords will not be able to comment or publish posts until their suspension is removed.

Once unsuspended, brewinstallbuzzwords will be able to comment and publish posts again.

Once unpublished, all posts by brewinstallbuzzwords will become hidden and only accessible to themselves.

If brewinstallbuzzwords is not suspended, they can still re-publish their posts from their dashboard.

Once unpublished, this post will become invisible to the public and only accessible to Adam Davis.

Thanks for keeping DEV Community 👩‍💻👨‍💻 safe. Here is what you can do to flag brewinstallbuzzwords:

Unflagging brewinstallbuzzwords will restore default visibility to their posts.