While Wordle has caught Twitter feeds by storm, there’s something I love about playing the New York Times Spelling Bee game each morning.

It works by providing a set of letters, and you have to come up with as many words as you can that: 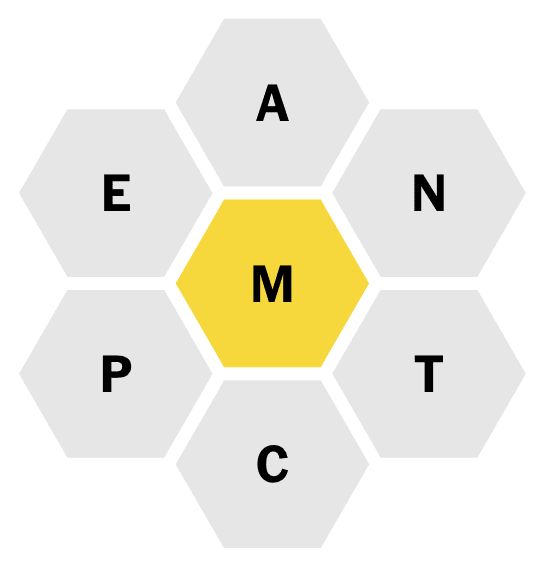 Recently, I took it upon myself to build a solver for this game using Elixir. Most of the code is in this post, but if you'd like to see the whole project you can check it out on GitHub.

Because the words in Spelling Bee are curated and intentionally exclude obscure words, we should expect that this program will suggest words that are not included in the solution.

So I’ll be judging the success of this program by the percentage of the solution words that are identified, ignoring suggested words that are not part of the official solution.

My approach was pretty simple. I needed to start with a list of English words, then filter based on the criteria of the game.

To get a list of English words, I used the word_list package that I created.

Once I created my new project, I imported my word_list package by adding it in the deps array in mix.exs

Then, I installed the dependency by running mix deps.get

Next, I wrote some basic tests so I can define some of the basic functionality.

These tests make sure that at least some valid words are found, and that all of the words include the center letter.

The following is the contents of the lib/spelling_bee_solver.ex file:

To print the solution, the inputs can instead be passed to printSolution/2

But does it work?

There were several extra words found each time, but since the solutions are a curated set of words this is to be expected.

While I’m sure there’s more I could do, these are some areas that I think have room for improvement:

If you liked this, you might also like some of my other posts. If you want to be notified of my new posts, follow me on Dev or subscribe to my brief monthly newsletter.

🗞️ We have just released our JBang! catalog 🛍️

Once suspended, brewinstallbuzzwords will not be able to comment or publish posts until their suspension is removed.

Once unsuspended, brewinstallbuzzwords will be able to comment and publish posts again.

Once unpublished, all posts by brewinstallbuzzwords will become hidden and only accessible to themselves.

If brewinstallbuzzwords is not suspended, they can still re-publish their posts from their dashboard.

Once unpublished, this post will become invisible to the public and only accessible to Adam Davis.

Thanks for keeping DEV Community 👩‍💻👨‍💻 safe. Here is what you can do to flag brewinstallbuzzwords:

Unflagging brewinstallbuzzwords will restore default visibility to their posts.