Want to see how it was made? I've written a post explaining just that:

Tales of the Ruby Grimoire - Part One - The Grimoire

Gather ye round, my friends, for the beginnings of what is known as a book of legends, a grimoire of wisdoms long considered forbidden in the lands of the Ruby lemurs.

Knowledges great and terrible, and secrets not for the feint of heart. These are the tales of the Ruby Grimoire, and the knowledges found within. 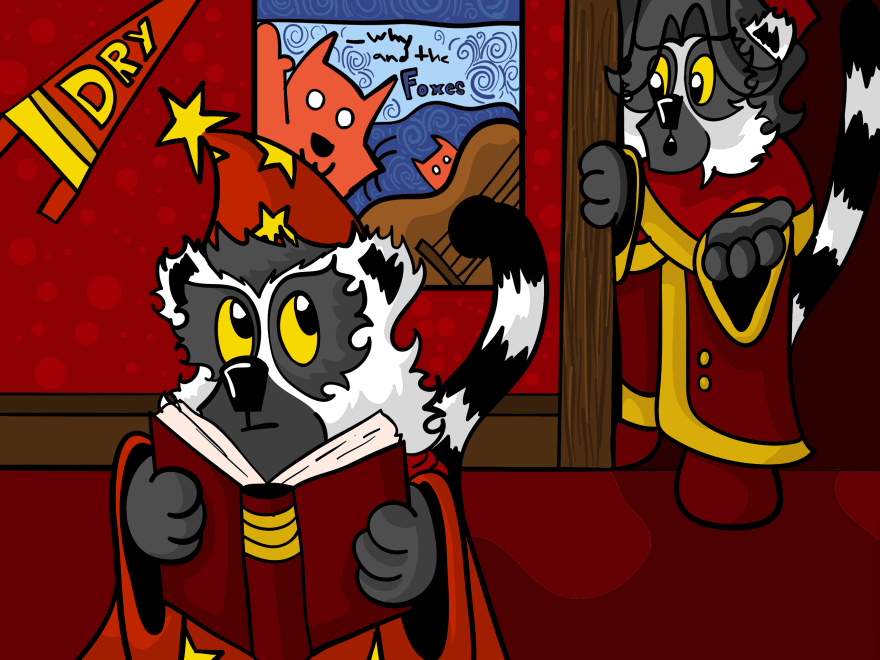 The council of 3.0 had been called, and Scarlet was readying to join them to discuss the future of the land of Ruby. With her was her student, Red, carrying out his latest lesson.

"Now be sure to finish the remaining problems by the time I return, Red. I expect I'll have many fun things to tell you of when I return." said Scarlet.

Red nodded, still writing away on his scrolls, but as Scarlet exited the castle a sly sort of grin grew on his face. 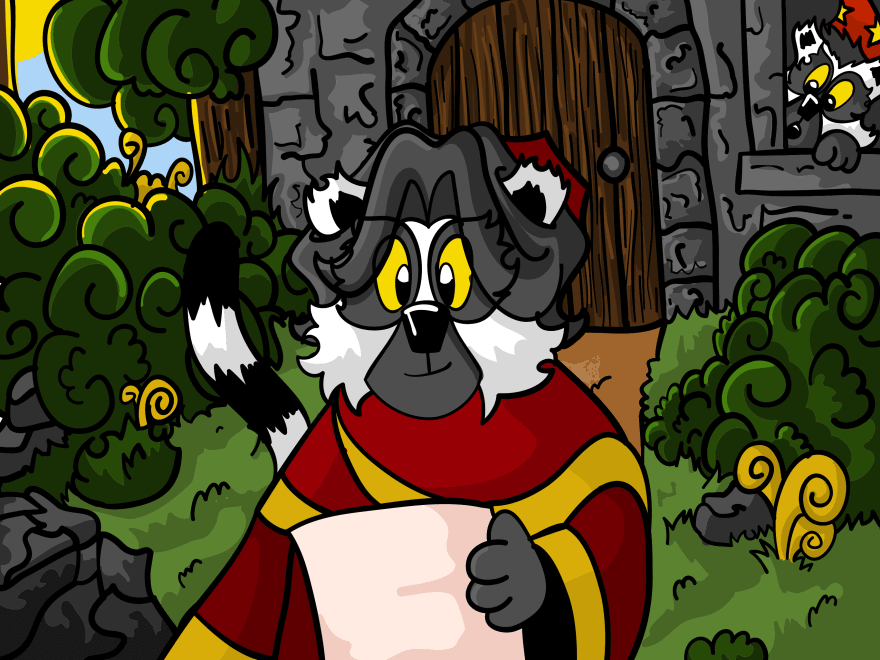 For you see, dear audience, there are secrets in the castle of Master Scarlet, tightly guarded and kept secret for many a generation.

Red is fully aware of this fact, but with his master gone, there are no protections on such materials that he cannot break. 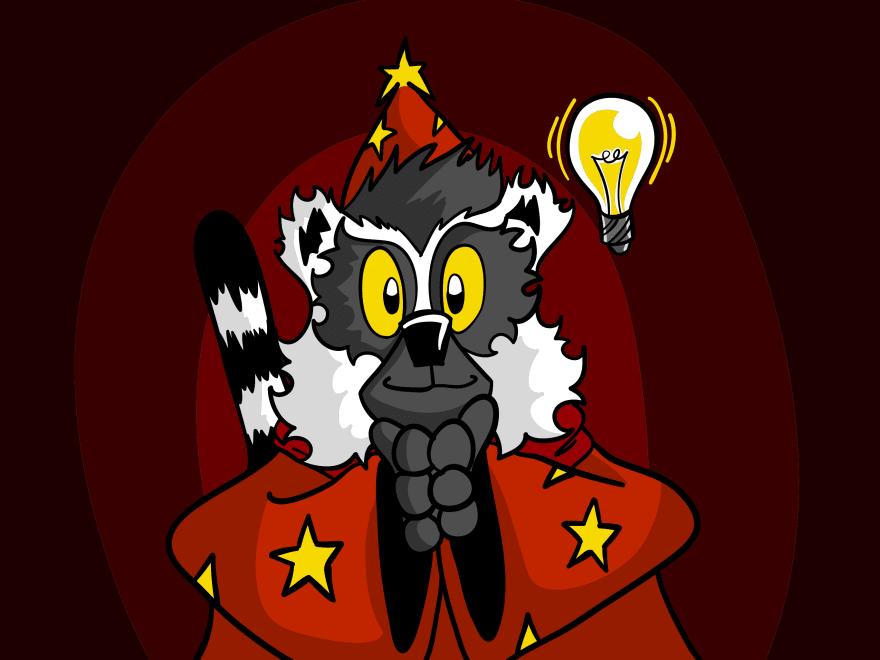 So begins the tale of the darkest of magics, forbidden since the days of old, kept under lock and key since before dear Red had drawn his first breath. 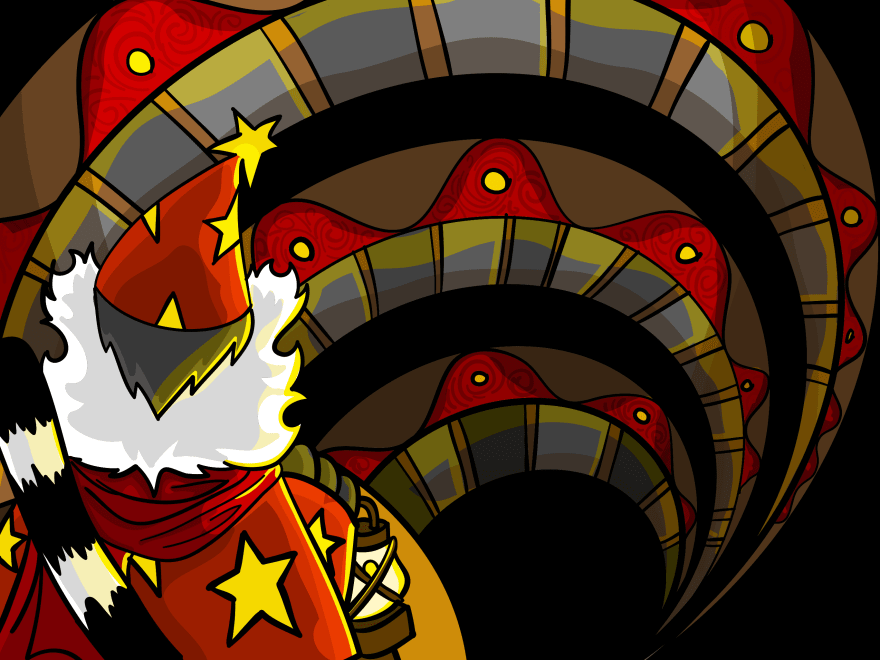 So Red journeyed, deeper and deeper into the catacombs of the castle until all light had faded and none was left but the whisper of his candle's flame. There, at the end of the stairwells, was a door thrice locked. 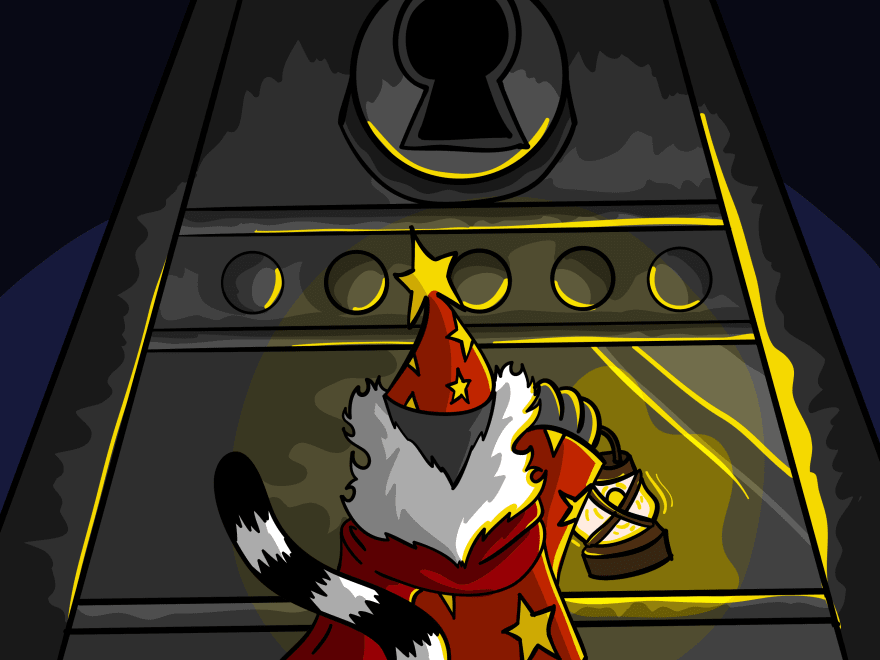 Once by reduction, twice by composed functions, and thrice by fundamental Ruby.

The locks fell one by one as the gleam in Red's eyes grew to a fervour, the secrets of the tower within his grasp at last! 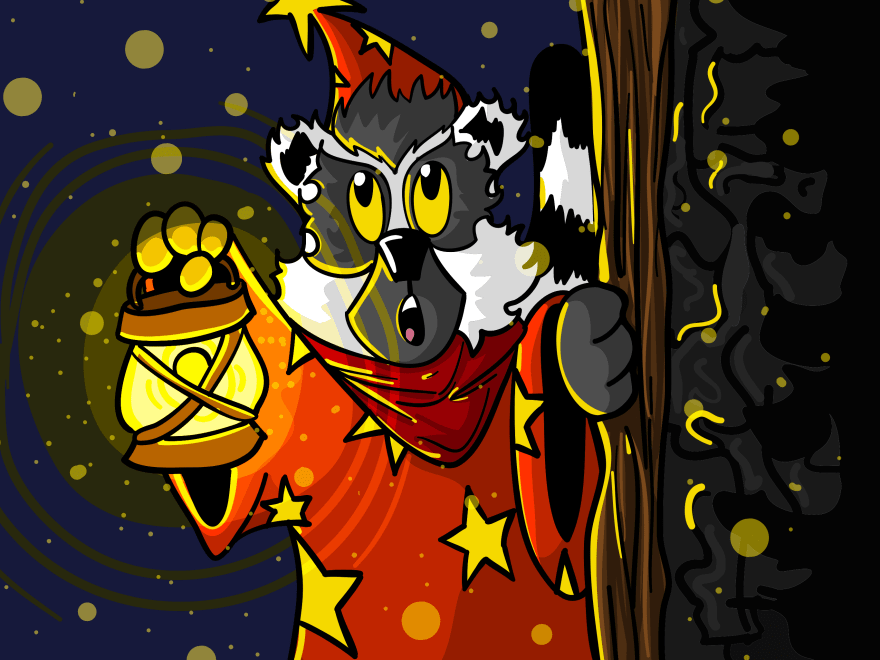 Slowly the door creaked open with an eerie hiss, a musty wind filling his face as the contents of the room came into view. A library, and one grander than even the grandest of libraries of the wise master Violet! Knowledge beyond all comprehension stretching through all eternity with its splendor. 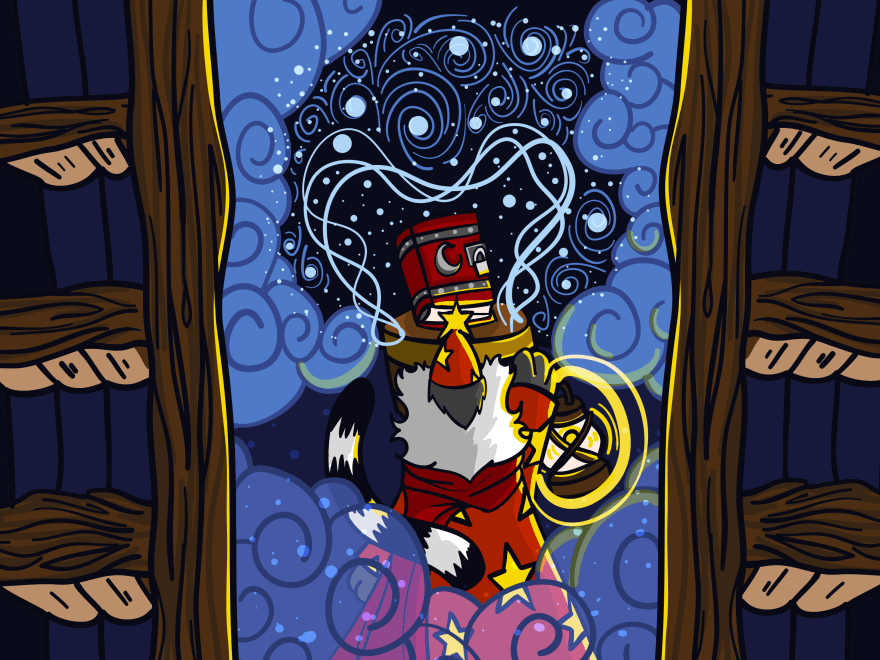 Red lost his breath at the sight of such majesty, but one book in particular caught his eye. A grimoire of no embellish, no fine craftsmanship, but locked and locked tightly, bolted down to its bindings. It spoke to him in its own way, a haunting melody that enchanted and called him to its pages. 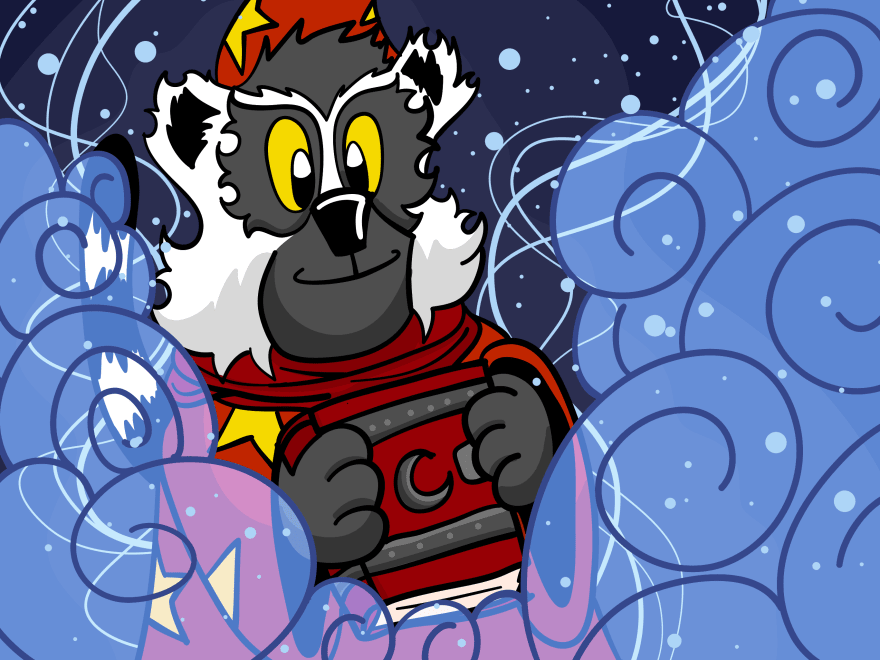 As his hand met the book, light began to suffuse the room in a glorious blue. 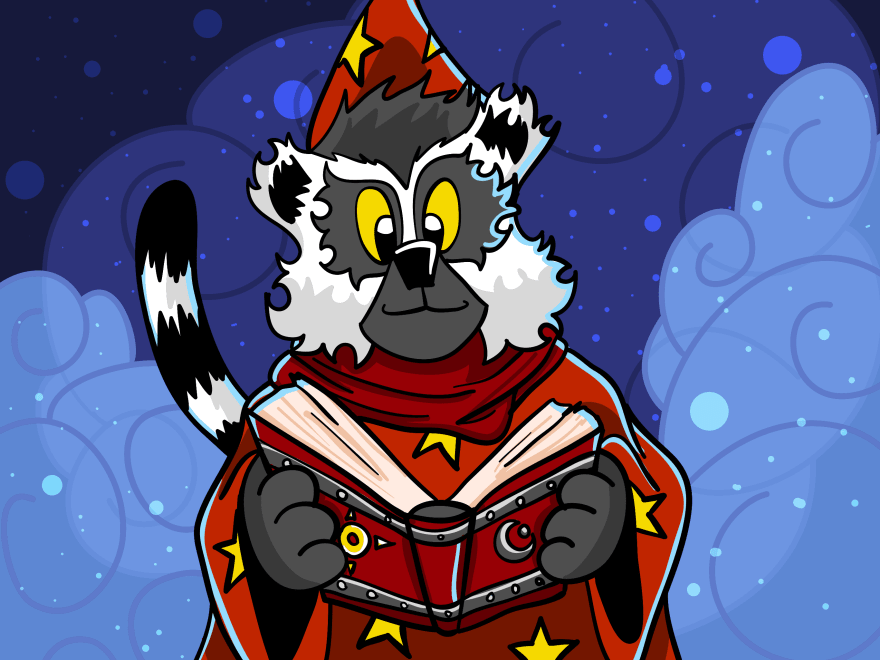 He opened the book, and the words on the page faded and ran away from his vision, frustrating him to no end as he tried to coax knowledge from the book. He would not be beaten, not when he'd finally found it!

...but then something changed. 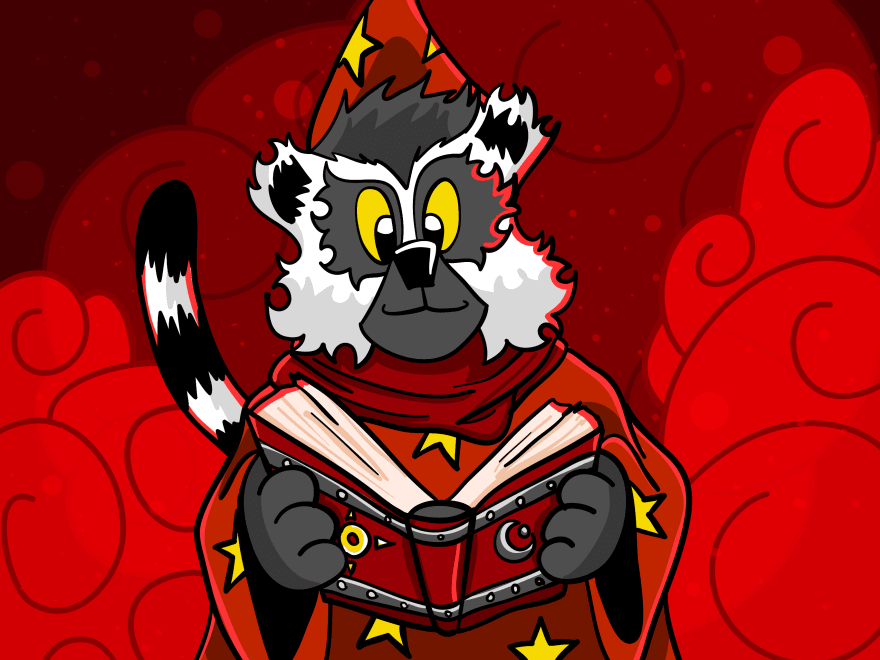 The air in the room grew suffocating, the words on the page bleeding into the paper as the fog began to glow an angry red. Then, a new phrase came to its pages:

"Welcome to the Ruby Grimoire, and thank you for freeing me young one." 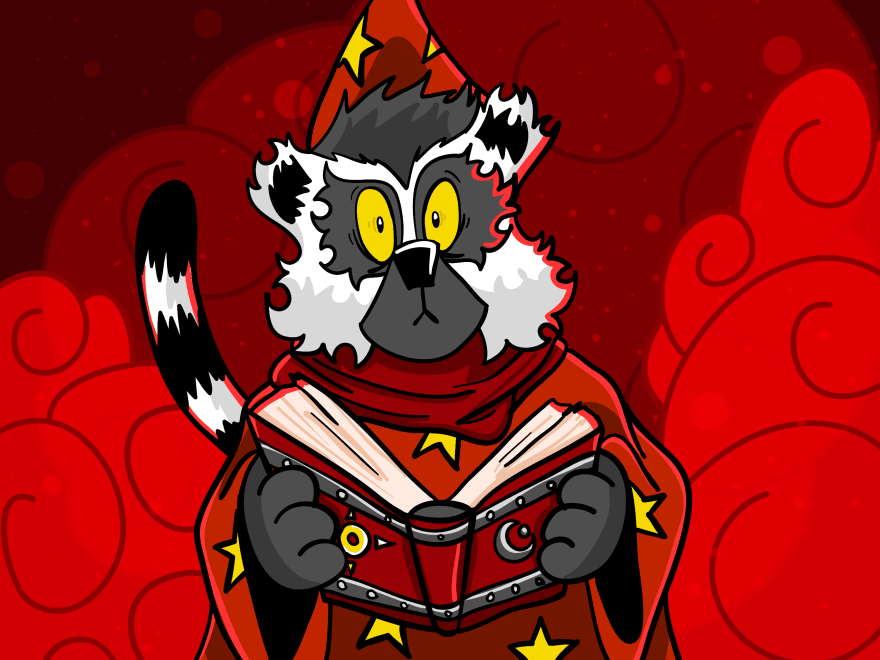 "Freeing!?" questioned Red aloud, "What does it mean freeing?"

...and the words on the page flowed together as if in reply:

...in a harsh and angular font, and when Red looked up, something was standing there. 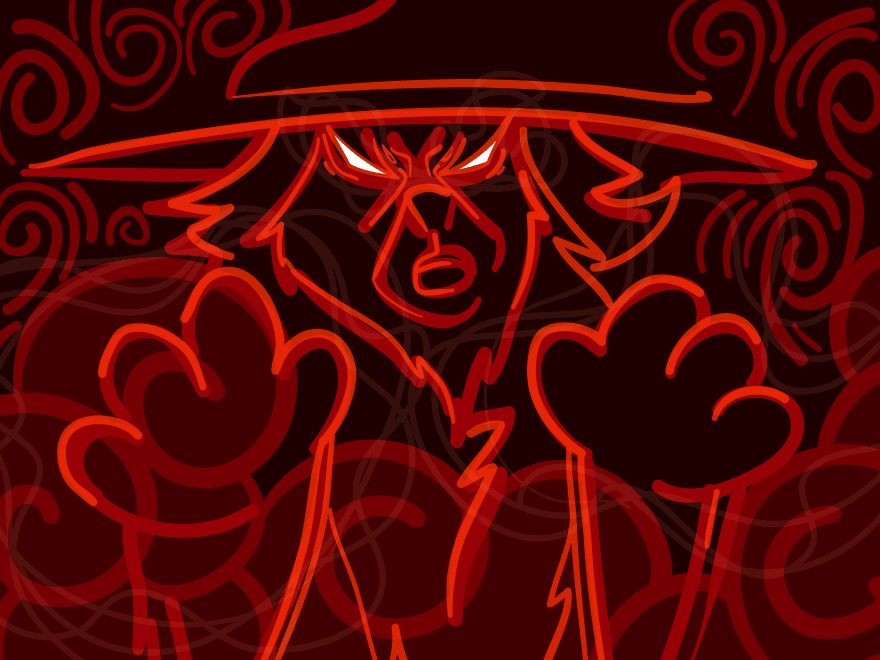 A specter, a malignant and angry being cloaked in the red fog with eyes aflame and a rumbling voice which shook the room. Each step a clap of thunder as it drew closer and closer still, and Red? 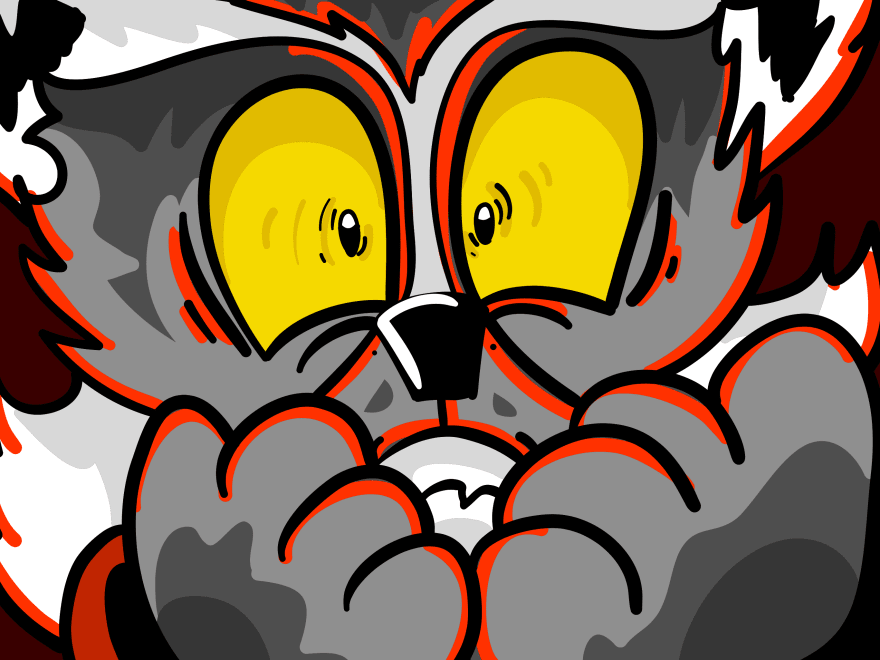 Red reacted how you might expect, terrified of course, but these are whimsical and fun stories and I never cared much for horror, so that's quite enough of that. 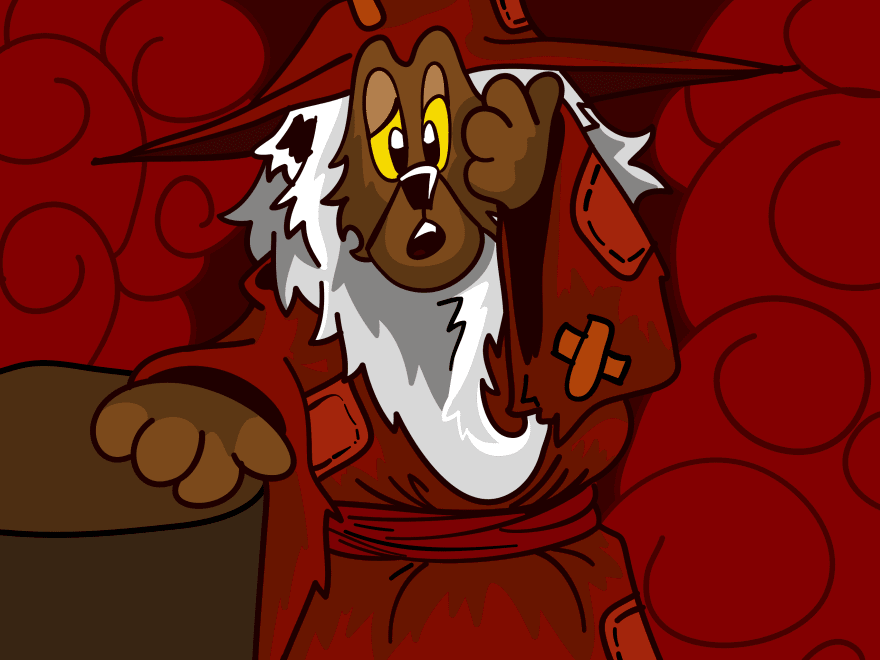 The fog coalesced as Crimson stepped out of the shadows, shielding his eyes from the light.

"Keep it down, no need to be rude. I can’t see a thing with that lamp, and it’s been quite a while since I’ve had visitors here." said Crimson, slightly annoyed. "...and quite loud ones at that!"

"Ah! The Grimoire! How long it’s been since there was a lemur strong enough to open it." exclaimed Crimson, staring down at the book in Red's hands. 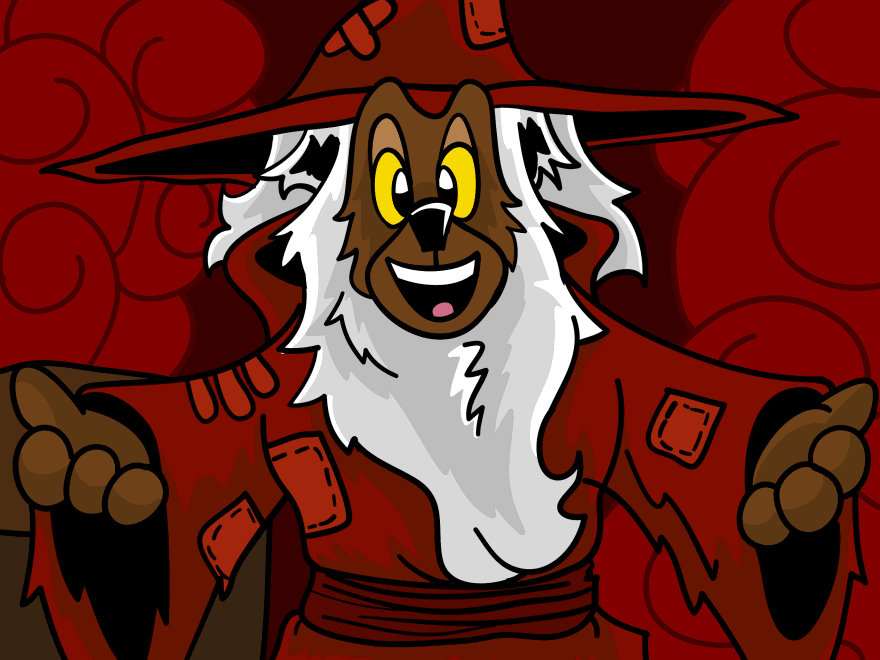 "Welcome welcome! So so long indeed, a seeker of my knowledges at last, how exciting it is! What lessons shall we learn first! What arts can we attempt, what stories to be told! So much possibility indeed!" Crimson said, almost tripping over his own words in excitement. 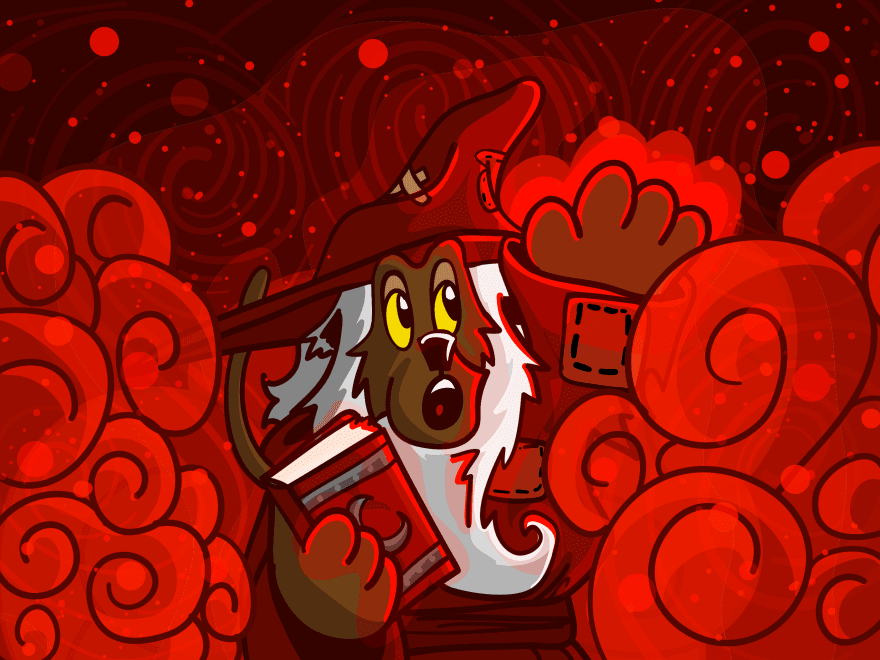 "Tales of the lands beyond the REPL, into the deep shells and languages of old and new alike, power beyond your wildest imaginations all written upon these pages. But I must ask, young one, are you willing to pay the cost of that knowledge?" said Crimson, continuing 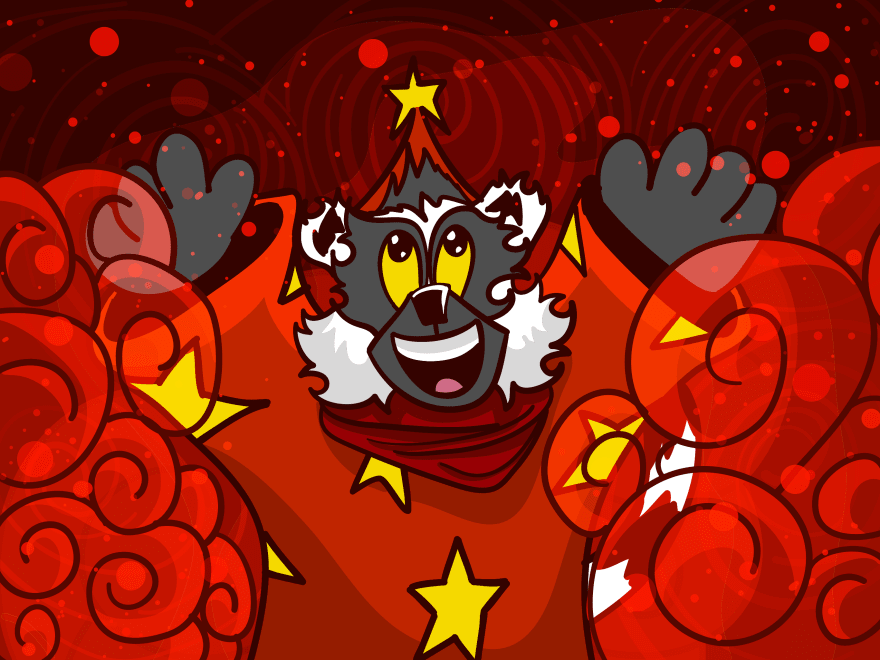 Red, poor poor Red, was transfixed, nodding vigorously. There were knowledges here beyond him, and knowledges he would learn no matter the cost.

The True Nature of the Grimoire 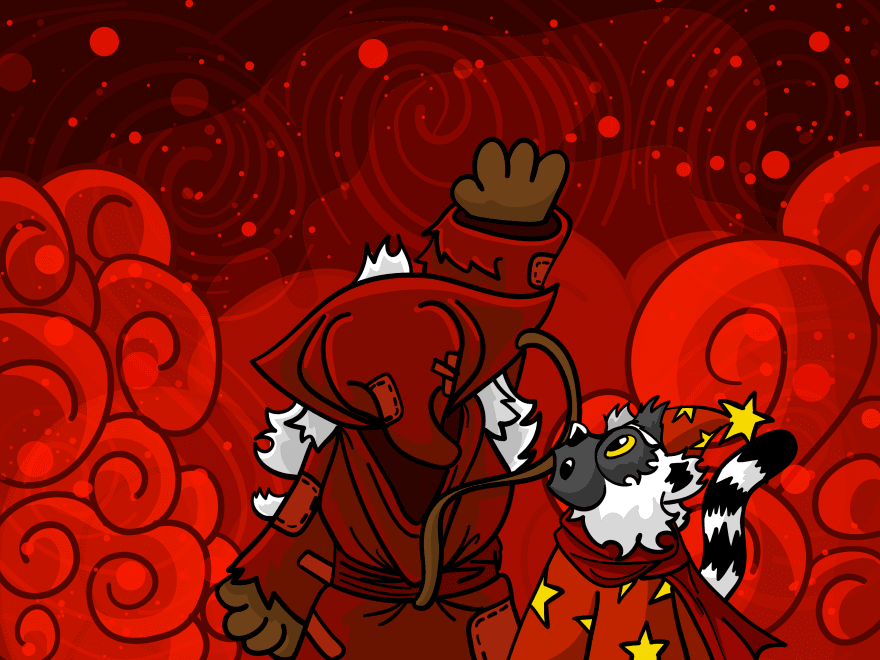 "The Grimoire is a journal of my journeys into the lands beyond Ruby, where I met several wise ones beyond me or anything that had been seen before..." said Crimson, "...and of all the tales that could be told, we shall start with three, some of my personal favorites." 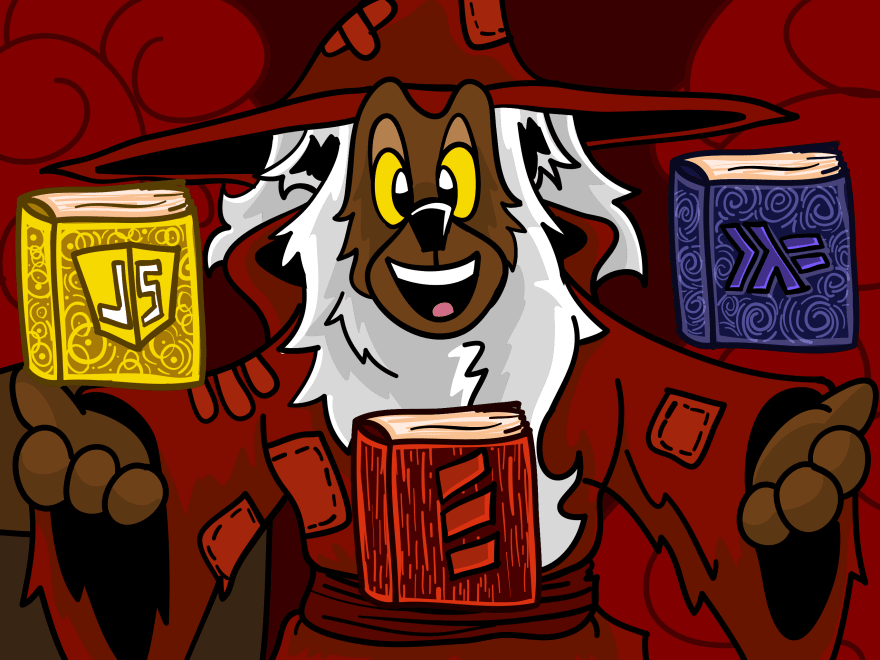 "Tales of the Lemurs of Scala, of Javascript, and of Haskell. Each bearing knowledge beyond what I’d imagined, and we’ll take a glance at each today." said Crimson

End of Part One

In the next parts we'll get into the adventures of the Grimoire, and what Red found inside.