When integrating with different states, there could be times when the state fails, resulting in failure of the complete execution. Like any error-handling techniques in a programming language, with Step Functions, we can also follow certain error handling techniques to gracefully terminate or retry the execution.

In this blog post, we will look at how Step Functions error handling techniques could be used with states which have an SNS SDK integration.

The error names such as - DataLimitExceeded, Timeout, and Permissions define the reason for exception and the necessary steps to take to resolve it. Based on the errors, as a workflow designer, you can define if you would like to retry based on the error name or would want to handle with a catch. 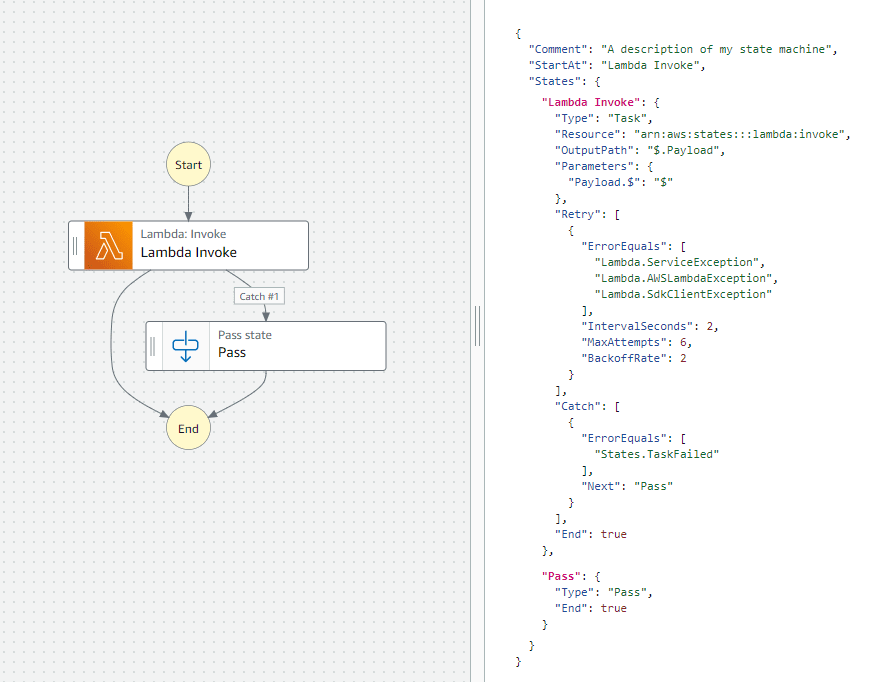 You can read more about error handling in Step Functions here.

In this workflow, we will use multiple states. These states invoke different AWS Services that are executed in a parallel manner with Parallel. If any of the services result in an error, the parallel state also stops.

catch then gets executed with the state which integrates SNS SDK to publish to a specific topic about the error information. 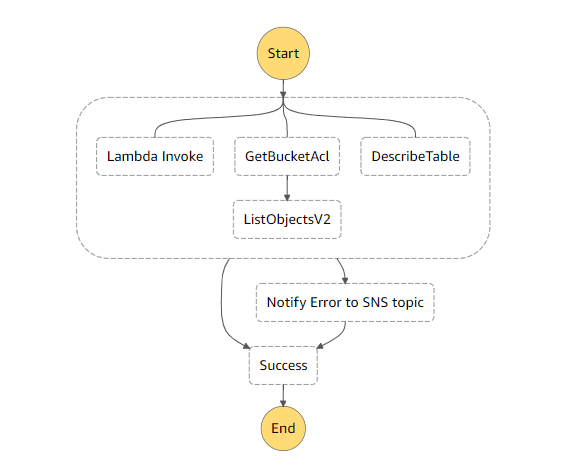 Based on the parallel state, if an error occurs, either Notify Error to SNS topic, or parallel state is considered to be successfully executed as Success state.

With this workflow, if the execution encounters an exception, then it gets handled with SNS SDK integration and terminated with success. If all is well, then all the states in the parallel state also end with a success state.

Note : On creating the state machine, an IAM role is created, but the auto-created policies currently don't include the SDK based API policies. You would have to add the policies to the IAM role when it's created.

The parallel state starts the execution of all the three sub-processes, and as DynamoDB DescribeTable API starts, the IAM policy doesn't allow it. This causes an error, DynamoDb.DynamoDbException. Then, the parallel state catches it, and executes the Notify Error to SNS topic state. The topic has an email based subscriber which receives the following JSON based email.

The parallel state starts the execution of all the three sub-processes, and as S3 GetBucketAcl API starts executing, the IAM policy doesn't allow it. This causes an error, S3.S3Exception. The parallel state catches it, and executes the Notify Error to SNS topic state. The topic has an email based subscriber which receives the following JSON based email.

Execution 3 : When IAM role doesn't have s3:ListObject permission but has s3:GetBucketAcl.

The parallel state starts the execution of all the three sub-processes, and as the S3 process flows, it successfully executes GetBucketAcl API. Then, it shows a response, but for ListObjectv2 API, IAM policy doesn't allow it. This causes an error, S3.S3Exception. And the parallel state catches it, and executes the Notify Error to SNS topic state. Additionally, the DynamoDB operation was successful as well, as it was executing in a parallel manner. The topic has an email based subscriber which receives the following JSON based email.

With all the permissions, the states execute successfully, and because there is no exception, Notify Error to SNS topic state doesn't get executed.

With all the permissions, programmatic errors resulting from your Lambda function code are also handled with catch. In the Lambda function, NodeJS runtime added a snippet to throw an error.

This error is caught and gracefully handled with the Notify Error to SNS topic state, which is notified via email.

With the error handling techniques provisioned by Step Functions, you can gracefully handle the errors. These errors could be resolved in different AWS SDK integrations with the supported 200+ services for a more automated error handling.

How to Call a Service from a ROS2 Launch File