Hello Javascript Developer!! In this part of the series, we discuss why objects are so important in Javascript and how Javascript implements object-oriented programming.

A prototype-based language has the notion of a prototypical object, an object used as a template from which to get the initial properties for a new object.

In this post we discuss the following concepts in detail:

Prototype is an object that contains all the reusable properties, methods along with the prototype of its parent.

All JavaScript objects inherit properties and methods from a prototype.

Have you ever wonder how we can use built-in functions, methods, and properties like .length, .map, .pop?? We never defined it or write any code to implement it.

So, here Prototype comes into the picture. So whenever you create a javascript object, JS Engine automatically attaches your object with some hidden properties and functions.

Let's try to understand this using an example:

When we create a simple array in javascript, along with its element, notice that there is one more property called __proto__ (called dunder, double under) that attaches to it automatically.

If we expand this then you'll find the list of all built-in methods and functions. 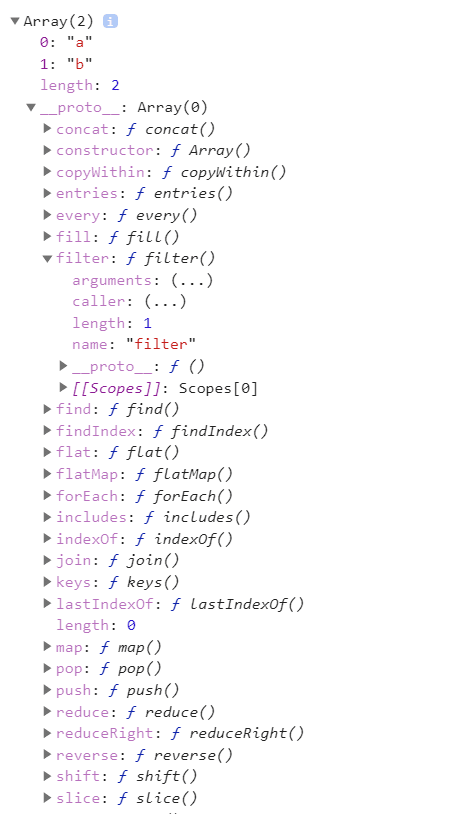 The __proto__ property holds a reference to the object we defined as the prototype. This is the property on every object that gives it access to the *Object prototype * property.

The above scenario is not just limited to arrays but applicable to all objects and functions as well.

Let's explore the same in the case of functions:

Everything in Javascript is nothing but an Object.

Whether you make an array, or a function it is down the prototype chain ends up being an Object.

Prototypical inheritance refers to the ability to access object properties from another object. We use a JavaScript prototype to add new properties and methods to an existing object constructor. We can then essentially tell our JS code to inherit properties from a prototype.

In the above code snippet, we update the prototype of obj2 and set it as obj1. So by this, we can access the properties and methods of obj1 into obj2.

Now if obj2 try to access the function getDetails()

So this is how Prototypal Inheritance works in Javascript.

The main advantage of Prototypal Inheritance is code reusability.

Let's try to understand this using an example:

Thank you for your time !! Let's connect to learn and grow together.