Today, I will explain React, specifically the hooks. I will write the hooks in series, so you can take it slowly to understand how hooks work under the hood, and use it appropriately on your code.

Bear in mind, that these writings are of my own, and there might be a better way to use hooks, but my focus will be on understanding how each React hooks work.

And for this one, I will focus on the most basic hooks of all - useState and useEffect.

Let's start, shall we?

In this article, these are the topics covered:

What Is Hook, By The Way?

In the beginning, React components are created using class components. So, the methods of React components are extended from Component object, which contains several setters and getters for states and other stuff like the lifecycle of the component. This is good, but there are some concerns addressed by the React, which are:

You can learn more about the motivation behind hooks in React.

With these, the hooks are established, with a condition that we are moving from class components to functional components.

Here's the general difference between class components and functional components.

useState - The Pillar of States

Well, I did write about the basics of states and props, and you can take a look at it in my article here: 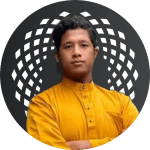 [ReactJS] The Basic of State and Props

But, to simplify it, the state is something that changes, so that React can trigger rerender when it happens.

The hook that does the thing is useState. Let us take a look at its usage.

useState is a hook to create the state for you. It returns 2 values, which are the value of the state and the state mutator. You will pass a value inside useState, which is the initial value.

Using the example above, myState is the state itself, so you can use it in your JSX. When you trigger the mutator, React will trigger the rerender, and then you can see the changes in your render.

State can be any name you want. myState is just an example, so you can use something like teacher, isToggle or anything that reflects on what changes you want to monitor.

Okay, it is time to slow down the clock and let's see what we have here.

So, we pass a function to the setActive which returns a new value for the state. For the function, it will accept one parameter, which is the previous state, and then you can do whatever mutations you want, and finally returns the new value to the mutator function.

This is an example of string manipulation.

Noticed that I omit the prevState thing? Yeah, that is actually optional, and you can make it shorter!

So, that is how you use useState. Three things to pay attention to:

useEffect - The Lifecycle of Components

Before introducing useEffect, let us revise what is the lifecycle of components inside React. 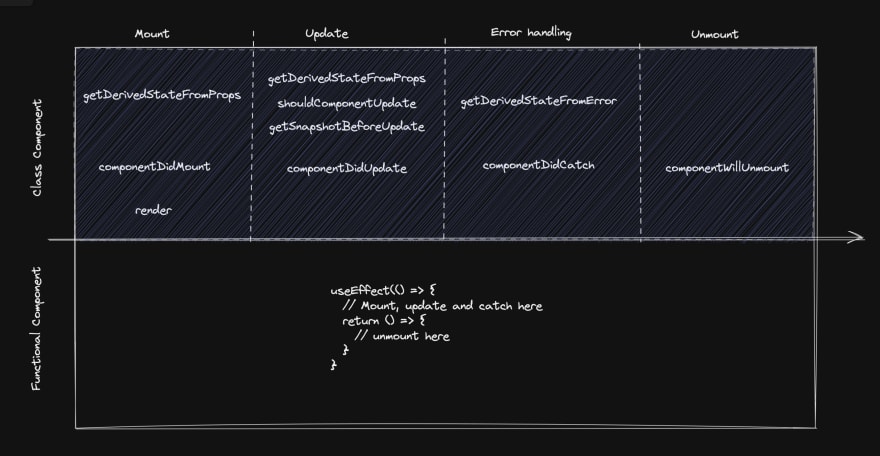 Across render cycles, there are 4 main phases, which are mount, update, error handling and unmount.

The update phase is when there is a change in state. Remember that I mentioned rerenders when the state changes? Yes, this is the phase that is responsible for the changes to the render.

The error handling phase is when there is some problem with the lifecycle. For example, somehow there is an error regarding your state, and later React will send a signal (or error) for logging, and will handle the render for you.

And finally, unmount is the end of your component's life, which happens when you close the page or are redirected away from the page.

In class components, there are a lot of methods available for you to use to allow granular control of the lifecycle. Functional components, however, only require one hook to manage it.

Let's get into the usage of useEffect, then!

When Should I use useEffect?

When you need to update values that are reflected in the DOM, then you need to use useEffect where it will be triggered when its dependencies have changed. Wait, what is a dependency? I will get to it soon. Let's see the anatomy of the useEffect.

There are two things that you should pass to useEffect, which are your function to be triggered during dependency updates, and the array of dependencies.

Then, what is a dependency? Well, dependency is the variable that you want useEffect to listen for changes. Let's see an example then.

Using the example above, there are 2 states declared, which are humanName and catName. And for useEffect, I pass a function and one dependency only, that is catName. Okay, I have questions for you.

Can we include more than one dependency? Well, sure you can! If I want to track changes to both catName and humanName, I can just add it, so useEffect will be triggered when any one of the dependency from the array of dependencies changes.

Can we add other than states as dependencies? For your information, you can also include things like props, refs and others as well, as long as the value changes. But be mindful of what you include as dependency, because in some cases, rerenders can be quite expensive.

The Reusability of Hooks

Remember when I said that hooks are reusable? Yes, hooks are indeed reusable. Notice in previous example, I used two useStates? You can declare as many states you want. Same applied to useEffect as well!

"Well, this is interesting. But how about I just want to run it only once, during the mount, or maybe during the page closure?"

Well, I got just the thing for you!

Notice that I didn't include any dependency, but remember that useEffect will always trigger during mounting, so the console only prints out once.

For the second one, I just log the console in the return, which means that it will only happen during unmount, so the console only prints when you close the page.

So, there are three ways (actually!) to use useEffect.

For the first and the second, I've already explained how it works, but the third one will run as long as there is rerenders.

I would recommend you to add an empty array or array of dependencies unless you know what you are doing. Rerenders are already costly, triggering useEffect every time will be expensive too.

There is another thing that you need to bear in mind.

If you make an attempt to update your state, which happens to be included as your dependency, this will trigger and runs indefinitely, and your computer will enter a phase of "Dormamu, I've come to bargain!" thing. Nope, don't do this!

Same as the following example.

I know, some of you might have weird ideas, but this also triggers an infinite loop! Updating each other's dependency will throw you into the unknown!

Before I close this article, there is a similar hook as useEffect we called useLayoutEffect. So what is the difference then? There are still a lot of hooks that you can discover, but it will be for other articles.

Any questions, or if you detect some error, please comment down below, and share (if you will) for more understanding of how hook works in React.

Until next time, adios, and may be peace upon ya!

Once suspended, alserembani will not be able to comment or publish posts until their suspension is removed.

Once unsuspended, alserembani will be able to comment and publish posts again.

Once unpublished, all posts by alserembani will become hidden and only accessible to themselves.

If alserembani is not suspended, they can still re-publish their posts from their dashboard.