In this article series, I'll show how you can use Github Actions to setup a simple workflow that after every push to your Github repository will build and publish your code as a docker image and then deploy it to your VPS running Traefik with zero downtime.

If the above made your head spin, might be worth brushing up on a few topics first:

Because running a fancy Kubernetes cluster might be all the rage, but it's overkill for most things. Not to mention really expensive. If all you've got is a bunch of small (static?) websites or low traffic hobby projects, you'll be better off just running them all in a cheap Virtual Private Server (even a free one - e.g. GCP Free Tier).

That's where Traefik comes in, letting you run multiple domains/subdomains on the same host, each of them running nice and isolated in a Docker container.

And Github Actions takes care of deploying everything automatically, so you don't have to do anything other than push your code to the master branch (and maybe throw in a SemVer tag to keep things organised). You can even do zero downtime deployments! Neat, huh?

I guess the flowchart was inevitable then. It goes something like this: 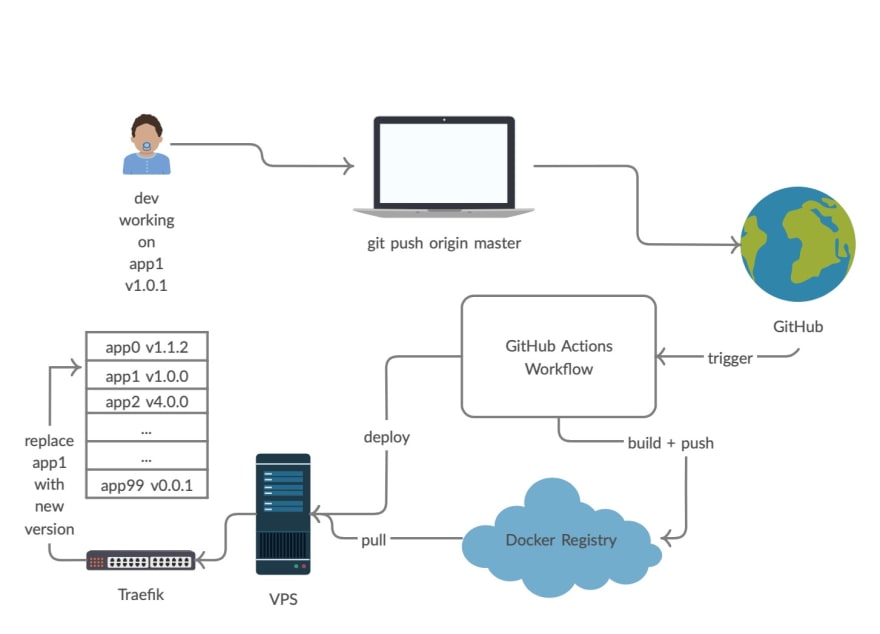 Let's push that docker image to the registry

Right, so now that the how and the why are clear as a whistle, let's push that docker image to the registry! We'll do that by creating a GitHub Actions Workflow in our GitHub repository:

That was easy, is that it?

Sure, if all you needed was a way to automatically push a docker image to the registry once you push your code and you're happy enough to manually deploy that to your server. If not, and you want to automate everything like the nice flowchart showed you, tune in for Part 2.

How to create React Native App for Android, iOS and Web without Expo