Read this article on my blog

When I started learning React, I made a few mistakes with the way I was using React.useEffect, especially managing the dependencies. My effects kept on running when I didn't want them to run, causing strange bugs in my apps. So today I would like to share with you a few things I learned along the way about this hook. Hopefully, it will help clear things out for you.

Developers often misunderstand useEffect as a lifecycle hook, coming from class components where we had things like componentDidMount or componentWillUnmount. While we can achieve similar behavior with useEffect, it is not correct to say that this hook represents a certain time in the lifecycle of a component.

In fact, useEffect is nothing but a mechanism for synchronizing side effects with the state of your app. This means that the code you place inside this hook will only run if a certain state of your app changes.

Nothing better than a simple example to understand this:

🔗 Here is a link to the code sandbox

In this <HelloWorld /> component, we have 3 useEffect that will synchronize with different state changes:

Let's take a look at the output in the console when we land on the page: 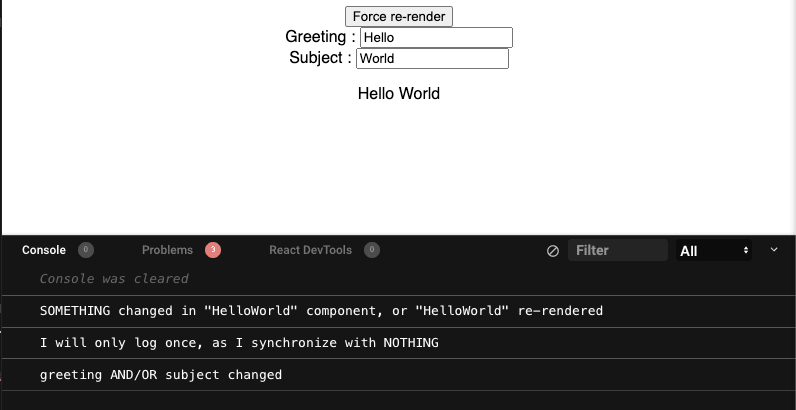 All hooks are run, because:

What happens if the component re-renders, without any state change (thanks to the "Force re-render" button I've included)? 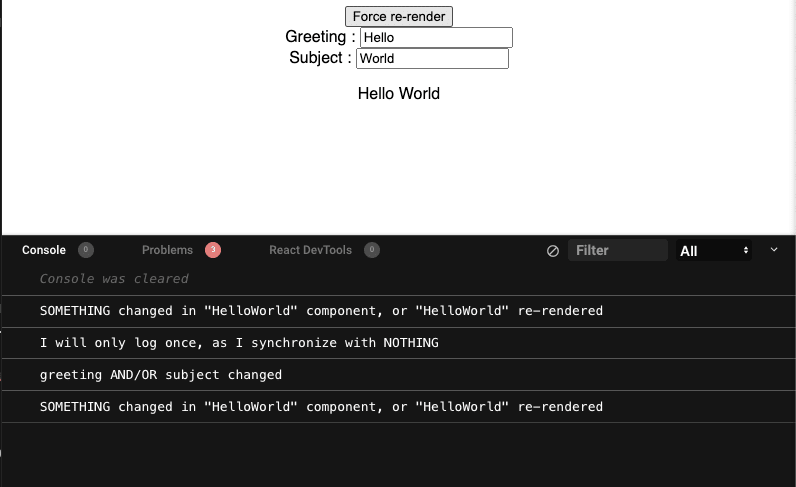 The only useEffect that was executed was our #1: because it has no dependencies, it gets executed every time something changes. The component re-rendered, this means something changed in the app (either a state in the component, or in the parent component), so this side effect is triggered.

Now if I type a single character in the greeting's input, let's see what happens (🧐 can you guess ?) 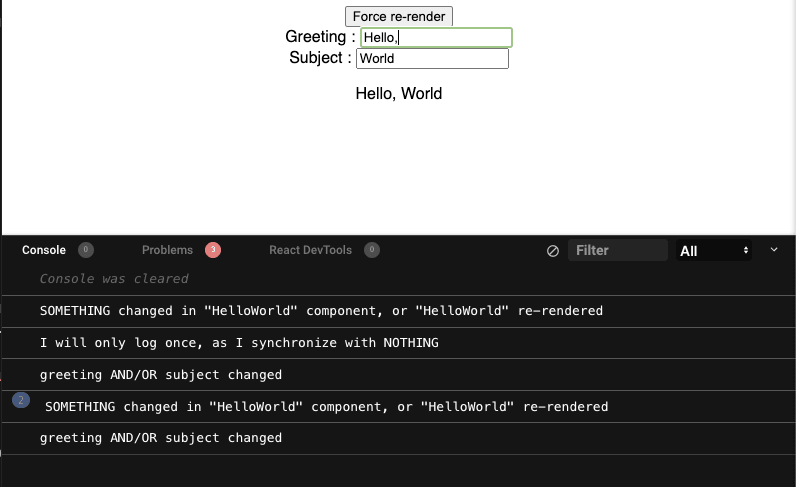 At this point, our useEffect #2 will never run again, it already has done its job, which was synchronized with nothing.

🤔 OK Yohann, this is all wonderful, useEffect has nothing to do with component lifecycle and all that, but I still want to know when this code is being executed!

I hear you. Your effects run (if one of their dependencies changed) after the render, DOM updates and screen painting phases, as you can see in this great diagram by Donavon : 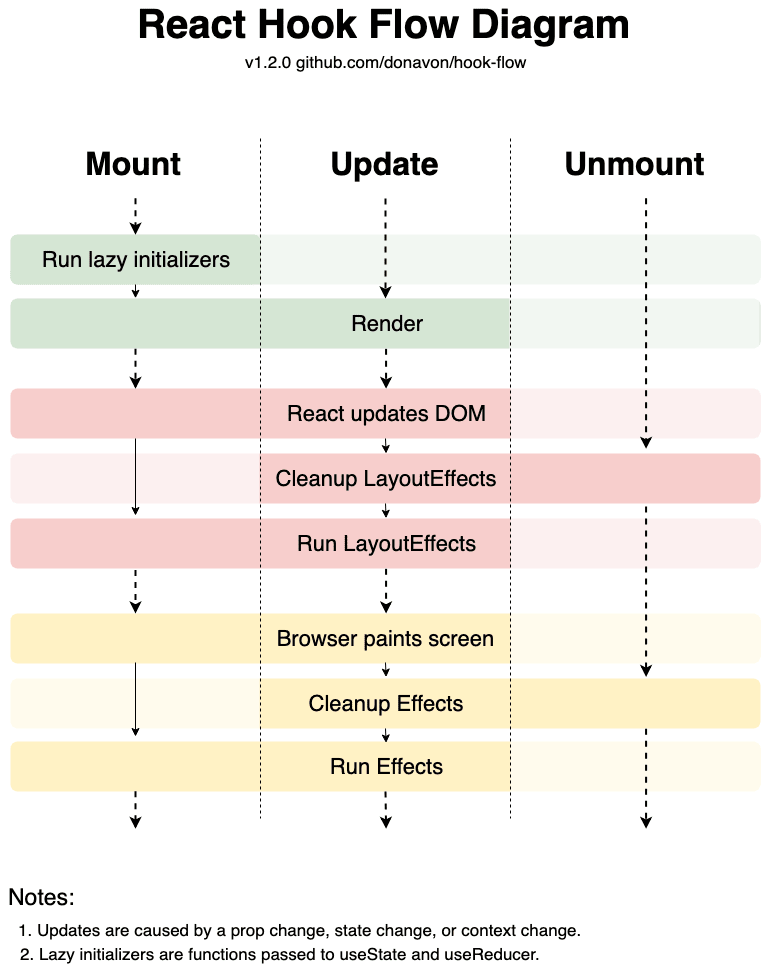 I won't go into more details about this hook flow here, but the main thing to take out from this is the quote from Ryan Florence I mentioned earlier:

Let that sink in, and you'll be fine 👌

Now that we're on the same page, let's talk about something called "memoization". Sometimes, in your useEffect, you will need to include a function in your dependencies. Consider this:

You might think that this is perfectly fine: whenever count change, we check its value, and if it is over 100 we call alertCountOver. Also, because we want to make sure that we call the up-to-date version of alertCountOver, we include it in the dependencies of our hook (also because eslint told you to do so).

Well, here's what's actually going to happen: every time the Counter component is going to re-render (because its parent re-render, for example), the alertCountOver function is going to be re-initialized. This means it will change every render, so our useEffect will be called, even if count didn't change 😤

This is because React relies on value stability for useEffect dependencies, and this is the problem that React.useCallback solves:

We still create a new function on every render, but if its dependencies didn't change since the previous render, React will give us back the exact same function (the "memoized" version). So now our useEffect will only be executed if one of the following condition is true:

This means that every time count changes, the memoized version of alertCountOver will be updated to reflect this change.

➡️ To wrap things up: as long as you include something in your dependencies, ask yourself "Is the value of something stable, or is it going to change every render ?". If the answer is yes, then you probably need to memoize it, otherwise your effect will run when you do not expect it to run.

📝 Note: sometimes, the easiest way is simply to move the function outside of your component (at the top of the file, or in another file). This way, it becomes stable by nature and there is no need to memorize it.

To read more about "memoization" and "value stability", check out this great article.

I'll finish this article by mentioning a few good practices when it comes to using useEffect in your apps.

#1 - If you must define a function for your effect to call, then do it inside the effect callback, not outside.

As practical as it is to use useCallback as we did before, it's not always a good idea. In fact, this adds more complexity in your codebase, and it's always good to avoid that as much as possible. Every line of code that is executed comes with a cost, and wrapping everything in useCallback is certainly not a good idea. useCallback is doing more work than just a simple function declaration. So, when it can be avoided, it should be.

That was precisely the case in our (very contrivied) previous example, and the solution is quite simple:

No more need to include the function in our dependencies: because it's only being used by the useEffect, its place is within this useEffect. Of course, this example is still really stupid, but you get my point. In the real world, this would translate into something like this, for example:

I've seen people building huuuuuge useEffect in their components, to do all sorts of things in one place. Don't do that. You will just end up managing a giant list of dependencies, resulting in confusion, potential bugs, and headbanging on the wall to try and solve them. Remember that you can separate everything in multiple useEffect, each having its own dependencies. The code will not only be much more readable but way easier to maintain.

Something I did not mention before: you can return a function in your useEffect hook, and React will execute this function when the component is being unmounted:

This is not only useful, but strongly recommended when doing things like attaching event listeners to the window object:

Trust me, this will save you the pain of debugging some really weird stuff going on in your app 😇

Wow, you're still there? Congrats on taking the time to sharpen your understanding of this wonderful useEffect hook. I hope this post was useful to you somehow, and that it will save you some time when you will be building React Components in the future. React hooks are absolutely amazing but can definitely cause you some troubles if you don't understand what's behind them.

Feel free to let me know your thoughts about this, or to share any additional good practices that I didn't mention here. And in the meantime, don't forget to eat JavaScript for breakfast ☕️ and have a good one!

GitHub resources to level up your JavaScript coding skills

How to become a full-stack developer in 2023

Tooltips! A Nice Singleton-y Way To Only Show One At A Time

Once suspended, alarid will not be able to comment or publish posts until their suspension is removed.

Once unsuspended, alarid will be able to comment and publish posts again.

Once unpublished, all posts by alarid will become hidden and only accessible to themselves.

If alarid is not suspended, they can still re-publish their posts from their dashboard.

Once unpublished, this post will become invisible to the public and only accessible to Yohann Legrand.

Thanks for keeping DEV Community 👩‍💻👨‍💻 safe. Here is what you can do to flag alarid:

Unflagging alarid will restore default visibility to their posts.