This will be a long article because we need to cover a lot of fundamental properties of HCL. It is important to understand how it works to fully utilize its full potential.

HCL uses block to define resources. In this article we will go through HCL block types and what they are used for.

A block is a container for other content. Blocks have a type that can have zero or more required labels followed by { } brackets that contain block's body. Blocks can be nested inside each other. This a general representation of a block:

Let's take the resource block from previous article and break it down:

Here we have a block of type resource. Since we are using AWS provider we can check documentation here.

aws_instance is the first label that points to the type of AWS resource and app_server is the second label that represents the name of the resource. Terraform supports accessing elements using dot notation like so: aws_instance.app_server.tags

As for the tags block, it is a good idea to get into the habit of tagging your resources.

Now that we have a general idea of Terraform block, let's explore what kind of blocks we can use in our configurations.

As a part of learning HCL we will cover these block types:

We will go over basic structure and purpose of each block. Once we are familiar with these blocks we can start building infrastructure that starts resembling something useful.

Here is an example of a terraform block:

Provider blocks specifies special type of module that allows Terraform to interact with various cloud-hosting platforms or data centers. Providers must be configured with proper credentials before we can use them. In previous article we exported access key into our environment and that allowed us to deploy resources. Versions and download locations of providers are often specified inside the terraform block, but you can also specify it inside this block as well.

Resource blocks are used to manage resources such as compute instances, virtual networks, databases, buckets, or DNS resources. This block type is the backbone of any terraform configuration because it represents actual resources with majority of other block types playing supporting role.

Variables are often in their own file called variables.tf. To use a variable it needs to be declared as a block. One block for each variable.

Terraform has a strict order of precedence for variable setting. Here it is, from highest to lowest:

Often called local variables block, this block is used to keep frequently referenced values or expressions to keep the code clean and tidy.

Locals block can hold many variables inside. Expressions in local values aren not limited to literal constants. They can also reference other values in the module to transform or combine them. These variables can be accessed using local.var_name notation, note that it is called local. when used to access values inside.

Data block's primary purpose is to load or query data from APIs other than Terraform's. It can be used to provide flexibility to your configuration or to connect different workspaces. One way we would use data block in future articles is to query AWS API to get a list of active Availability Zones to deploy resources in.

Modules are containers for multiple resources that are used together. A module consists of .tf and/or .tf.json files stored in a directory. It is the primary way to package and reuse resources in Terraform.

Every Terraform configuration has at least one model (root module) which contains resources defined in the .tf files. Test configuration we created in the third part of these series is a module.

Modules are a great way to compartmentalize reusable collections of resources in multiple configurations.

Here is an example of a module: 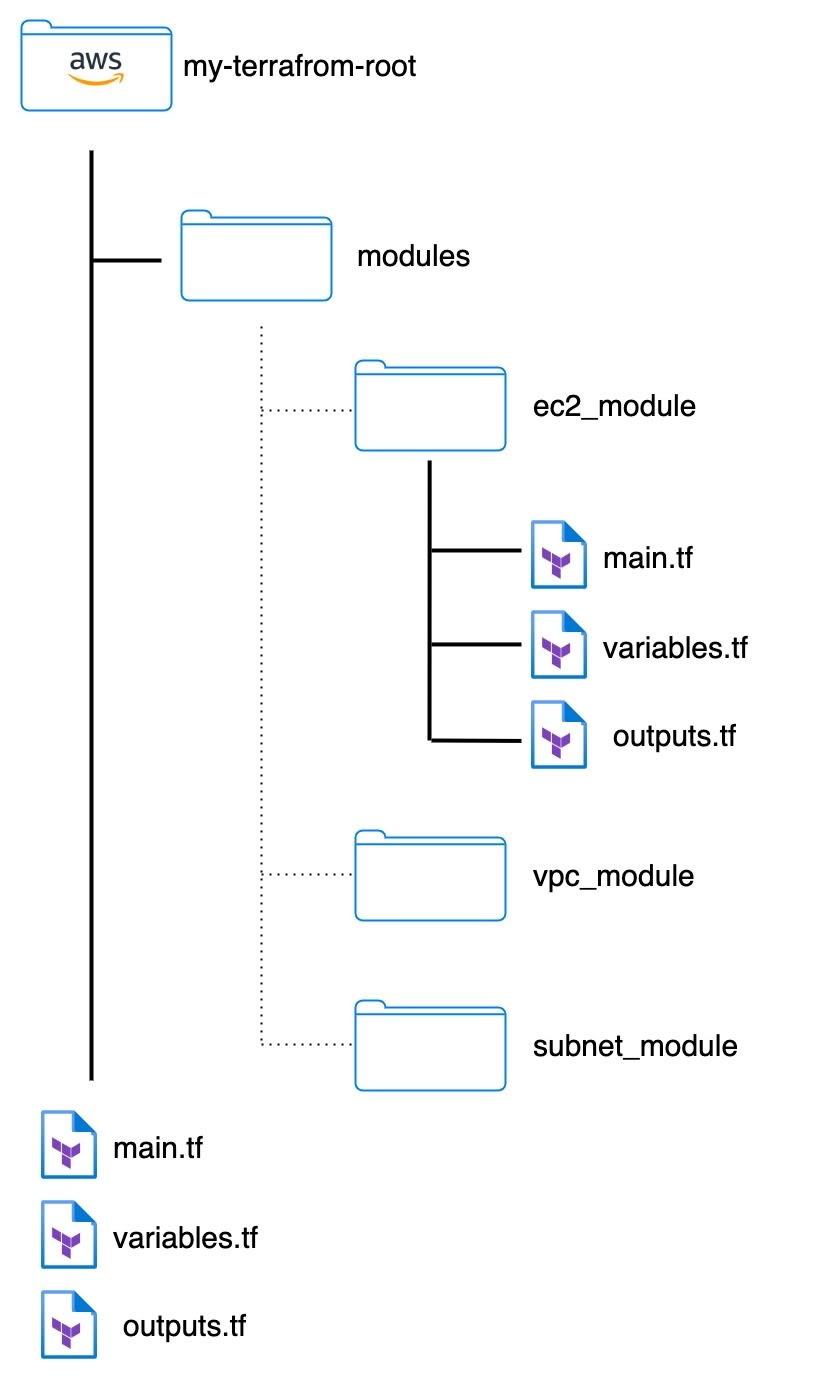 This is a block which is almost always present in all configurations, along with main.tf and variables.tf block. It allows Terraform to output structured data about your configuration. This output can be used by users to see data like IPs or resources names in one convenient place. Another use case involves using this data in other Terraform workspace or sharing data between modules.

Provisioners allows us to specify actions to be performed on local or remote machines to prepare resources for service.

There are two types of Terraform provisioners: local-exec and remote-exec.

local-exec invokes local executable after a resource is created. It runs the process on the machine running Terraform, meaning the machine where you run terraform apply. This is most likely your own computer.

remote-exec invokes remote executable, something like an EC2 instance on AWS.

This is an example of a provisioner for an EC2 instance. This example contains both 'local-exec' and a remote-exec:

This is the end of this rather lengthy article covering Terraform blocks. Now that we know what tools we have at our disposal we can start creating infrastructures that begin resembling something useful.

In the next article we will begin building an infrastructure. I will try to make use of most or all block covered here to get a feel for each of them. After that I will go back to covering topics for exam prep.

Thank you for reading and see you soon!

Once suspended, af will not be able to comment or publish posts until their suspension is removed.

Once unsuspended, af will be able to comment and publish posts again.

Once unpublished, all posts by af will become hidden and only accessible to themselves.

If af is not suspended, they can still re-publish their posts from their dashboard.

Once unpublished, this post will become invisible to the public and only accessible to Andrey Frol.

Thanks for keeping DEV Community 👩‍💻👨‍💻 safe. Here is what you can do to flag af:

Unflagging af will restore default visibility to their posts.