I started working on Selfies 2020 in April 2019, wanting to recreate a 1999 game called sissyfight 2000 with a modern twist. It is a 'tongue-in-cheek', social media game theory multiplayer game where players strategize to get followers. The followers a player gets depends on what the other players did that round. I am the sole contributor. 5 months later I wasn't done and I had a moment of reflection...why am I doing this? It was to learn more programming concepts (although it would be great if people played), particularly everything that goes into making an app production-ready from front to back. I also wanted to learn tech I didn't have much familiarity with, like Django and React Hooks. My ultimate goal was to make a production-quality app.

The project is not quite "production-quality", but I consider it mostly "done." If you want to support it, star it on github, play it, and offer your feedback!

I learned, by category:

1) Sketch is awesome. I’m not a designer but learned enough Sketch to improve my design. Importing google fonts, exporting svg/png/css, and using the iPhone components that come free with the 1000's of plugins greatly improved my design process. Plus you can prototype quickly:

4) If you do use a component framework, Grommet is a nice one that looks modern.

5) On the homepage, tell users what your webpage does. Make navigation very clear. I neglected navigation before reading this book. My homepage said "Click to enter!" without other info. I fixed these issues which might be obvious to a designer but were not on my radar.

6) Reset CSS to reduce browser inconsistencies. The link has CSS that standardizes how your site looks on different browsers.

7) Styling components inline is more manageable than using CSS in my opinion. It’s uglier, but having the styling in one file is easier. I sometimes move it to CSS later.

9) How to use flexbox, and that it doesn't look the same in Safari (Safari requires special -webkit prefixes to display flexbox). flex-grow is especially useful.
with flex-grow: 1;

10) Positioning a div in the middle of a screen isn't straightforward.

11) Set outline: none; when styling inputs and buttons or they will get an outline like the below when clicked/interacted with:

12) How to style a scrollbar. It's different in Firefox, which only added some support with Firefox 64 in 2018. I didn't style my scrollbars to be compatible with Firefox. For Safari and Chrome here is my CSS: 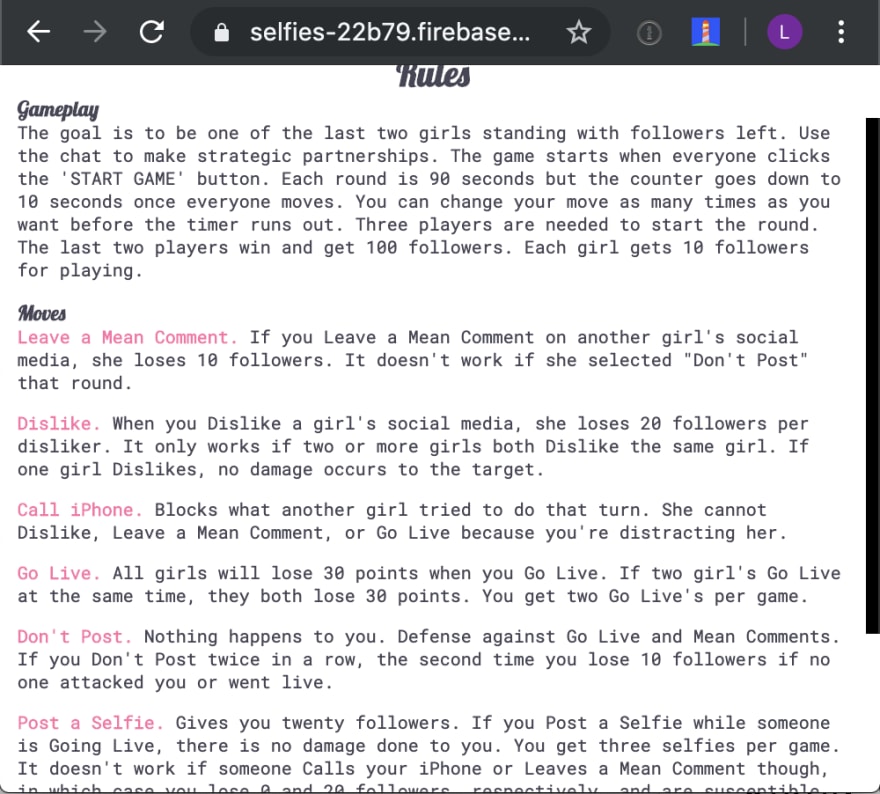 13) Objects, imgs, svgs. Initially, an svg I used on the landing page was 440KB and hard to resize dynamically relative to the pink div around it because it was basically a base64 embedded .png of an iPhone that I made into an svg (the wrong move). My bundle size was huge when just loading it directly and wrapping it in a React component. Some solutions I tried:

14) There are many ways to add animations in React. CSS is the best IMO. I say this based on two criteria: performance and simplicity. I looked at React Transition Group and some libraries. I spent a minute trying to learn transition group and was confused. Then I found this library. It has a bunch of awesome examples and you can copy the CSS for the animations you want into your CSS file so you don't have to import the entire library. I like to learn by example, so seeing all of these CSS animations gave me a sense of how they work.

15) A little bit of SCSS. I don't like adding packages, but this is a dev dependency that compiles to CSS. It has additive feature like letting you embed properties and lighten() or darken() by certain amounts. Here is an example of how I styled my button:

16) How to write vanilla JS websockets and integrate them with redux. 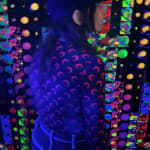 Write your own WebSocket middleware for React/Redux in 4 Steps

17) The next()function. I dove under the hood of javascript to learn more about iterators and generators when writing my websocket middleware.

19) You can’t use redux devtools with websockets without more advanced configurations.

20) How to use useRef with React Hooks. I needed to use this to scroll to the bottom of a div. This project was the first time I ever used React Hooks:

21) How to use PropTypes. I normally use Flow.js but tried PropTypes. PropTypes library has the benefit of telling you about type issues both in the code editor and the console.

22) How to share logic between components with React Hooks. I use a hook that determines the color of buttons in different components.

23) You need to return an empty array when using useEffect or your component may keep re-rendering. If you used any props though, you’ll get an error react-hooks/exhaustive-deps. To fix this, pass the prop you used to the array.

24) How to set environment variables. create-react-app makes it simple and I never appreciated how much create-react-app does for you. Just define an env.production and env.development file, and start your variables with REACT_APP_

25) How to create an Error Boundary. My code is a copy/paste of the example minus logging errors, which I might do if my app gets users.

26) How to analyze bundle size. The instructions are here.

Sample output from one of my builds: 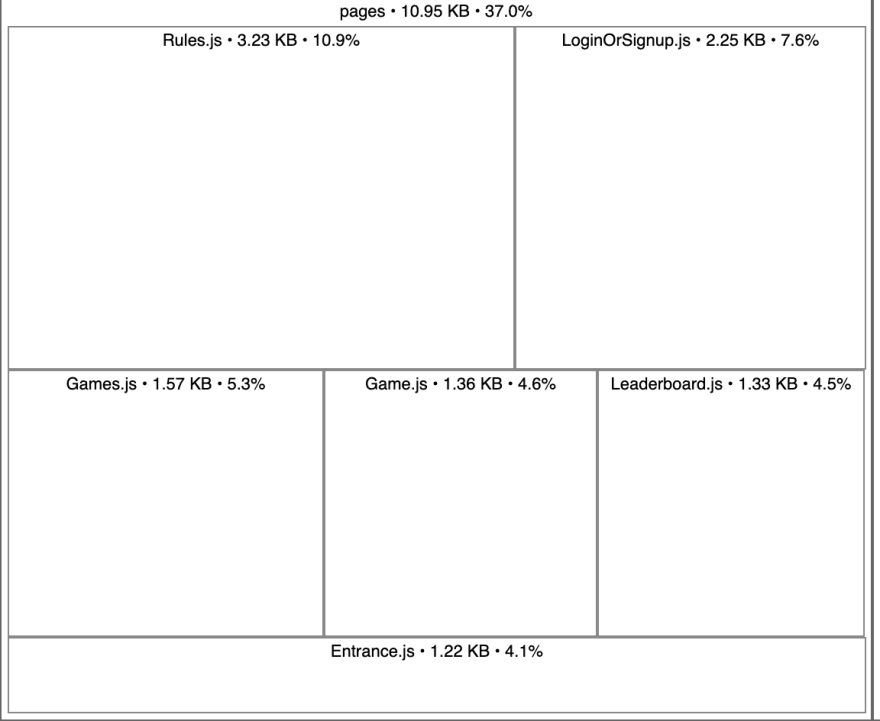 28) Safari does not support localStorage in private mode. I switched to storing the token with cookies. I wanted to support major browsers, which very much includes Safari for mobile.

29) The WS tab in the browser. I never noticed it or had any use for it before.

30) It's hard to change a model from a One-to-One relationship to a foreign key relationship in Django. I had to do four migrations and delete all of the records from my database to make it work.

31) Django get method returns an error if what you're getting isn't actually there. A get_or_none class is useful to either get the object if it's there or return nothing if not:

32) Overriding objects in Django. If I want to use the class defined above, I will need to override the objects Manager in Django. A Manager is how you perform database queries in Django (i.e. Model.objects.get, Model.objects.save, etc) and one named objects is added to every Django class by default.

33) What on_delete does on Django models. It's a SQL standard and I set it to MODELS.CASCADE so that if one item is deleted, the references to that item are also deleted.

For example, I have this definition in my models:

34) Django has a User model with built-in authentication, but you can't save stuff on it. This wasn't a problem for me until I wanted a Leaderboard. I solved this by creating a new model called Winner with a One-to-One relationship to the User model.

35) Custom error handling with Django REST framework.
I thought the way the error messages were constructed with Django Rest Framework was hard for the frontend to handle, and decided to override them.

36) Using Django Channels with token authentication is not ideal, and I had to write custom middleware. I've attached the token to the request because you can't headers with websockets.

37) How to use Django Channels. Working through the tutorial in the documentation and following this tutorial gave me what I needed to start my project. This is a big topic I may write a separate post about.

38) Set up pytest in a project. It’s fairly simple and one of the few setups where there isn’t some gotcha or bug that I need to fix.

39) Testing with pytest-factoryboy and pytest.

Writing Tests with pytest and pytest-factoryboy

Here is the code for that within my websocket class:

41) How to lint python with black. You type black and then the folder you want to lint and get:

42) What a webserver is. You don't want to use python manage.py runserver to start your server in production.

43) How to get Docker to work with Django Channels. For a while, no matter what I did, my server would not hot reload. I finally realized that my Dockerfile was in the wrong order after looking at this helpful example.

44) How to deploy Django Channels with Heroku. I did not deploy my docker container, but used a Procfile to start up my server.

45) How to find environment variables in Heroku, and what to do if they're not there.

Creating the app from the site didn't generate the environment variables I needed:

After creating the add-ons, I looked for my database url using heroku config but nothing appeared. What fixed it was deleting my add-ons from the browser, and then recreating them from the the command line

46) How to .gitignore files I've already committed. This isn't something I needed to do before, and because of that, it's a basic command that I overlooked.

47) To finish anything, just commit to starting. I didn’t want to work on the project a lot, especially when I was stuck. It’s important to say “I’ll make progress on one thing” today, and not worry about hitting a certain goal or spending X amount of time. By just starting most days, I’d sometimes work all day, or sometimes I’d do nothing.

48) It's hard to know what "done" means. Should I add a leaderboard? Does my game need to work on mobile? Do the rules of the game make for a "fun" experience? Ultimately I said no to all of these questions so I added the leaderboard, redid the CSS to look right on mobile, and completely rewrote the rules of the game. Now I think it's done but I have a lot more I want to add like:

49) Don't name commits "ok" out of laziness. This bad habit made it hard to find info for this post when looking through my commit history.

50) I don't learn well by watching tutorials or reading because I get bored and want the relevant information. I don't learn well with verbal explanations, especially with code, because people are often coming from a place of either knowing their subject matter too well or not knowing it at all. As a newbie you often can't tell the difference either. I learn best looking at code examples and sample projects.

51) Sometimes you cannot fix a bug for weeks. If that happens, work around it and revisit later when you have the mental energy. My game used docker with django channels for websockets. I had an issue where my docker server wouldn't hot reload. I had this issue for a long time and finally gave up by running everything locally. This let me make progress, and eventually I fixed the issue by copying the docker settings in one of the django channels sample projects.

52) It is a battle between trying to finish and trying to learn. I grew impatient wanting to finish my game. Still, I remembered my personal mission statement and that it didn't impact anyone but me if I finished or not. It's not like it's a useful package other people can use. I didn't have to refactor with React Hooks, configure linters, use propTypes, etc., but my goal was to try to make a production quality app and learn a lot of new concepts. Stick to your personal mission statement when doing a big project!

53) Backtracking is necessary sometimes. I defined a one-to-one relationship between my User and GamePlayer models early on. This ended up being the wrong design because there was no reason players couldn't be in multiple games and I had to make sure they were exited from a game, or they couldn't join another game. This wasn't really feasible. I had to

I also completely redid the rules of my game. I made them match the rules of the original game. This was a huge rewrite that ultimately made for a much better experience.

Is Ubuntu Or Fedora A Better Distro For Programmers?