Im starting my journey into OpenAPI and I think its the answer to a problem I didn't know I had!

The problem I hadn't noticed before

How many times have you wrote the backend API then the Frontend API Layer then the docs, Normally thats 3 peoples jobs or one if you are unlucky, but then you and the team have to keep that all up to date, its not easy, actually its a big bottleneck in development time and therefore cost.

So what if we could just sit down together and write a single yaml, human readable file that anyone could understand. A file single powerful file that could generate the server code for our chosen language/framework, the client code and the docs all in one central location, if you think about it, this makes perfect sense and what a time saver... That is OpenAPI

Getting started from a real life example:

I started writing my web application to make a load of money. How did I start it? With Frontend as usual and then realised that this would be doomed to fail as I never get around to doing all the backend work, its too huge then Id need a team to document it for future me. I need an easy button.

I've dabbled with and wrote many types of code-generation software in node over the years and I believe strongly that its an enormous time saver if we accept standardisation, let go of some of our, but I didn't write it syndrome, code-generation brings predictable development and quicker time to first release, that means more time doing fun stuff and less time being tedious.

Bun (API server) + Sveltekit (yes its fast with capital F, correct me if Im wrong but it should be Rust Actix web fast) the BS stack, it needs business logic right? I think it's time to read about this API design first approach, the glue between our Backend and our Client is the literal language they speak to each other, and by designing this instead first, we may have an easier time developing our application.

I will use a Frontend framework IBM Carbon and various other bits specific to my application.

Here is Insomnia working on a early prototype, its making my head hurt now i'm running out of imagination and I think I need to build something! 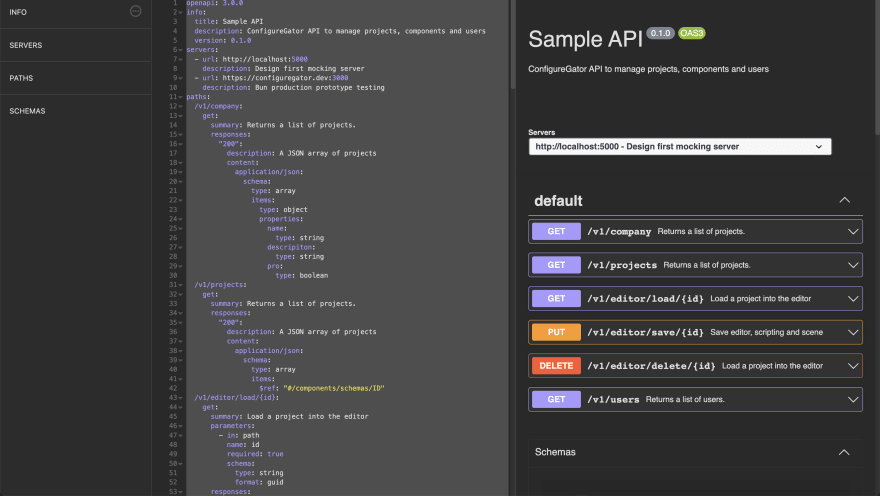 Redis Integration in SvelteKit: A Game-Changer for Session Management

4 Steps to Prepare for System Design Interview in 2023?[with Resources]

Svelte for Beginners: A Beginner's Guide to Building Web Applications

Adam Crockett
I work at ForgeRock as a Web Development Consultant at ForgeRock, I play with all sorts really. Lately WASM is my toy of interest.
The Art of Code Generator
#productivity #javascript #openapi #mongodb
🐊ConfigureGator, is it a good idea?
#discuss #kotlin #svelte
If OnPrem and Cloud where children
#webdev #architecture

Once suspended, adam_cyclones will not be able to comment or publish posts until their suspension is removed.

Once unsuspended, adam_cyclones will be able to comment and publish posts again.

Once unpublished, all posts by adam_cyclones will become hidden and only accessible to themselves.

If adam_cyclones is not suspended, they can still re-publish their posts from their dashboard.

Once unpublished, this post will become invisible to the public and only accessible to Adam Crockett.

Thanks for keeping DEV Community 👩‍💻👨‍💻 safe. Here is what you can do to flag adam_cyclones:

Unflagging adam_cyclones will restore default visibility to their posts.