GraphQL is becoming more and more popular to build amazing products with a modern stack, and that makes total sense (that’s the path we took at Escape as well 😎)

But as with any new technology, it comes with the downside of not having a lot of good resources.

So today, we address one of the most critical aspect: testing your GraphQL API!

This was originally posted on blog.escape.tech

Testing your API is important to make sure that the business logic of your software is running properly.

Writing tests will allow you to reveal bugs before they make it to production - which we absolutely want to avoid (especially if you deploy on Fridays 😬).

With tests, you can verify functionalities, reliability, performance, security, and all sorts of potential issues.

Finally, keeping a good testing coverage will ensure that future updates of your API are not breaking the frontend applications consuming it.

How is it different from REST?

The primary difference is that REST APIs have several endpoints to test, but in GraphQL you only have one (in most cases). Therefore, the structure of your tests will be different from the usual REST APIs.

Another important difference is that GraphQL is a strongly-typed language that makes it extremely convenient to detect bugs as you code, especially when working on a massive codebase.

How to test GraphQL APIs

Let's build the next Facebook (such a boomer move...)

Our graph of entities is going to look something like this: 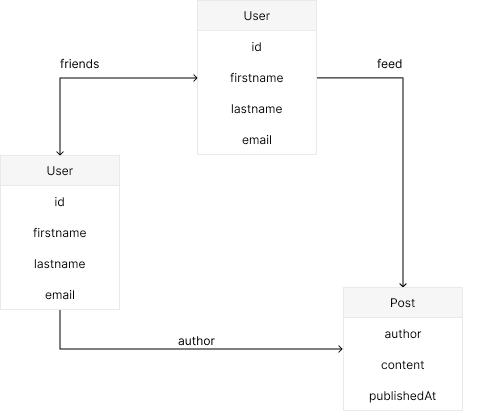 And our application will need features like sending a friend request (a mutation), and displaying a feed based on a users's friends' posts (a query - get latest posts from friends).

If you want to follow along, you can clone the repository here: https://github.com/achrafash/graphql-testing
and follow the instructions from the README file to install and run the project locally.

GraphQL is a strongly-typed language, which makes it very handy to detect errors directly from your IDE.

To validate our schema we can use two libraries:

Here's how to install them:

You can start with basic, manual testing on GraphiQL. But at some point, automated tests are a must.

The best way to isolate your queries and mutations is to use EasyGraphQL Tester, a library to run your GraphQL code without firing up a server.

We are not yet looking at how we are going to execute these queries and mutations to get or modify data, just their definition:

Resolvers are simply Javascript functions that we can test like any other Javascript code. Let’s go through an example with our resolver that gets the friends of a user:

Now we can put it all together with an integration test to make sure that all the components - schema, the query, and the resolver - are working properly:

We’ve seen how to test the GraphQL part of our API, but we left off an important aspect of it: the HTTP server.

The frontend applications will consume our API through HTTP requests, and it wouldn’t be a proper API testing tutorial without covering that part as well.

This time, we need a running server. We can use supertest, a library that does just that:

Now we can use it to run our server and send HTTP requests in our tests:

BONUS: Running tests in the CI/CD with Github Actions

Finally, a good practice is to run your tests in the CI/CD to make sure you don't deploy broken code to production. Github Actions are a quick and easy way to run your tests every time your push a new commit, and will break your pipeline if not all the tests are green ✅

We saw why testing your app is not an option, and how you can test your GraphQL API:

And if you want an in-depth security check of your GraphQL endpoint, head over to graphql.security to run a dozen of security scans. Completely free of charge, no login required.

Once suspended, achrafash will not be able to comment or publish posts until their suspension is removed.

Once unsuspended, achrafash will be able to comment and publish posts again.

Once unpublished, all posts by achrafash will become hidden and only accessible to themselves.

If achrafash is not suspended, they can still re-publish their posts from their dashboard.