Do you know you can automate a part of the work that you do every time during your development?

This includes running lint, test cases, etc. before committing and pushing the code. Git provides an excellent option to achieve this.

Git Hooks, being an advanced topic do you know why I call it as Dark part of Git?

Because, being a powerful feature it was not widely adopted by many software development teams (including me, but I follow an alternative. Read further to know what is it & why I’m using that).

Let’s try to explore the below items in this blog

What is Git Hooks?

Git Hooks is a feature of git that allows to run custom scripts on the occurrence of certain events at the git lifecycle. Some of the events include before-commit, after-commit, before-push, etc.

Why do we need Git Hooks?

Hooks is the tool that makes it much easier for developers to adhere to certain guidelines. These guidelines include running lint before committing, running test cases before pushing the code, etc. Git Hooks can be configured to make the action fail (by returning a non-zero exit code) if something was broken or not good (test case/lint failure).

Where can I find the Hooks configured on my repo?

Git Hooks comes pre-installed with the git repository. Whenever you initialize a git repo ( git init ) or clone a repo from any remote server ( git clone ). You can find all the hooks inside .git/hooks directory from the root repo.

Every hook will be configured as a file. By default, git creates 12 sample hooks file listed below. The files that end with .sample are example hook files generated by git.

Okay. That’s fine. I hope your next question will be,

What are all the available hooks which I can use?

This is not the entire list of all available Git hooks. These are the sample hook files that will be available by default on all git repositories. Head over to Git's official documentation to have a look at all supported hooks.

How to configure a hook?

The parameters of this hook are,

For example, I used to prepend my name in all the commits I made. We follow this across our organization.

As mentioned earlier, we need to remove .sample from the file name. Find the code below to template your name while committing

We need to make the script executable. So, running chmod +x on the file

Let’s try to commit our change, 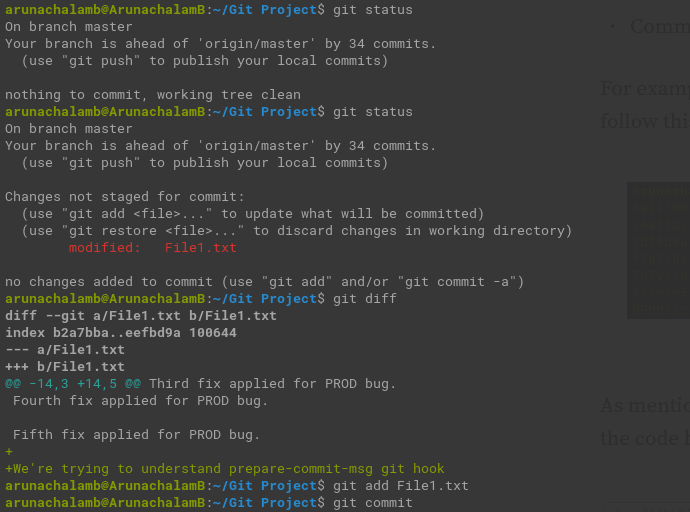 The Nano text editor (system default) opens up immediately after I ran git commit . From the below screenshot, you can see my name is already written to the commit message file (COMMIT_EDITMSG) and I just need to add the commit message.

That’s it. We have successfully setup prepare-commit-msg hook.

Let’s have a quick look at another simple example with a failure scenario.

The action will be failed if the hook(except a few) returns non-zero values.

I’ve 35 commits in my repo (haven’t pushed from the beginning of my blogging series). So, I’m not making any new commits and going to push the existing commits.

Let’s try to push the commits again and verify if it works.

Hooray!!!! Our commits are pushed to the remote repo.

The only concern is the error message which we received when exiting with a non-zero value was not so user-friendly. It did not say that it has failed due to an error thrown from pre-push hook.

Let’s jump into the next section of our blog

There are many reasons to answer this question. However, I’m outlining a few of the most common causes.

I have limited experience of using git hooks with my team.

But, I have an interesting question raised by Kumar from my team.

He asked, “I’m bad at shell scripting, but good at scripting in Python. Is there a way, I can run this hook in python?”

Even I don’t when he asks this question. But, we did a quick search immediately and found that it’s possible.

Just by replacing #!/bin/sh with the python interpreter location ( #!/usr/bin/env python ) will work. We even tested this and this works fine.

Hope you enjoyed reading this article. Give a ❤️ if you like this article. Subscribe to our newsletter to receive more such insightful articles that get delivered straight to your inbox.

Use GitHub Desktop to open your first Pull Request

#gitPanic - Working in a Repo

Once suspended, 5minslearn will not be able to comment or publish posts until their suspension is removed.

Once unsuspended, 5minslearn will be able to comment and publish posts again.

Once unpublished, all posts by 5minslearn will become hidden and only accessible to themselves.

If 5minslearn is not suspended, they can still re-publish their posts from their dashboard.

Once unpublished, this post will become invisible to the public and only accessible to 5 Mins Learn.

Thanks for keeping DEV Community 👩‍💻👨‍💻 safe. Here is what you can do to flag 5minslearn:

Unflagging 5minslearn will restore default visibility to their posts.