“On the Dangers of Stochastic Parrots: Can Language Models Be Too Big?” — Summarized

In short — Authors have raised global awareness on recent NLP trends and have urged researchers, developers, and practitioners associated with language technology to take a holistic and responsible approach.

Where lies the Issue?

Most notable NLP trend — the ever-increasing size (based on its number of parameters and size of training data) of Language models (LMs) like BERT and its variants, T-NLG, GPT-2/3, etc. Language Models (LMs) are trained on string prediction tasks: that is, predicting the likelihood of a token (character, word, or string) given either its preceding context or its surrounding context (in bidirectional and masked LMs). Such systems are unsupervised while training, later fine-tuned for specific tasks, and, when deployed, take a text as input, commonly outputting scores or string predictions. Increasing the number of model params/larger architecture did not yield noticeable increases for LSTMs; however, Transformers have continuously benefited from it. This trend of increasingly large LMs can be expected to continue as long as they correlate with an increase in performance. Even the models like DistilBERT and ALBERT, which are reduced form of BERT using techniques such as knowledge distillation, quantization, etc., still rely on large quantities of data and significant computing resources. 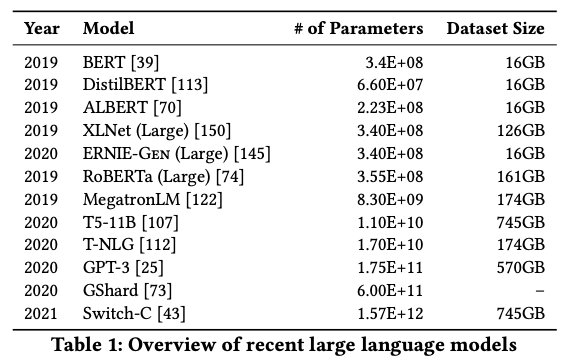 What are the Issues?

Risks due to misdirected Research Effort

Risks and Harms of deploying LMs at Scale

Human language usage occurs between individuals who share common ground and are mutually aware of that sharing (and its extent), who have communicative intents that they use language to convey, and who model each others’ mental states as they communicate. As such, human communication relies on the interpretation of implicit meaning conveyed between individuals. The fact that human-human communication is a jointly constructed activity is most clearly true in co-situated spoken or signed communication. Still, we use the same facilities for producing language that is intended for audiences not co-present with us (readers, listeners, watchers at a distance in time or space) and in interpreting such language when we encounter it. It must follow that even when we don’t know the person who generated the language we are interpreting, we build a partial model of who they are and what common ground we think they share with us and use this in interpreting their words.

We should consider our research time and effort a valuable resource to be spent to the extent possible on research projects that are built towards a technological ecosystem whose benefits are at least evenly distributed. Each of the below mentioned approaches take time and are most valuable when applied early in the development process as part of a conceptual investigation of values and harms rather than a post hoc discovery of risks.

We hope these considerations encourage NLP researchers to direct resources and effort into techniques for approaching NLP tasks effectively without being endlessly data-hungry. But beyond that, we call on the field to recognize that applications that aim to mimic humans bring a risk of extreme harm believably. Work on synthetic human behavior is a bright line in ethical AI development, where downstream effects need to be understood and modeled to block foreseeable harm to society and different social groups.

Please find the original article here and refer to its references not mentioned above. If this post saved your time, don’t forget to appreciate it.

What is YOLOv3 model?

How to Create a Dashboard with Google Analytics Data?

Data Science Use Cases For 2022