VSCode has some great debugging features. In a previous post, I already explained how easy it is to debug a React app using Chrome and VSCode. This time I'll focus on debugging a single JavaScript or TypeScript file.

The typical way to debug a JS file is to use the JavaScript debug terminal. Such a terminal can be opened via the menu:

Simply set a breakpoint in your JS file and run the file you want to debug in the terminal, either directly by running node <file> or via a package script by running npm run <script>. The debug terminal automatically attaches to the starting Node.js process and stops at your breakpoints. This also works with TypeScript if you use ts-node <file>.

However, this process can be automated by creating debug configurations that open the JavaScript debug terminal and automatically execute the currently open JS or TS file with just one click. First, we need to create the .vscode folder in our workspace and then create the launch.json file in it. This file defines a list of options to run or debug the project.

Let's briefly go through the anatomy of a configuration:

The main difference between the configurations is the command we run to start a debug session. If we are working with JavaScript, we can simply run node. On the other hand, if we are working with TypeScript, we need to use ts-node instead. Furthermore, it is sometimes useful to run a predefined NPM script from package.json. This is especially useful for debugging test cases that need to be executed by a test library like Jest, Mocha, Karma, etc. In this case we can run the npm run test script.

The variables ${fileBasenameNoExtension} and ${fileDirname} are placeholders and will be replaced upon start. The following predefined variables are supported:

The full variables reference is available on the VSCode documentation.

Finally, let's try it out. Open the Run and Debug section in the left sidebar and choose one of the configurations we just created, depending on which file you want to debug. I quickly grabbed a sample server script from Node.js. Then set your breakpoint and click the Run icon at the top to start the debug session. 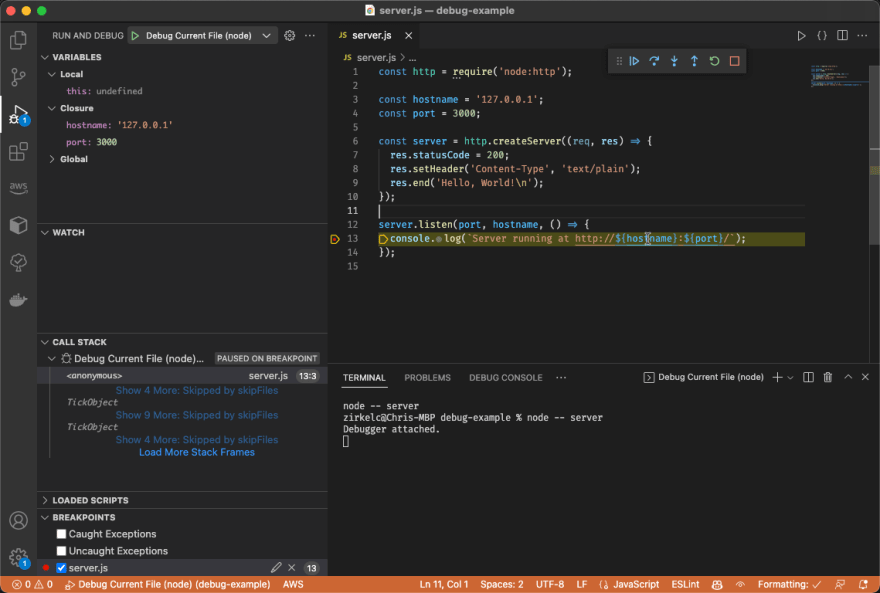 Once suspended, zirkelc will not be able to comment or publish posts until their suspension is removed.

Once unsuspended, zirkelc will be able to comment and publish posts again.

Once unpublished, all posts by zirkelc will become hidden and only accessible to themselves.

If zirkelc is not suspended, they can still re-publish their posts from their dashboard.

Once unpublished, this post will become invisible to the public and only accessible to Chris.

Thanks for keeping DEV Community 👩‍💻👨‍💻 safe. Here is what you can do to flag zirkelc:

Unflagging zirkelc will restore default visibility to their posts.